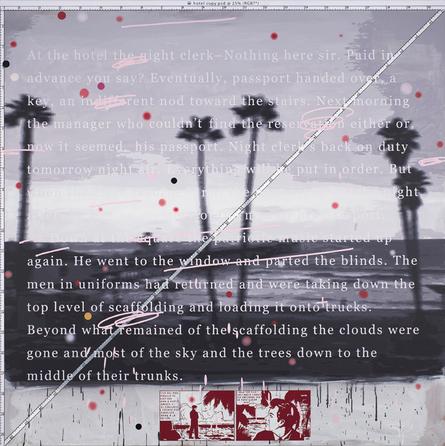 Vernon Fisher, artist and pillar of the Texas scene (and based in Fort Worth) has a retrospective opening at Mark Moore Gallery in Los Angeles on June 18.

Fisher’s work is in the permanent collections of nearly every major museum in the U.S., and the Modern Museum of Fort Worth held a major retrospective of his work in 2010-11. The curator of the Mark Moore retrospective is Hugh Davies, Director of the Museum of Contemporary Art San Diego.

Hugh Davies first saw Fisher’s work in the late seventies and was immediately impressed with the combination of conceptual rigor, and consummate craftsmanship. Davies, along with co-curator Madeleine Grynsztejn, organized a mid-career retrospective of Fisher’s work at the Museum of Contemporary Art San Diego in 1989. In the accompanying catalogue essay, critic Dave Hickey stated that Fisher works in a kind of formula of “imperfectly analogous juxtapositions of three imperfectly distinct kinds of phenomena (the personal, the social, the natural), described by three imperfectly distinct information systems (the literary narrative, the iconographic image, and the cartographic grid).”

The exhibition will run through July 18. For more info, please go here.