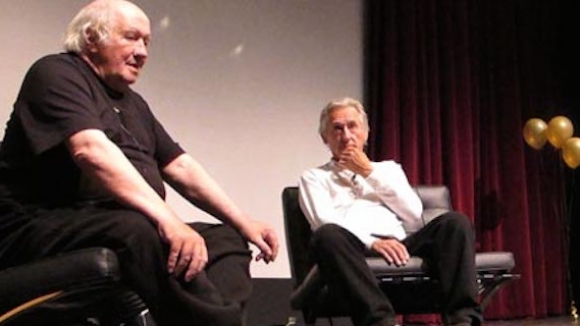 Not only are Texas galleries and museums in the midst of a plethora of post-holiday exhibition openings, there are also some fantastic upcoming art talks. Here are a few that take place in the next few days.

Tonight, Wednesday, January 20 at 6pm, artist Ed Ruscha chats with writer Dave Hickey at the Blanton auditorium in Austin. These two old buddies should have some interesting stories to share.

The Blanton is on a roll with the writer/artist discussion thing because tomorrow evening, it will present artist Donald Moffett in conversation with writer Jim Lewis. Moffett, a founding member of Gran Fury, has a show up at the Blanton through February 28 and an exhibition opening at Lora Reynolds this Saturday. Jim Lewis is an Austin-based novelist who has written extensively on the visual arts for dozens of magazines, and collaborated with Larry Clark on the story for the movie Kids.

So, you may as well stick around a few days in Austin.

Unless you want to hop down to Houston for the second in the series “Charles Ray: Thoughts on Sculpture” at the Menil Collection. On Friday, January 22 at 7pm, Ray will give a talk entitled “Matisse & Super Clay: Thoughts on Bronze in Rodin, Degas, and Matisse.”

P.S. If all this starts you on a literary binge, check out the Gulf Coast Magazine Reading Series at venues throughout Houston, or the Arts & Letters Live program at the Dallas Museum of Art, or Art League Houston’s new “Art Work: A Reading and Discussion Series,” focusing on the artist’s labor and value within the larger economic landscape, which begins later this month.