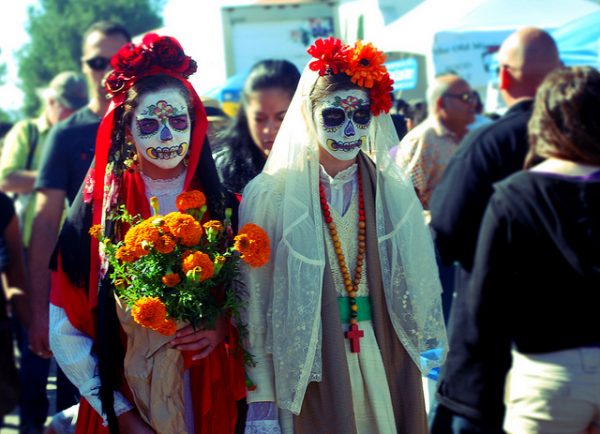 From October 31 – November 2, 2018, individuals and organizations across Texas will celebrate Día de los Muertos (Day of the Dead ), a Mexican holiday focused on the remembrance and celebration of deceased friends and family members. Though in total there are too many festivities, community events, and parties to count, below is a small preview of the activities happening at Texas venues.

Lawndale Art Center and Multicultural Education and Counseling through the Arts (MECA) have partnered this year to present the 31st iteration of a show and silent auction of retablos. Curated by Theresa Escobedo, this exhibition aims “to return the sacred practice of retablo making to its cultural roots and to integrate Lawndale’s annual event into MECA’s month-long celebration of Día de los Muertos.” Although the culmination of the retablo show is an auction, which will take place on November 2 from 7-10PM, there are many events MECA has planned in the meantime: a Día de los Muertos Festival that runs October 27 and 28 from 11AM to 7PM including a musical and literary ofrenda on the 28th at 4PM; and a Houston Latino Film Festival on November 2. Visitors can also see a show of community-made altars throughout the festival.

From November 1-4, the National Museum of Funeral History will celebrate Día de los Muertos with an educational exhibition about the holiday. It will feature interactive activities and altars created by local artists.

The Guadalupe Cultural Arts Center’s festivities will take place on November 2 from 6-10PM, and feature workshops and the launch of a new book by Barbara Renaud-Gonzalez about the life and work of voting rights advocate Willie Velasquez. There will also be performances by the Guadalupe Mariachi Academy and Guadalupe Dance Academy, and a show of altars created by artists, families, and organizations.

The Lone Star Art District will be celebrating the Day of the Dead from 5-10PM on November 2. It will include community and artist-created altars, performances by Urban 15, Antonia Padilla and Crystal Flores, and video works by Luis Valderas and Luis M. Garza.

SAY Sí will present its Muertitos Fest on November 2 (6-10:30PM) and 3 (12-4PM). The festival will help provide an educational component to the holiday, and will include: “a multidisciplinary showcase of student art, altars to honor the departed, family folk art workshops, food booths, an artisan mercado as well as live cultural performances highlighting local dancers, musicians and entertainers. With the theme, Sin Fronteras (Without Borders), this year’s festivities will focus on the vibrant indigenous cultures of Mexico and the origins of this significant celebration.”

From October 27 – November 3, the Latino Cultural Center will present an exhibition of Día de los Muertos-themed artworks and altars. The show “hopes to highlight work that is reflective of honoring our deceased loved ones and celebrating all that they represent.”

The Artes de la Rosa Cultural Center for the Arts’ Día de los Muertos festivities on November 2 from 6-9:30PM include a show of works by Latinx artists, performances of traditional Mexican dance and music, film screenings, activities for kids, and more.

On November 2 (5-9PM) and 3 (1-4PM), the Emma S. Barrientos Mexican American Cultural Center will host performances, an exhibition of community altars, workshops, and more. The event will also feature vendors, food trucks, and musicians, all showcasing various aspects of Mexican and Hispanic cultures.

Although the Mexic-Arte Museum already hosted its Día de los Muertos parade, an exhibition on view at the institution highlights the museum’s 35-year history celebrating the holiday in Austin. The show will be on view through November 25.

While not Día de los Muertos-specific, the Museum of the Big Bend in Alpine is currently hosing an exhibition of retablos collected by a Texas couple. The show opened on September 21, and will be on view through March 24, 2019.

Of course, this is just a small list of the countless Día de los Muertos events happening across Texas. Do you know about something we didn’t mention? Tell us in the comments.

Day of the Dead in Art Showcases an...

Is Day of the Dead More Indigenous or...

New Rules! Lawndale Mixes It Up For This...

There’s also a show at the Bathhouse in Dallas. “Fios de los muertos: Memories in verse”.

K Space Contemporary and Axis Tattoo in Corpus Christi throw one of the largest Dia de los Muertos celebrations in the US. Our event covers 12 city blocks and features 3 stages with live entertainment, Lucha KaBoom wrestling event, an Ofrenda display in the historic Ritz Theater, Kids Activities, over 100 vendors and art-making demonstrations by Texas A & M University-CC Sculpture (Hold Steady Iron Pouring Crew) and Printmaking (Full Court Press). We have a Dia de los Muertos Youth Art Exhibition and national juried exhibition, as well as a K-12 Piñata contest. Tens of thousands attend the event each year. Next year, the festival will be held on November 2, 2019. Here’s a great video from this year’s event (Oct. 27): Check it out!