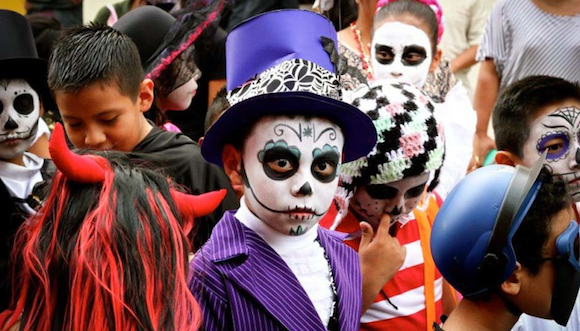 Some places have already celebrated Día De Los Muertos (Day of the Dead), gathering family and friends to pray for and remember friends and family members who have died, and help support their spiritual journey. But this Mexican holiday, which traditionally takes place on October 31, November 1 and 2, still has a lot of party going on throughout Texas.

Mexic-Arte Museum’s claims that its annual Viva la Vida Festival is Austin’s largest and longest-running Day of the Dead event. On October 29 from 10–8pm in downtown Austin, the event wil feature a grand procession and street festival (from Congress to San Jacinto) with artist vendors, live music, food trucks, and community altars. Art activities for children and families will be also be available in the neighboring Frost Bank Tower Plaza, where the public will have an opportunity to take pictures with parade props, including large-scale moving sculptures and mojigangas.

Houston’s Lawndale Art Center will host its opening of the Retablo Exhibition & Silent Auction on October 27, 7–10pm. On November 1, 6–8 pm, Lawndale will present the Musical and Literary Ofrenda with the River Oaks Chamber Orchestra (ROCO) to celebrate Día de los Muertos with presentations by ROCO, Musiqa, and Inprint. On November 2, 6–8pm, it is presenting artist Grace Zuñiga, who will discuss the history and symbolism of Día de los Muertos and the significance of home altars in historical and contemporary practice. On November 5, from 11am–4pm, Lawndale will host a Family Day Fiesta, featuring workshops, chalk drawings, a scavenger hunt and more.

The San Angelo Museum of Fine Arts will host Art After Dark: Dia de Los Muertos on October 27, 6–9 pm, with art activities, dance, food, and more. For more Day of the Dead activities throughout the state, go here.