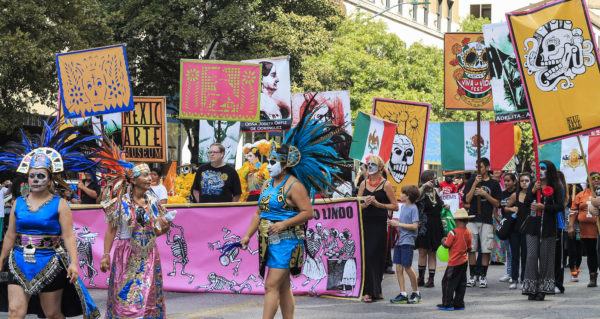 Starting this weekend, multiple art spaces across Texas are hosting exhibitions and special events celebrating the Mexican holiday Día de los Muertos (Day of the Dead). While this year’s holiday officially begins on October 31 and runs through November 2, galleries and cultural venues aren’t waiting until then to kick off their festivities. Find a list of some events happening across Texas below.

Lawndale Art Center’s 30th annual Día de los Muertos retablo exhibition is on view now through November 2 and features community programs, including a family fiesta day (today from 11am to 4pm), and a musical and literary ofrenda (October 30 at 5:30pm).

In San Antonio, the Guadalupe Cultural Arts Center is hosting a Día de los Muertos celebration today from noon to 6pm featuring arts and crafts workshops and performances. On November 2, at 10am, the organization will host a lecture discussing the holiday’s traditions, including the music and dance surrounding celebrations. The Guadalupe also has an exhibition of community altars on view from October 28 to November 9.

The Bath House Cultural Center in Dallas is celebrating the Day of the Dead with a month-long exhibition of artworks about the holiday. The exhibition, Día de los Muertos: The Path of Winged Souls, opened on October 14 and is on view until November 11.

If you’re in the central Texas area, we have a great exhibit of Dia de Los Muertos works by artists Jessica Salazar McBride and Jose Vargas at the Cultural Activities Center in Temple. We’re also hosting a jewelry workshop on Saturday, Nov. 4 at 2-4pm. https://www.cacarts.org/current-exhibits