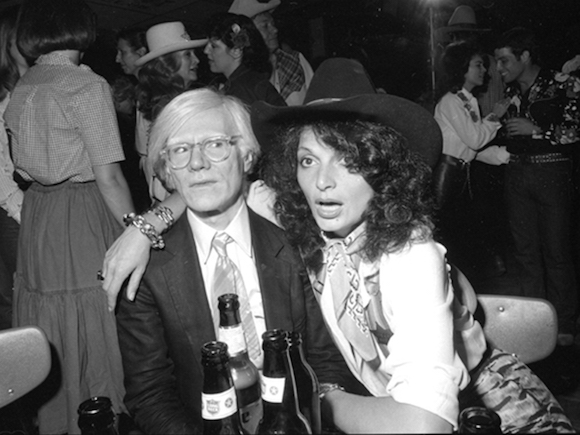 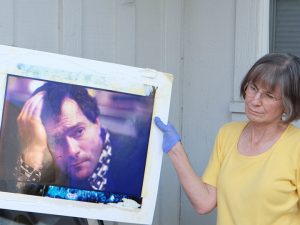 Rubin, who chose UH as recipient after a tour of the UH Libraries Special Collections, slowly began to scan her collection with the idea of the donation sometime in the future. Then Hurricane Harvey hit. Seeing the works that were damaged or destroyed motivated Rubin to pick up the pace to preserve and archive the photographs. Grants from the Harvey Arts Recovery Fund helped Rubin hire UH student and library assistant Micaela Cadungog. “One thing I am really learning from Janice is how to train my technical eye,” Cadungog explained. “For example, she will hand me a sheet of slides and ask me to pick out an image to scan, then we will discuss why I picked that particular image,” Cadungog named her favorite of the collection: the one of Andy Warhol and Diane Von Furstenberg at Gilley’s club in Pasadena for the 1980 premiere of the movie “Urban Cowboy.”

“It is such a valuable collection. Not just to people studying art history and artists, but it will also be useful for people studying energy and sustainability and world events,” said Mary Manning, university archivist and curator of the Performing and Visual Art Research Collection. “I think it’s going to be a well-used collection.” “The Janice Rubin Photographs” are available for viewing in the Special Collections Reading Room on the second floor of the M.D. Anderson Library at the UH campus. 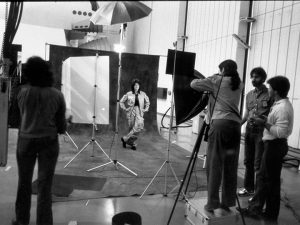 Rubin has been a Houston-based photographer since 1976. (She is married to artist Charles Weise). She specializes in corporate and editorial photography, so she has worked with many corporate and non-profit organizations. Her photographs are also included in the permanent collection of the Museum of Fine Arts, Houston, as well as many private collections. Rubin served as a board member of the Houston Center for Photography from 1988-1994. She served the City of Houston as a member of the Houston Municipal Arts Commission, 1986-1994, and Arts Task Force-Cultural Arts Council of Houston, 1991-1993, both Mayoral appointments. She was the creator and project manager of Windows on Houston, a rotating juried photography exhibit at Houston Intercontinental Airport, 1987-1996. In 2007, the Houston Grand Opera commissioned Rubin to create photographs of recent immigrants to accompany a new opera, The Refuge, and the photographs served as the backdrop for the production.

These archives at universities serve as an important home for local histories. Most recently, UH acquired the archives of Houston documentary photographer Ben Tecumseh DeSoto. With this addition, the UH Libraries Special Collections must be holding hoarding the weird history of late twentieth-century Houston.

The correct name of the other photographer mentioned is… Ben Tecumseh DeSoto.