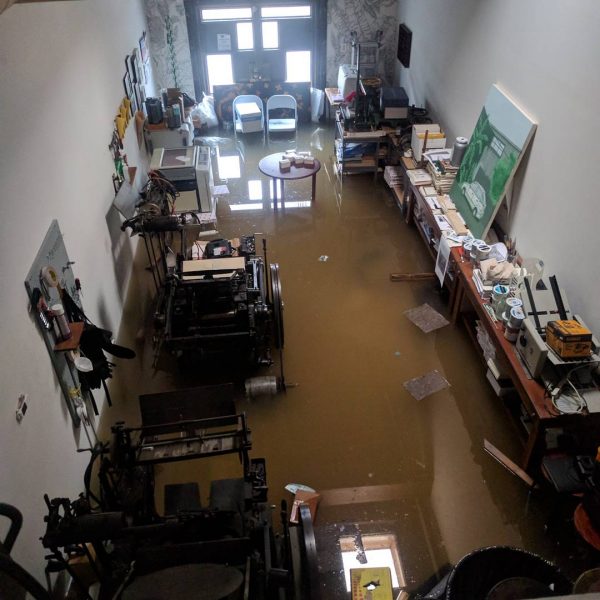 The weeks after Hurricane Harvey were devastating for the entire region. Hundreds of thousands of people were displaced and left searching for a safe, dry space. While there were some safety systems in place, mandated by regional and national government entities, there was a lot of damage that didn’t fit the criteria for this storm level. Homes and businesses had various types of insurance coverage to help recover what was lost, but what about the businesses that don’t fit conventional guidelines, like the self-employed artists all over the region?

As everyone checked in on friends, family, and loved ones, Rachel Cook (then still curator at DiverseWorks) began calling around to DiverseWork’s advisory board. As she made call after call, she realized so many artists, dancers, performers, and musicians had lost a great deal of property, and their means to a livelihood, that they could not possibly replace. “Creatives” fall into a gray area when it comes to day-to-day operations. After a grueling week of such check-ins, Cook, in collaboration with Galveston Art Center curator Dennis Nance, began working with other local non-profits and institutions to compile a list of artist’s needs, and to begin collecting funds for assistance and recovery. The Harvey Arts Recovery Fund was created to help creatives locate resources, assistance, and grants to start the rebuilding process. The new entity would fill a much-needed void.

At the time, I was able to check in with four artists within the Houston art community, and I’ve followed their stories for a year. 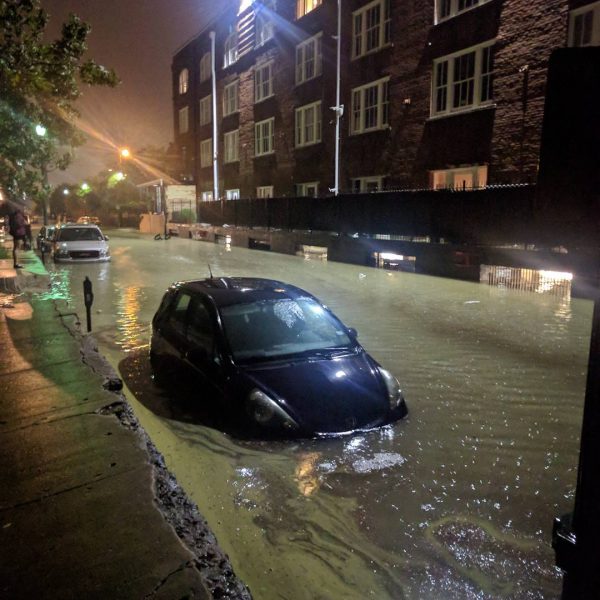 Sarah Welch and James Beard are artist and printmakers, and run a production operation called Mystic Multiples, which produces zines, comics, and limited-run prints. On the eve of the storm, the couple woke up at about 2 am and found that the water in the street was already approaching the level of their building’s loading dock. Water began entering in all sides of the studios, and by the next morning was filling up the studio and business (see image at top). 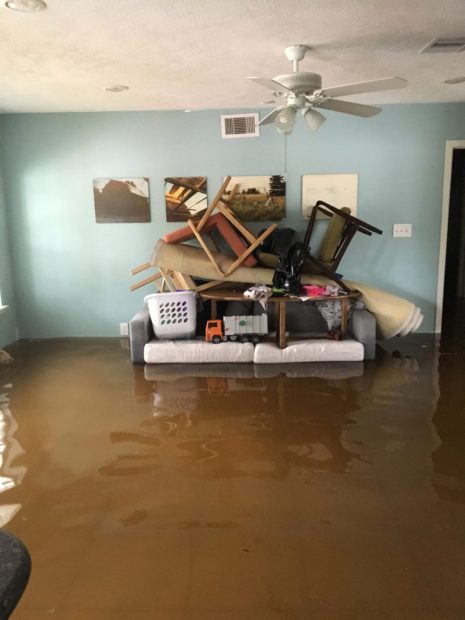 Across town in Meyerland, photographer Keliy Anderson-Staley, along with her husband and two children, were nervously watching the water outside. They had very little time to move their kids and a few belongings before the water began to rush in to their studios, overtaking personal belongings, photography equipment, and archives. There was no time to make judgements on what to save and what to leave. The water came in too fast.

The story repeats for other artists. “We had only about 20 minutes to move when the water started coming in,” writer and artist Sara Cress says. “We ended up with 33 inches in our home, overtaking all of our possessions and home.”

These four artist are but a small sample of those who lost almost everything. The problem is: How do you assign a reimbursement value on artworks, archives, hard-copy writing, and loose works in flat files? It’s a hazy business, evaluating unsold works and well-used equipment, tools, and spaces. Across the region, many bodies of art work were left in heaps, rotting from the water damage. The artists were reliant on the help of their own artist communities.

“It broke my heart, because you are filled with gratitude that people want to help, but no one wants to be in a position where they have to ask for that much,” says Welch, as she looks back. The artists had to rebuild their whole operations, which had taken them decades to be able to afford.

The social-media campaigns kicked in in the days following the storm: individual artists were able to rely on some community support to raise funds to partially cover what had been destroyed. Helpers showed up in droves to move ruined equipment, tear out drywall, and create massive piles on the street of what was turning out to be the ruined retrospectives of decades of art work. The process didn’t take merely weeks, or even months. One year on, and the artists are only now beginning to feel any sense of a return to being productive, and just in time for another season of hurricanes.

Cress says, “It was really six months of hard labor for both of us before we could consider anything normal. Then we could live in the house again, but was another four months after that before the house was finished. I’d say we were back to normal by around May of this year, and were completely finished by the end of June.” The material loss is only part of these stories. The emotional trauma of loss was another. Cress explains, “I already suffer from anxiety on regular days, so after Harvey my brain was obliterated. I would swing wildly between depressed and anxious. I had a lot of trouble hearing rain, feeling rain, driving through rain. I went to therapy, I went to a resiliency workshop, I got an increase of my anxiety medication. I dealt with a lot of rage about losing so many of my things.” Like so many others after Harvey, these artists were and are suffering from PTSD.

PTSD (Post Traumatic Stress Disorder) is not exclusive to war veterans. It can stem from any major trauma. It’s hard for some to understand how and why this happens to some and not others. It’s not normal to wake in the middle of the night to water rushing in from all directions, and the days of walking through knee-deep water in what was once your home and work quarters is a nightmare.

Anderson-Staley explains: “My kids talk about the storm a lot, and ask if we are going to flood again every time it rains. I feel the same way: every rain events makes me anxious. I am dreading the anniversary, because I don’t feel like things are more secure for us in terms of flooding; I know it could happen again. I have had to seek out therapy, because it is the kind of thing that is hard to talk about. 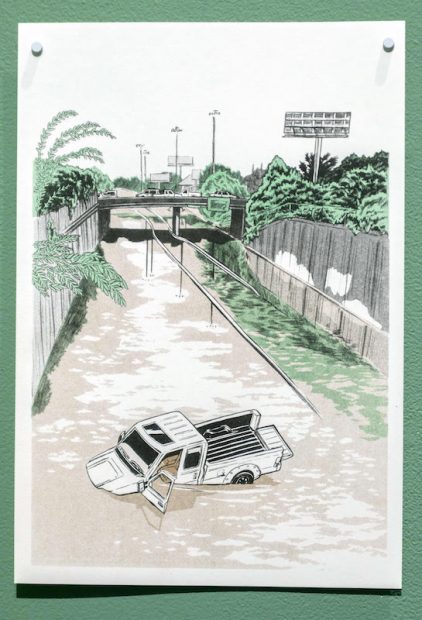 “You feel like people don’t want to keep hearing about the life upheaval that the storm caused, and that they can’t ever fully understand why you aren’t over it.” So, as an artist, how do you deal with physical and mental recovery when you often work twice as hard as the next person to make a sustainable living? Welch expresses the utter drain  of piecing it all back together. Months of these artists’ scheduled projects and exhibitions had to be canceled in the wake of the storm; the damage caused a huge hole in their incomes. Projects and shows were cut out or dropped completely, and the rest piled up on top of pre-existing events already on the calendar. “I think we were almost back to normal in six months,” says Welch. “There are still things today that need attention or need replacing, but they are small enough to live without. The worst thing is the loss of time. Many projects got thrown off and we’re still trying to play catch-up on those.”

Getting back into the routine of producing work is tough. Most of the artists have remained in their original studios and spaces with the hope the past won’t repeat, but they know it will. Many of the recovering artists have moved their surviving artwork (and precious backups) to higher ground, galleries, and off-site locations. The lesson of loss is burned into their practices, and will always be first thing they think about when archiving. 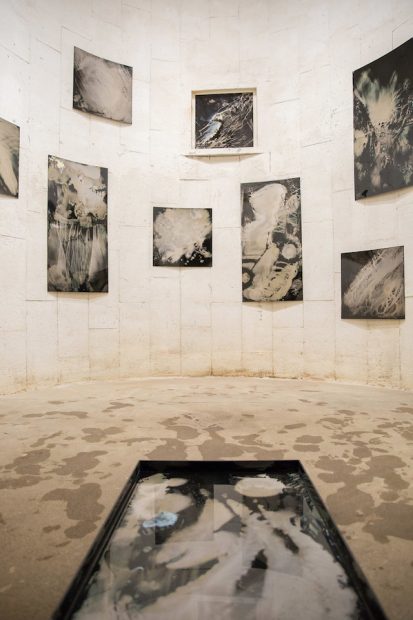 Moving toward the future, this group of artists realize some of their old motivations and works will be changed forever, and the idea of their works have evolved, post-disaster. Anderson-Staley says, “My work has been changed a bit by the storm for sure. Many of my recent projects, Diving into the Wreck, an installation at the Silos for Sculpture Month; a public installation called Shelter in Place; and a series of recent abstract works have all been indirectly about the storm or at least deeply influenced by it. It’s hard to know how much Harvey will continue to impact my practice long-term.”

The city, of course, is reevaluating its storm and flood plans, and so are the communities within it. A forced adaptation has taken place, and a new kind of regional resilience is manifest. Anderson-Staley, Beard, Cress, and Welch have new beginnings, and remain active today within the Houston scene. Their attitudes about work, home, income and stability and safety have been reshaped by Harvey, and each artist hopes to be stronger for it.