Kamrooz Aram at the Modern Art Museum of Fort Worth 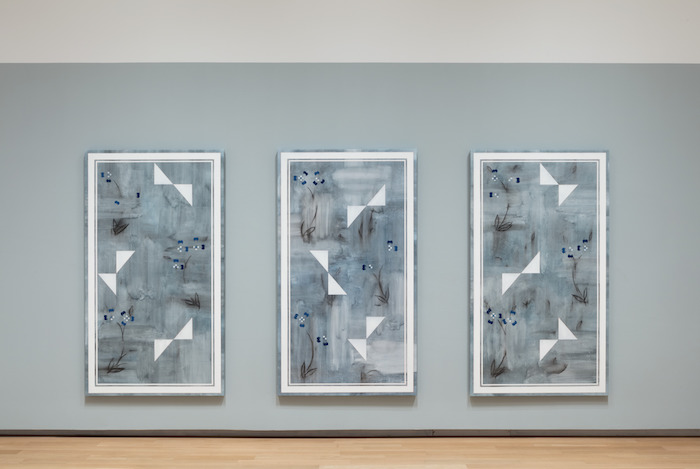 Installation shot: Focus: Kamrooz Aram at the Modern Art Museum of Fort Worth

I worked as a gallery attendant at Fort Worth’s Kimbell Art Museum back in 2005 when the exhibition Palace and Mosque: Islamic Art from the Victoria and Albert Museum was exhibited there. It was my introduction to Islamic art and was a comprehensive display of the V&A’s renowned Islamic art collection. I spent most of my shifts studying the pieces in the show. Ornamental vases, minbars, kaftans, and other lavishly decorated textiles were displayed in each of the galleries, and the Louis Kahn building’s western architectural elements contrasted with the ornate artifacts displayed in the show. Of all the remarkable things in Palace and Mosque, the Chelsea Carpet may have been the most remarkable. At around 10 x 17 feet, the 16th-century Iranian carpet, barely illuminated in the dimly lit gallery, was installed on a 45 degree angled ramp to accommodate a broader view.

Thinking back on Palace and Mosque, I can begin to understand how Kamrooz Aram’s Ornamental Compositions for Social Spaces takes shape in his current exhibition Focus: Kamrooz Aram at the Modern Art Museum of Fort Worth. He considers the Persian carpet for its parallels to painting, stating that they are “rectangular objects that we live with, display in interiors, and which often have content that is symbolic or otherwise, despite their reputation for being purely decorative.”

In his museum lecture about the Focus show, Aram shared an excerpt from his book Unstable Paintings for Anxious Interiors, titled the cover- up. He reveals an affinity for Cy Twombly’s paintings and characterizes Twombly’s approach as seeking “The uninhibited mark,” a kind of intuitive, unencumbered mark, unbridled by intent. The passage muses on the sights and sounds of the streets of Brooklyn and Istanbul, reveling in the idea of graffiti as ornament in the urban landscape. Aram then examines the practice of neutralizing graffiti as a form of labor that contains the uninhibited, intuitive mark.

This intuitive mark is something that Aram observes between the functionally decorative and the conceptually active spaces between Modernism and the legacy of abstract painting. There is enough evidence of design and function in Aram’s paintings, though, to consider them outside of a study of pure form and abstraction. Triangles emerge from sections of grids as they rotate and reflect in Fibonacci-like spirals around each composition, recognizing, as the Focus introductory text states, that the motif had been used by artists as far back as the 11th Dynasty in Egypt. 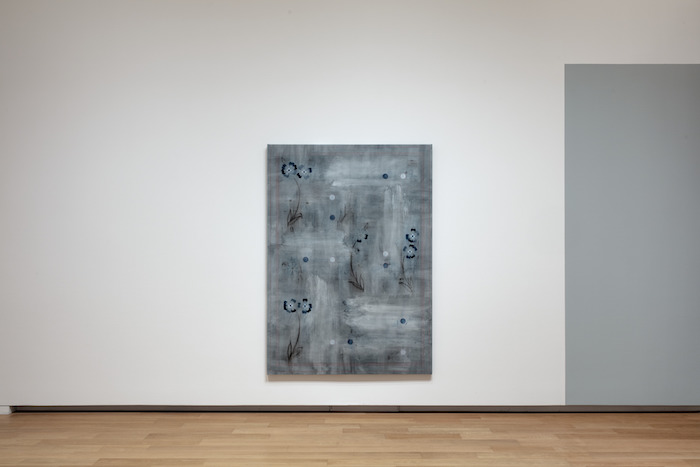 Shapes and patterns in Aram’s Focus paintings are contained in precise rectangular borders that mimic the carpet designs from which they are derived. Borders of blue and white, painted inside of blue and red guidelines, begin at the very edge of each painting, with each successive border framing the next, until exploded views of floral patterns dot the surfaces across the canvases. Sometimes symbolizing rebirth or prosperity, these floral symbols emerge from light washes of paint, moved about in swatches of soft strokes that abruptly lift from the surface, leaving evidence of movement in all directions and recording the erasures of repainting of patterns. 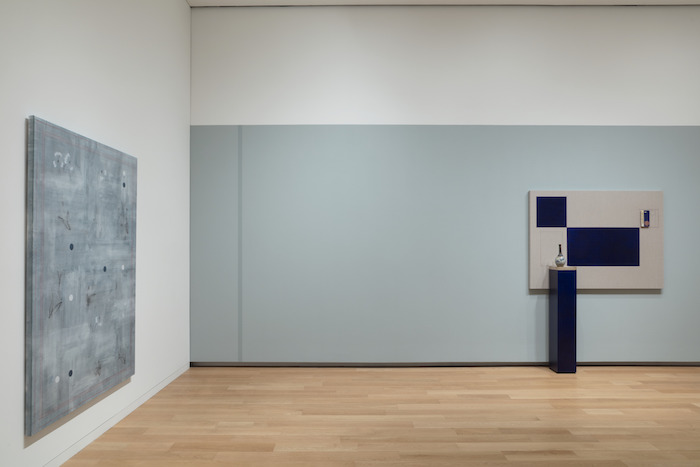 There is a Barnett Newman-esque zip painted on the north wall of the Modern’s Gallery 6 as part of Ornamental Composition 16. The two-inch wide dark gray stripe is painted inside ruled lines, but moves a bit, as if created by one uninterrupted brushstroke down the height of the wall. There, in these ruled lines that define a space for intention, the hand of the painter is recorded. 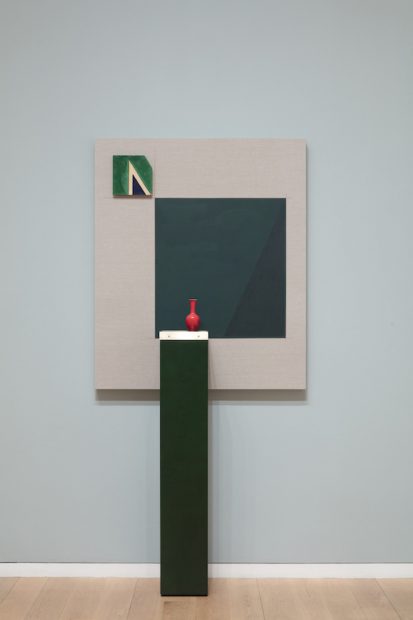 Ornamental Compositions seamlessly blend the space to the point that museum features like the floor fixtures, thermostats, and electrical junction boxes all start to make sense as part of the work. Another striking aspect of the Focus show is how Aram plays with and highlights some of the tradecraft of installing museum exhibitions. For example, the top of the pedestal in Green Movement, just below the bronze square that holds the terrazzo tile, lines up directly with the painted green square on the wall, and in Green Memorial, the linen MDF box lines up precisely with the edge where the two red sections of painted wall and baseboards meet. These details were considered over Aram’s week-long stay in Fort Worth and explicitly acknowledge this particular museum’s architecture. 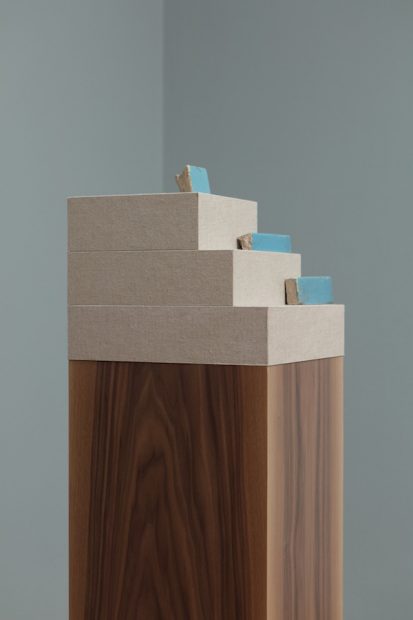 Some works of art recontextualize the world for us, and force us to reconsider our biases and the borderlines between Western art and works form around the world. Aram’s Focus exhibition refutes some common assumptions and pushes back against the kind of Orientalism that has conditioned us to view art from non-western sources as inferior or unsophisticated. In this current show, sculptures, pedestals, walls, and floors have all been integrated into the installation, erasing the lines between the art and architecture, and revealing a poetic quietude and complexity in the ornamental.

Through June 17 at the Modern Art Museum of Fort Worth.