Katherine Bernhardt at the Modern Art Museum of Fort Worth

by Arie Bouman May 22, 2017
FacebookTwitterEmail 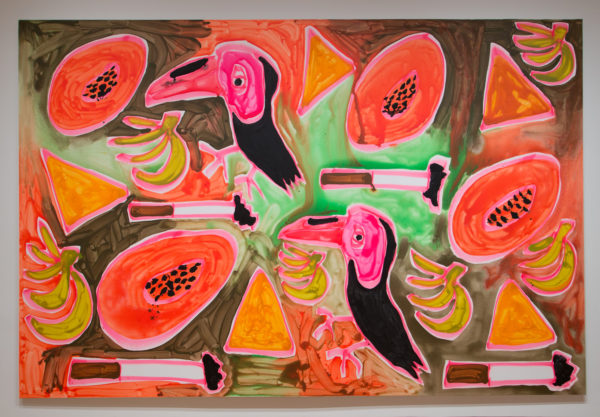 Katherine Bernhardt, Jungle Snack (Orange and Green), 2017
Acrylic and spray paint on canvas. Courtesy of the Modern Art Museum of Fort Worth.

Katherine Bernhardt’s latest series of paintings at the Modern Art Museum of Fort Worth is the current FOCUS show, from the series curated by Alison Hearst. Bernhardt’s pattern paintings are part of her ever-expanding proliferation of drawings and paintings in which she arranges and rearranges an unlikely lineup of everyday objects on the canvas: Toucans, bananas, cigarettes, passion fruit, toothbrushes, toilet rolls, corn chips, socks, batteries. Also, Sharpies, Windex sprays, Pink Panthers, and poop emoticons float across the canvas in an ever-alternating succession of constellations. She sometimes introduces new objects as others fade away from the catalog. According to Bernhardt, the pattern paintings form an incessant inquiry into color and paint. Painted at a feverish pace, it’s as if she is trying to outrun the banality of her subjects, stamping them onto the canvas over and over again until any meaning collapses onto itself.

One of the main inspirations for Bernhardt’s pattern paintings are African wax prints (also known as Dutch wax prints), and these West African fabrics, renowned for their elaborate patterns, often have personal significance pertaining to the wearer’s personality, special occasions or places. Like Bernhardt’s paintings, these prints are often adorned with symbols, objects and popular images in unexpected combinations. For her own work, Bernhardt takes great delight in this interplay, as she combines toucans, cigarettes and toilet rolls in one painting and Mr. Coffees and watermelon wedges in the next. The absurdity resulting from the strange disconnect of meaning and misappropriating of cultural signifiers is also deeply bound up in the strange history of the original reference-point wax prints. Originally conceived as cheap imitations of traditional Indonesian fabrics by Dutch traders, these fabrics incidentally ended up in West Africa, where they have become an essential part of traditional clothing.

“When I was working on the idea of the wax prints I saw some graffiti on union square: an ice cream, a rainbow, a dollar sign and a smiley face. And I thought oh my god that is so good. How can I make that into a painting? How can I steal that.”  – Katherine Bernhardt 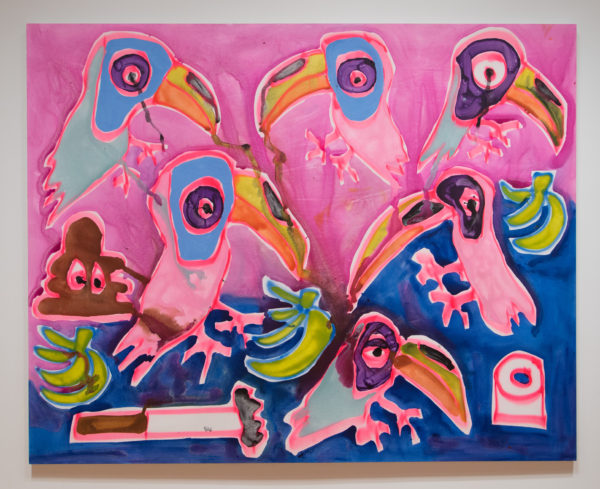 Not only does Bernhardt incorporate graffiti elements into her paintings (especially the spray-paint aesthetic), but she also loads her work with graffiti’s fast and defiant attitude—the sketched outlines made with spray paint and the haste with which she works echoes the illicitness of graffiti. Stripped to their graphic core, the often emblematic objects are instantly legible for what they are, yet the patterns suggest a narrative that’s concealed from us. We know there’s a joke in front of us, but we’re not privy to it. This leaves us with Bernhardt’s sardonic pleasure in our bemusement. As Bernhardt describes in her quote, the toying with and subverting of society’s signifiers can be hilarious as well as powerful, using only banal symbols that we’re often unwittingly consumed by. 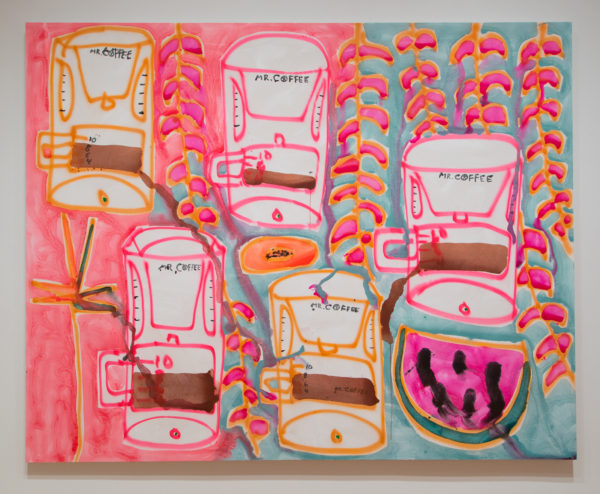 And these are objects for consumption. Not just to consume in a figurative way, but in a very real and visceral sense. Like Willy Wonka’s wallpaper, almost everything you see is edible. From bananas, papayas, watermelon wedges and coffee to Doritos, cigarettes, and toothpaste, most of her objects can be ingested. This oral fixation is also found in the character of the non-edible objects—even the poop emojis, which are defined by their wide smiling mouths. This trick gives her paintings a sensuous directness. There is a physical immediacy—a recognizable part of this visual language—that has become ubiquitous within our culture. The symbols and abstractions, stripped down to their essence, compete for our attention in a way we know all too well. 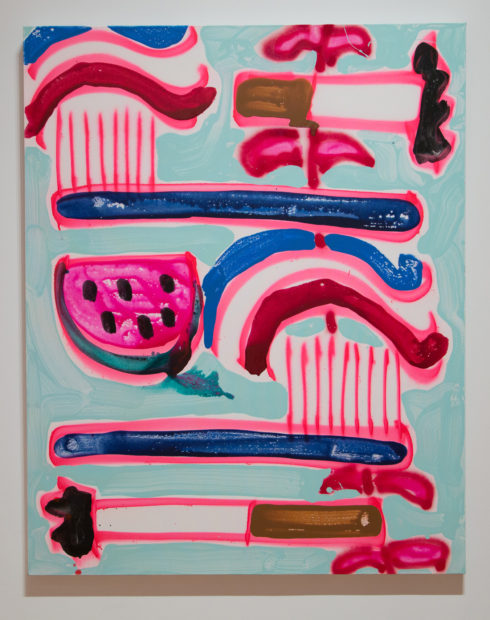 Katherine Bernhardt, Aqua Fresh+ Toothbrushes + Cigarettes+ a Vine, 2017 Acrylic and spray paint on canvas, Courtesy of the Modern Art Museum of Fort Worth. 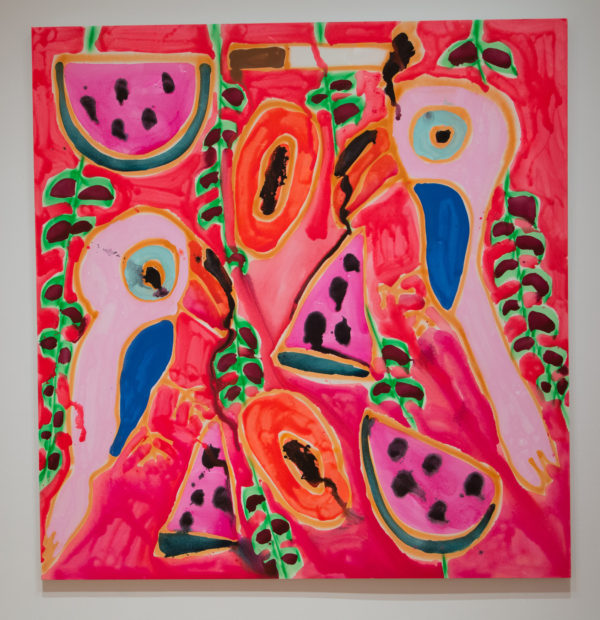 Bernhardt’s paintings are strangely self-contradictory, somehow out of sync with our ideas about ‘fine art’ and ‘painting,’ but not entirely out of step. Bernhardt, through her winking repetition and almost tag-like style, signals like no other painter today (at least painters whose work is found in major museums) that she’s getting away with something. Her non-conformist nihilism contrasts with the domestic world of printed fabrics. She creates inside jokes—hermetically sealed—and she doesn’t do explanations; there are objects, symbols, histories, styles, humor, color, shape and paint brought together on the canvas—so deal with it. And we do, because there’s a joy in it, an endless and refreshing playfulness. This attitude of reveling in art’s mystique is somewhat of an anachronism these days. Traditional painting often collapses under the weight of its own importance, but Bernhardt’s paintings are proudly frivolous. The humor is as much obtuse as it is self-mocking. Yet there’s a strange literacy in her paintings that feels anchored in the present culture—communication through these symbols and emoticons has become a universal language. Bernhardt’s paintings communicate in a very direct way with the viewer, and at some point, we realize it’s due to Bernhardt’s strange and almost indefinable mastery of painting, and her instinctive understanding of what a painting can do.

Through July 9 at the Modern Art Museum of Fort Worth.

Toucans are not everyday objects

Depends on how many Toucans you surround yourself with or how avid a Fruit Loop consumer you are.

I’m angry that I’m spending even this moment to comment…Emperor’s Clothing folks. WHY? Why buy into this? Ugh.