The Modern Art Museum of Fort Worth Grows its Curatorial Team

The Modern Art Museum of Fort Worth has announced changes to its curatorial team, including the promotion of Alison Hearst to Curator, and the appointments of María Elena Ortiz as Curator and Clare Milliken as Assistant Curator. The team will work under the direction of Andrea Karnes, who was named Chief Curator in November 2021. 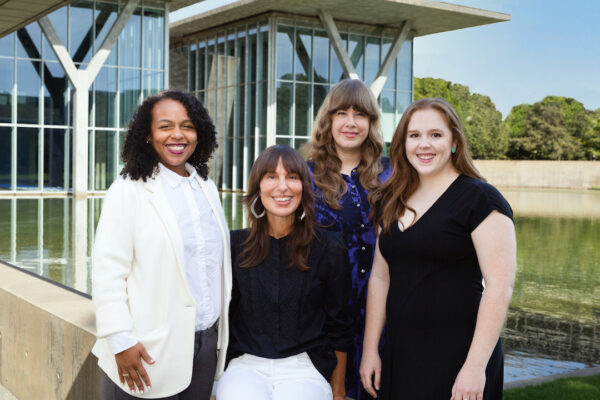 Prior to long-time curator Michael Auping’s retirement in 2017, the Modern’s curatorial team had at one point included four staff members — Mr. Auping as Chief Curator, Ms. Karnes as Senior Curator, Lee Hallman as Associate Curator focused on the permanent collection, and Ms. Hearst as Assistant Curator. Since the departures of Mr. Auping and Ms. Hallman (2021), the team has operated at a reduced size. These recent additions bring the team back to full capacity.

In a press release Ms. Karnes stated, “We are so fortunate to expand and enrich the Modern’s curatorial team with the additions of María Elena Ortiz and Clare Milliken, and the promotion of Alison Hearst. The benefits of new voices and multiple perspectives within our department will reverberate to the community, the art world, and beyond.”

While many museums use either geographic/cultural, media-based, or time-based terms to denote curatorial focuses, such as “Curator of Asian Art” or “Curator of Ancient Art,” it is notable that the Modern’s curatorial team does not have this type of differentiation. Ms. Karnes told Glasstire that this decision is purposeful to allow all members of the team the freedom to bring forth exhibition ideas from any geographic location, using any type of medium, and across any time period that falls within the Modern’s focus (art from the 1940s to the present).

So, while Ms. Hearst has been unofficially focused on emerging artists and Ms. Ortiz, who joins the Modern from the Pérez Art Museum Miami, will draw on her expertise related to artists from Latin America, the Caribbean, and African diasporic communities, their individual interests will not limit the type of exhibitions they will organize. Additionally, Ms. Karnes explained that though Ms. Milliken, who most recently worked as curator of the Green Family Art Foundation, holds the title of Assistant Curator and her work will have a stronger focus on administrative tasks, she will have the space and opportunity to bring her own ideas to the table.

Learn more about the team below via description provided by The Modern.

María Elena Ortiz began her role as Curator at the Modern on August 1. She comes to Fort Worth from the Pérez Art Museum Miami (PAMM), where she was curator and organized several exhibitions, including Allied with Power: African and African Diaspora Art from the Jorge M. Pérez Collection, The Other Side of Now: Foresight in Caribbean Art, Teresita Fernández: Elemental, American Echo Chamber: José Carlos Martinat, william cordova: now’s the time, Beatriz Santiago Muñoz: A Universe of Fragile Mirrors, Ulla von Brandenburg: It Has a Golden Sun and an Elderly Grey Moon, Firelei Báez: Bloodlines, and Carlos Motta: Histories for the Future, among others. Her exhibitions have traveled to prestigious institutions such as the Andy Warhol Museum, Pittsburgh; El Museo de Barrio, New York; and DePaul Art Museum, Chicago.

At PAMM, Ortiz founded and spearheaded the Caribbean Cultural Institute (CCI)—a curatorial platform dedicated to Caribbean art. During her tenure in Miami, she worked to diversify the museum’s collection, securing works by Simone Leigh, Bisa Butler, Bony Ramirez, and others. She developed significant public programs, such as At the Crossroads: Critical Film and Video from the Caribbean and Latinx Art Sessions, along with other symposia related to exhibitions.

Formerly, Ortiz was curator of contemporary arts at the Sala de Arte Público Siqueiros in Mexico City. Along with her catalog contributions, she has contributed to writing platforms such as the Davidoff Art Initiative, Fluent Collaborative, Curating Now, and Terremoto Magazine. In 2014, she was awarded the Colección Patricia Phelps de Cisneros (CPPC) and Independent Curators International (ICI) Travel Award for Central America and the Caribbean, and she received the Emerging Curator Award from the Museum of Latin American Art, Long Beach, California, in 2012.

Curator Alison Hearst is currently organizing I’ll Be Your Mirror: Art and the Digital Screen, a thematic group exhibition surveying more than 50 years of groundbreaking works relating to screen culture. Featuring 51 artists and approximately 60 works, the exhibition will be on view at the Modern beginning February 2023 and will be accompanied by a major publication.

Hearst curated the twenty-year survey Robyn O’Neil: WE, THE MASSES, which opened in fall 2019. She also organized Donald Sultan: The Disaster Paintings, which traveled to the Lowe Art Museum, Miami; Smithsonian American Art Museum, Washington, DC; North Carolina Museum of Art, Raleigh; and Sheldon Museum of Art, Lincoln. Hearst served as assistant curator of the major exhibitions Urban Theater: New York Art in the 1980s and México Inside Out: Themes in Art Since 1990.

In addition to her FOCUS publications, Hearst is the editor and contributing author of I’ll Be Your Mirror: Art and the Digital Screen (forthcoming) and Donald Sultan: The Disaster Paintings, and she was a contributing author to México Inside Out: Themes in Art Since 1990, Urban Theater: New York Art in the 1980s, and Katherine Bernhardt: Swatches.

Clare Milliken joined the Modern as Assistant Curator in March 2022. She has contributed to texts for the upcoming exhibitions Modern Masters: A Tribute to Anne Windfohr Marion and I’ll Be Your Mirror: Art and the Digital Screen. In the future, she looks forward to curating FOCUS exhibitions.

Before coming to the Modern, Milliken was the curator at the Green Family Art Foundation, Dallas. She was instrumental in launching the foundation’s exhibition space in October 2021. Having an in-depth knowledge of the collection, Milliken worked alongside guest curator Aindrea Emelife on the inaugural exhibition, Black Bodies, White Spaces: Invisibility & Hypervisibility. The exhibition—which featured paintings by Amoako Boafo, Jordan Casteel, Deborah Roberts, Amy Sherald, and Henry Taylor– explored how Black artists use the pictorial language of figuration to discuss, critique, and engage with the complexities surrounding Black identity.

Before her departure to join the Modern, Milliken curated Women of Now: Dialogues of Memory, Place & Identity. This group exhibition explored how emerging women artists synthesize a sense of place, memory, and identity to shape a discourse on the contemporary female experience. The exhibition featured artists including Ana Benaroya, Rachel Jones, Hannah Levy, Jenny Morgan, and Anna Park.