Robert Jackson Harrington: “All on the Line” at Dirty Dark Place 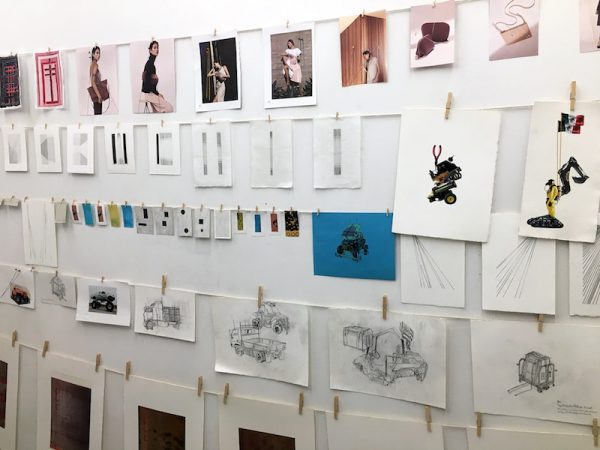 One of the consequences of the gentrification of so-called hip cities is that those warehouse and industrial spaces filled with galleries that made the cities “cool” to begin with are rapidly replaced with mauve mixed-used developments. (I call them the retirement homes of late capitalism). What once was a good, weird gallery attached to a dubiously functioning metal shop is now some screen-saver-like condos, a slow coffee bar and maybe a brewery that specializes in sours and is called something like “Sleeping Owl.” If you want to show art, space is harder and harder to find, especially given that art spaces and galleries (and I say this with absolute authority as someone who is the co-owner of an avant-garde reissue label) are often labors of love and not very lucrative, and the commercial lease rates in a city like Austin are increasingly untenable.

In response to such a predicament, the artist-run gallery Dirty Dark Place had a clever idea: rent a stall in the Kyle Flea Market, a 30-minute drive from Austin. The “flea” is emphasized in the Kyle Flea Market; several of the stall “stores” seem less like a place of business than they do the set for a Harold Pinter play about an old man moving junk around his bunker in the post-apocalypse. As is common in places like these, there are treasures to be found. I pieced together a very decent stereo to play records on for less than $200, and promptly texted Twisted Sam (who has been on the lookout for one): GET DOWN HERE. 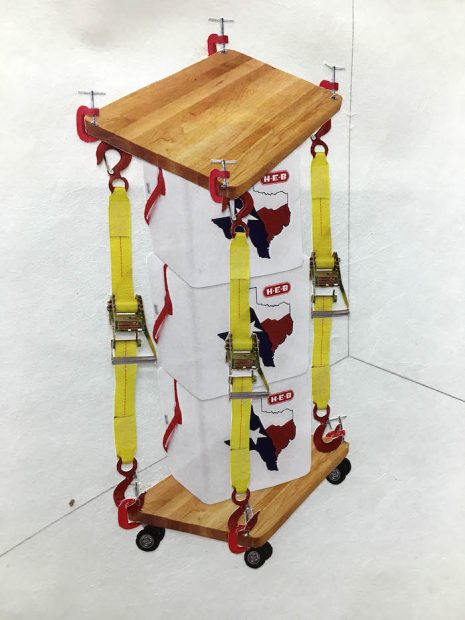 Dirty Dark Place is in the back corner of the market, and fits right in with its ramshackle vibes. An homage to the art gallery renowned critic Dave Hickey had in the sixties in Austin, a Clean, Well-Lighted Place, DDP is unabashedly insouciant. Operating as a press as well, the gallery sells such items as a tote with their logo on one side — the classic “Calvin Pissing,” with lil homie pissing on “Art”— and the absolutely fire Dave Hickey quote on the other: “Good taste is the residue of someone else’s privilege.” For the year-long lease of the stall (roughly all of this year) DDP is running the charmingly named Backdoor Biennial, with a different artist in residence through December 2018. 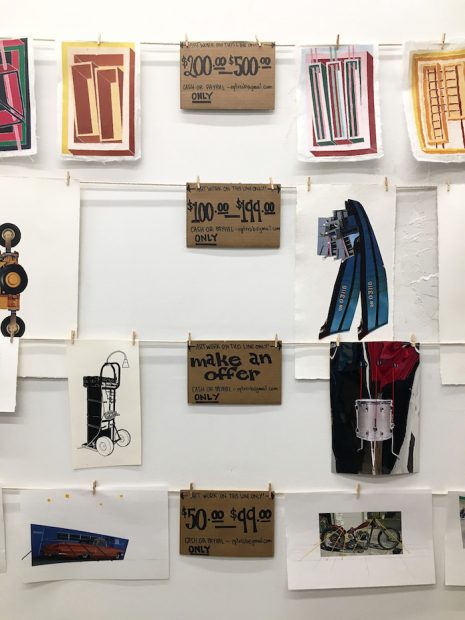 Playing off the intense haggling nature of flea markets , Robert Jackson Harrington’s show of work on paper has a double meaning in its title, All on the Line — he’s putting himself on the line by showing his work, and the pieces are literally hung on clothes lines, with each line having a different price. Throughout the show the pieces will be switched around, rendering their prices arbitrary. One of the things I like about going to flea markets and thrift stores is that unlike a high-end retail shop, where the environment, presentation and sales pitch are designed to convince you the things you’re buying have an intrinsic, immutable value, the former convinces you of the exact opposite: that “value” is fairly meaningless, and the objects you buy for utilitarian, aesthetic, or sentimental reasons are transient, are just passing through your life, and should be treated with the same attachment you had for the backpacker from Australia with blond dreads who crashed on your couch for a couple days using the Couch Surfer app. 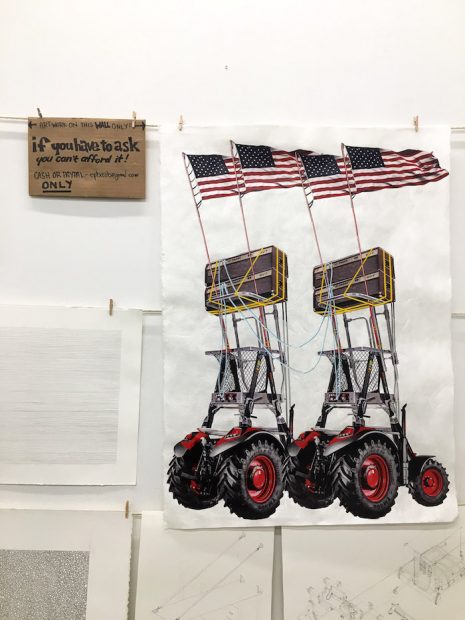 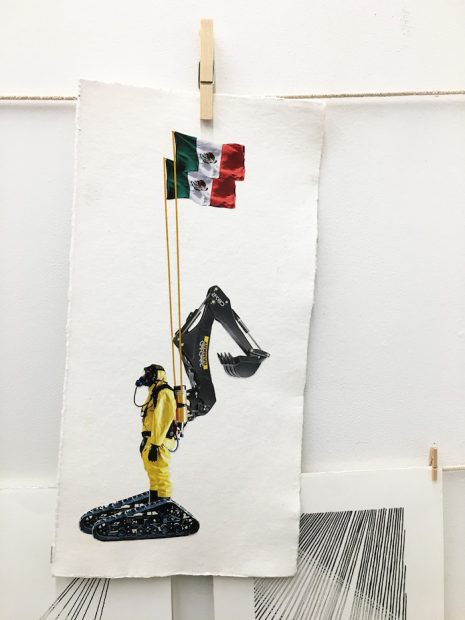 Harrington draws every single day and the range of his works is beguiling. Some of the pieces are imaginative, detailed sketches of badass things like an ATV strapped with Marshall amp stack, looking like storyboards for vehicles in Mad Max: Fury Road. Others are collaged cutouts from fashion and architecture magazines, affixed with patterned lines like straps holding the subjects down. Others are pleasingly pastel geometric designs with a distinct vaporwave aesthetic. The cumulative result is an insight into a Harrington’s perspective, and how he constantly analyzes his surroundings and uses them as the props and scenes of his mind’s fantasia. 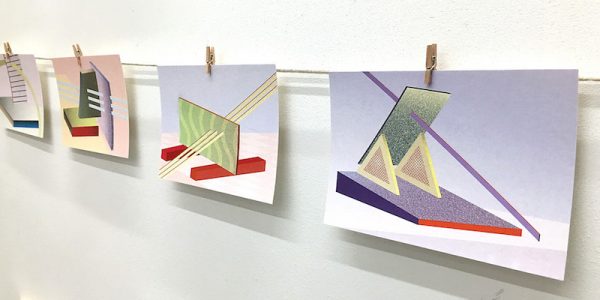 The show reflects the unpretentious, rollicking energy of DDP. The press release is a pitch-perfect send-up to awkwardly worded flyers for various relentless sales: “If you love 2-D artworks for their muscular looks, powerful performance, and rugged capabilities, you should be excited about the month of February.” It’s all a bit daft, this strange little space at the back of a hall filled with Bowie knives and rear projection TVs. But it’s exciting to see the conventions of exhibiting and selling art messed with with such a confident swagger.

I just found out about this from a “Fusebox” festival sheet I may have picked up at Central Market in Austin, but I’m not sure. Maybe I got it at my dentist in Lockhart. Anyway, I live in Kyle about 10 minutes from your location and hope to make some events. I am a poet, prose writer, and mostly bad photographer who retired from teaching creative writing at Texas A&M in 2015. Hopefully my new book, BEING BEAT, will be out from Hercules Press in late April. I hope to make your next event outside the Flea Market. I am ashamed to admit I’ve never been inside the Flea Market though I did inquire if my son could park his rig outside it after closing.