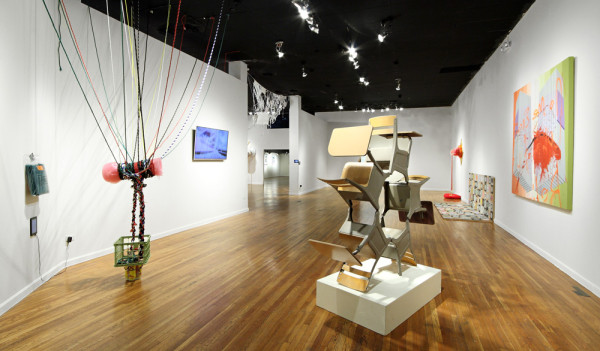 There is something elusive about exhibition-making that, in my view, escapes textbooks, advice manuals, or academic instruction. In the surfeit of publications dedicated to curating that have flooded the market in the last few years, I haven’t found a response to the question “What Makes a Great Exhibition?” asked by the title of Paula Marincola’s now classic volume from 2007.[i] Sure, there are many useful guidelines one can find in these books, but applying them hardly ever results in more than an academically or politically correct show. Yet, there must also be chemistry, curatorial gut, or magic—whatever you may call it. 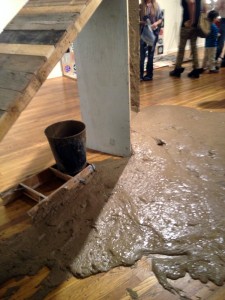 Michael Anthony García, who curated Con/Juntos, the eighteenth iteration of the annual Young Latino Artists’ exhibition for Austin’s Mexic-Arte Museum, was lucky. Con/Juntos is one of these shows that try to do everything right in a challenging institutional framework. But it was a happy accident at the opening that, at least momentarily, took the exhibition beyond being a well-meaning attempt to inject a fresh perspective into an identity-based institution and gave it an unexpected, sharp focus.

I read Con/Juntos through Eureka by Daniel Adame, the repurposed-wood and mud installation that is the end product of a performance that took place at the exhibition’s opening. Houston-based Adame, a self-proclaimed “barefoot sculptor, dancer, and performance artist,” constructed an elongated, column-like box and a slide-like ramp leading to the opening at its top.

Referencing Archimedes in the performance’s title, Adame dunked himself entirely into mud that he had arduously poured into the box, intending to displace it and cause it to overflow. According to the artist, his performance was an attempt to figure out how he can “control, contain, and emit energy.”

But the wooden box yielded to the pressures of mud and flesh, and quite spectacularly burst open. Slush flooded the gallery, producing a stir among the crowded viewers. Though it was promptly mopped up, for a few minutes we were dealing with a loss of authority, both by the artist and the institution, an unexpected and uncontrollable messing with decorum. Similarly, at a first glance Con/Juntos consists mostly of pleasant, polite formalist work, but closer examination reveals psychological friction between workers, and the physical effort of labor as underlying themes.

The show argues that it is collaboration, not primarily ethnic or national affiliation, that is the glue of any community. Aside from featuring examples of the established practice of two Mexican collectives, Tejidos Urbanos and Colectivo Sector Reforma (Javier Cárdenas Tavizon, Santino Escatel, and Alejandro Fournier), García assigned collaborations to all other artists as well, inviting people who work individually to realize collaborative projects for the exhibition.

In addition, the make-up of the show questions the rubric “Latino” by including artists from Latin America: Mexico, Colombia, and Argentina. If I have a complaint about Con/Juntos, it’s the way the artists were teamed up: mostly based on their geographic proximity. Despite the show’s seeming hemispheric inclusiveness, the groupings quietly reinforce the presence of the US-Mexico border that distinguishes “Americans” and “U.S. Latinos” from “Latin Americans.” There is an Austin team of Isabella Bur, April García, and Robert Jackson Harrington and a Dallas team of Sergio García and Ricardo Paniagua. San Antonio-based Raul Gonzalez was paired with Houston-based Daniel Adame. The Argentine, Nelda Ramos, was granted the task of a long-distance collaboration with the Colombian, Javier Vanegas.

Except for the Mexican collectives, each artist is shown twice: collaborative projects are juxtaposed with the artists’ individual works, giving viewers an insight into the dynamics of collaboration. It’s possible to trace how individual preference, choices, and attitudes show (or don’t show) in the collaborative assignments, and to speculate on the levels of equitability, compromise, leadership, and conflict within each team. 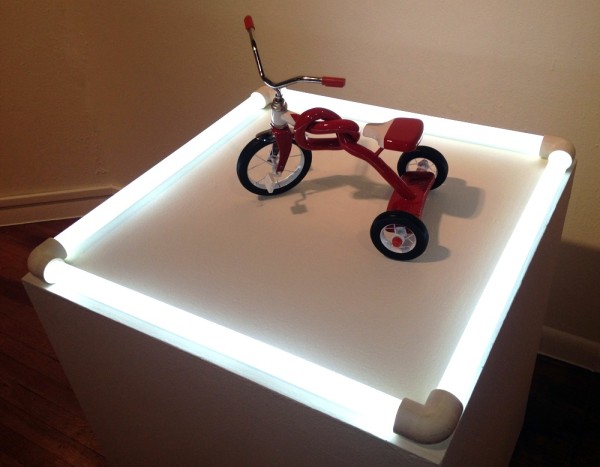 Don’t Get Twisted / Square Light by Sergio García and Ricardo Paniagua is a case of reluctant collaboration. As the slash in the title implies, the work consists of two independent parts, realized individually, with Paniagua responding to a sculpture produced by García. While the knotted tricycle closely follows the lines of García’s found-object sculptures, the fluorescent lights that Paniagua chose to edge the pedestal seem like an inexplicable afterthought. 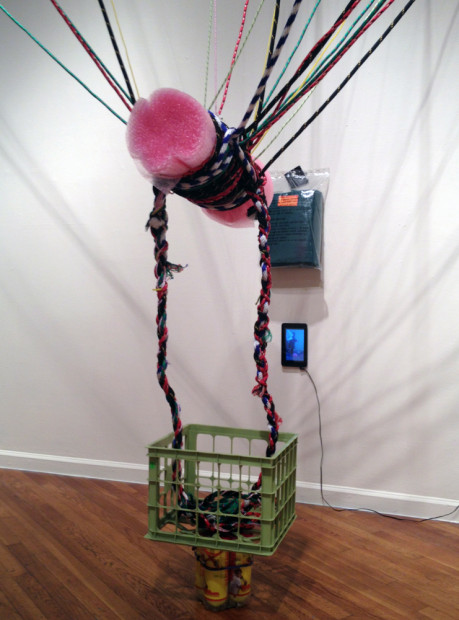 The Austin team of Bur, Jackson Harrington, and April García apparently also had misgivings about the proposed work process, but they made it work. The three produced aggregate outgrowth No. 2 as evidenced by a moving image as if they worked on an assembly line: Bur selected and purchased the materials, Harrington decided what to do with them and provided instructions, and García executed the construction. The loop was completed by Bur filming García at work, sporting one of her soft sculptures on her back. The whole procedure shows that the division of labor is not necessarily a bad idea. Their assemblage appears like some kind of a strange apparatus, perhaps a rescue device, inviting the question on how to use it. 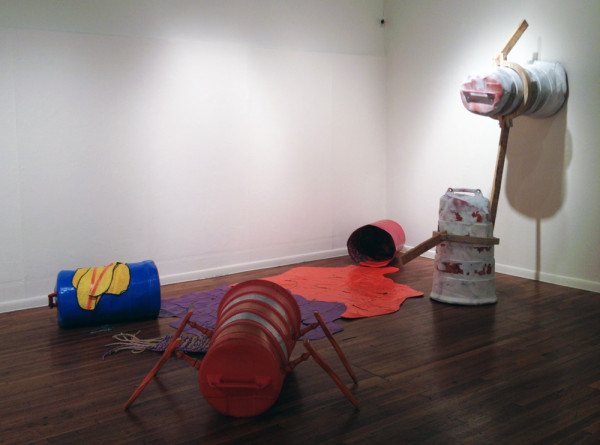 In We Will Become Silhouettes in the Ring of Fire by Raul Gonzalez and Daniel Adame, two artistic personalities seem to mesh together, but somewhat at the expense of Adame’s visceral, bodily approach to art-making. The manipulated construction cones used to demarcate the territory of the piece, which are commonly used by Gonzalez, function as a strong stamp of his practice, especially given the proximity of his individual works. Yet, at the same time they reiterate the theme of work or labor, specifically physical labor, that seems to be the strong preoccupation of quite a few artist in the show: not just Gonzalez himself, but also Sergio García, Adame, and Isabella Bur, whose video features the artist working out with an absurd concrete-filled purse.

The projects presented by the two Mexican collectives pale in comparison with the invited collaborative works. Partially, it is because of their relationship to the exhibition space. Sector Reforma’s video is secluded in a far, darkened corner, while Tejidos Urbanos’ yarn bombing—stretched at the very top of the opening between two sections of the gallery—does little to meaningfully intervene or alter the physical space. More importantly, as programmatically collaborative, finished products, these works are less generously in revealing the process of their conception and making. The potential tensions and frictions involved in their creation remain invisible.

Many thanks to my colleague Rose Salsada, conversing with whom helped to consolidate ideas for this review.