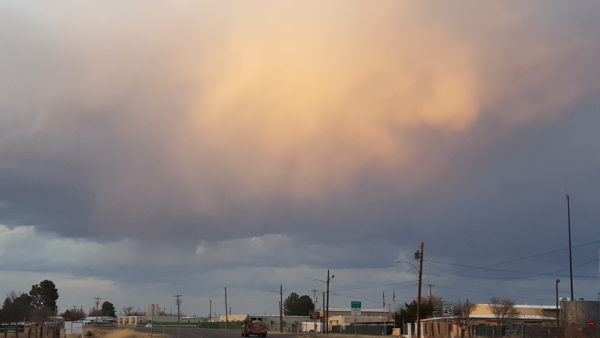 There are so many music festivals now that they could remake Leaving Las Vegas and have Nicolas Cage just party himself to death while festival-hopping with a manic pixie dreamgirl in a halter top and an Indian headdress who never asks him to stop drinking. When I was a kid, it seemed like the only festival was once a year, when Perry Farrell writhed like a moray eel on a 109-degree day sponsored by Fruitopia.

Today, festivals are basically the only way to make money in music. Unless a trailer for a superhero movie uses an extremely slow, nu-metal cover of your song, you will be paid more for playing at 3:15 p.m. on the Vibram stage than if Spotify streamed your album on repeat for the entire duration of the Elon Musk maiden voyage to Mars, as well as the total lifespan of a fledgling human Martian society, including its decline, starvation, extinction, and the time it takes for all traces of its existence to be buried in sand.

In my youth, when hangovers were mostly being really sweaty instead of a Samuel Beckett play starring Richard Burton, I was more open to going to festivals, whereas now most seem like some iteration of hell. ACL is if hell were being the third wheel for a couple trying to relive their glory days but who are actually about to get divorced. Levitation is if hell were going to a festival with Jim Morrison where he parties so hard he invokes God’s wrath in the form of torrential weather. Euphoria is if hell were two people doing coke and talking about their dreams.

But Marfa Myths, presented by the gallery Ballroom Marfa and the label Mexican Summer, stands out. It is exceptionally well-curated (Pharoah Sanders, Lonnie Holley, Jenny Hval, Idris Ackamoor, etc.) and it is located in the scenic, serene surreality of Marfa, Texas (like if the sanatorium in The Magic Mountain was in the hippest, most exclusive borough in Brooklyn and magically transplanted to West Texas). It is the first festival I can remember that I immediately realized I needed to go to. So, my bud Twisted Sam and I hopped into a brand-new, oxblood Impala (much more fun than my flaccid Ford Fiesta, which was in the shop for repairs after being hit by a tornado—for real) and headed out via I-10 for a weekend of transcendent music, provocative art, and the recurring experience of wondering whether you are actually seeing Father John Misty everywhere or whether there are just 35 dudes around you who all look exactly like Father John Misty.

The drive from San Antonio to Marfa is pretty breezy compared to the pilgrimage that a lot of people have to make: six hours, mostly on the Interstate. Because I-10 doesn’t run along the border, there aren’t those militarized checkpoints that run along 90. The further west you go, the harder it becomes to distinguish between law enforcement vehicles and civilian ones; all the trucks and SUVs seem to be equipped with the Minutemen Project package. The gas stations become more austere and shuttered, and I’ve never seen more dubiously “open” roadside restaurants. Then, you drive through a beautiful winding road of rock formations as if entering the set of a film: Marfa. 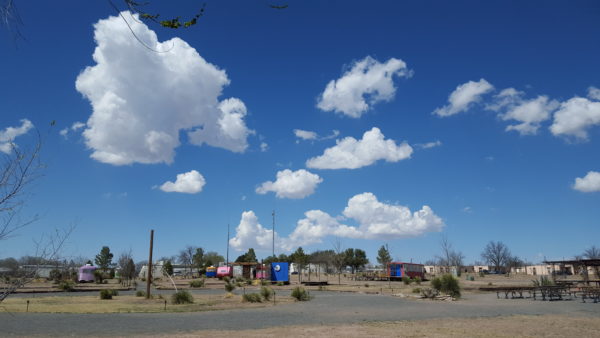 We arrived at El Cosmico, the tasteful RV park with chic restored RVs, teepees, and an open field where dirtbags like me and TS (Twisted Sam) can camp in tents for 30 dollars a day. Thanks to some nice people at Ballroom Marfa, we were invited to the artists’ reception dinner for the opening of Strange Attractor.  These kinds of parties are always a little weird, because the pulse of extreme wealth really chimes at them (as Mark Fisher wrote: “It is easier to imagine the end of the world than the end of capitalism”), but I quickly used my trusted life-hack of “pretending I am in a Robert Altman movie” and had a ball. True to form, we soon found ourselves listening to a leathery, hip cowboy artist genially namedrop (namedrops by art cowboys are among the best; among the worst: namedrops by personal trainers and by people involved in some nascent “paleo-diet” subscription service—often these are in fact the same person). Later on, Luke Fischbeck, of the collective Lucky Dragons, whose piece for Strange Attractor broadcasted the sounds of overlapping tuning forks on one of Marfa’s two radio stations, said to me with perfect Teutonic solemnity: “…our piece is… pure chaos.” Soon, it was time to head over to the visitor center to see the legendary Roky Erickson and his new-ish band The Hounds of Baskerville.

Roky Erickson is one of the martyred saints of the ‘60s, a tremendous talent who was involuntarily committed to a psychiatric hospital for three years (producing his most heartbreaking work, Never Say Goodbye), and like a lot of those psychedelic pranksters, he looks pretty rough now. Resembling Oliver Reed in Gladiator and remaining seated for most of the show, Erickson was subdued, but he played and sang with joy, and the backing band featuring his son had some crackle (at one point, the electric jug man seemed to storm off in a rage only to triumphantly return). The one bummer of the show was the sound guy being so bombed that he momentarily nodded off and messed with the levels on the board, leading to him winning the Too-Turnt Person of the Day award (oh yes, there are winners for each day) and the show having the weakest sound of the weekend (every other performance was aces). 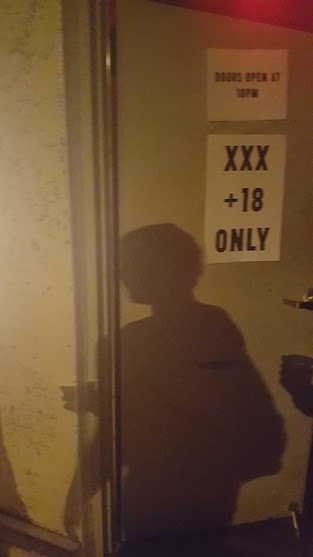 On Friday morning, TS and I began a routine that would last for the duration of the weekend. TS woke up approximately three hours before me, read Thomas Ligotti in a hammock for a while, and then eventually roused me by screaming that it was far, far later than it actually was (see now why he’s called Twisted Sam?). We grabbed coffee then drove to a Mexican restaurant while listening to the Lucky Dragons tuning-fork piece on the radio. Fischbeck was right: it was chaos, but in a creepy, almost rhythmic atmosphere. Sonic narratives would begin to form and dissolve. It gave the wide-skied day the tinge of those mid-‘90s David Lynch movies that are especially nightmarish. It felt as if, upon entering that Mexican restaurant, we might transform into sullen mechanics employed by an infuriated mobster. 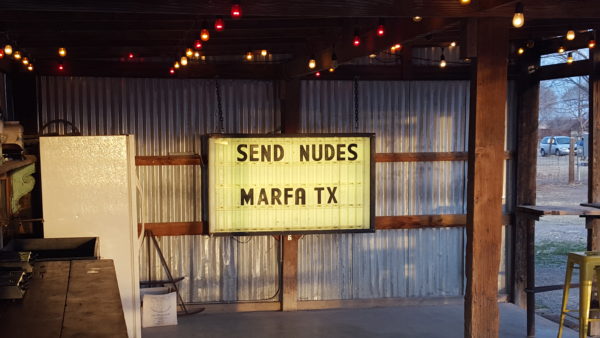 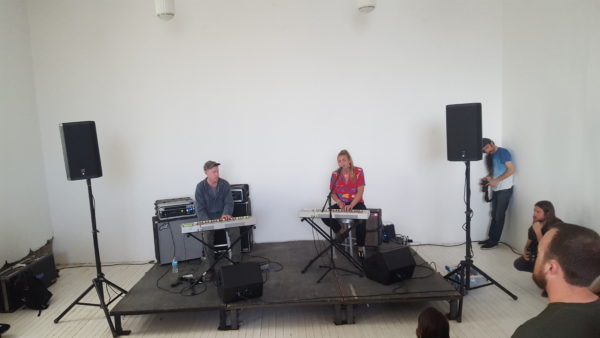 After a heavy meal, we wiled the afternoon away under perfect fluffy clouds (the weather during the day was about as nice as the desert can get) before walking over to the charming gallery space Wrong Marfa for a performance by the duo Zomes. This was a lovely experience that I have far too infrequently: seeing a musician/group I knew nothing about and being floored. Due to my mathematical illiteracy, Zomes sounded like a nonsense word, or maybe the name of an app like Uber but for parasailing. But this duo of just two synthesizers and one voice is simple and profound, sounding like Djong Yun (the singer from Popol Vuh’s Hosianna Mantra album) singing over ‘80s Belgian minimal-wave. I bought some of their albums and I almost never do that. 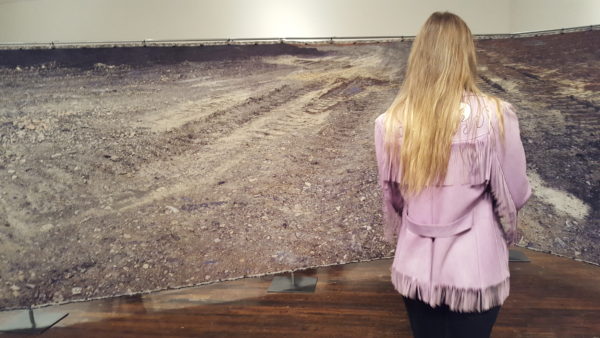 Next, we walked to Ballroom Marfa for the opening of its intense and almost hallucinatory Strange Attractor. Several years in the making, Strange Attractor is an ambitious show that takes its name from (according to the catalog) “the inherent order embedded in chaos, perceivable in harmonious yet unpredictable patterns.” The show is dense and layered and about many things, but in 2017, this close to the border, what struck me most was its articulation of two realities: that of those being detained, imprisoned, and bombed by rich Western countries, and that of those living in the rich countries, in a place ambiently off, like the “zone” in Stalker.  Beatrice Gibson’s piece uses Minecraft imagery and hilarious musings on parkour to create a trippily coherent vision of the malevolent rich morons living thousands of feet above us. Robert Buck’s latticed snakeskin pattern of photographs of a detainment center is eerie and beautiful and deeply sad, and it echoes Lawrence Abu Hamdan’s piece across the hall: a series of Kafkaesque maps chronicling the Byzantine and brutal practice of denying Somali asylum seekers on the basis of some inscrutable accent-recognition software employed by the Swedish government. Douglas Ross’s nearly photographic tapestry depicts a purgatorial expanse of rubble, serving as a counterpoint to Thomas Ashcraft’s cathartic and celestial photographs of upper-atmosphere lightning, which convey a palpable feeling of escape.

Some of the pieces don’t land as well. Phillipa Horan’s larger-than-life sculpture of Charon the ferryman on the river Styx from Greek mythology was grown from mycelium (i.e. mushrooms), and while it’s conceptually impressive, it so strongly reminded me of the cover of the most recent Pink Floyd album The Endless River that when the curator Gryphon Rue was showing me the piece I nearly blurted: “This is a reference to Pink Floyd Endless River, right?” However, I am forgiving of big swings in art, and Strange Attractor is a tour-de-force: unsettling, gorgeous, mysterious, and visceral. 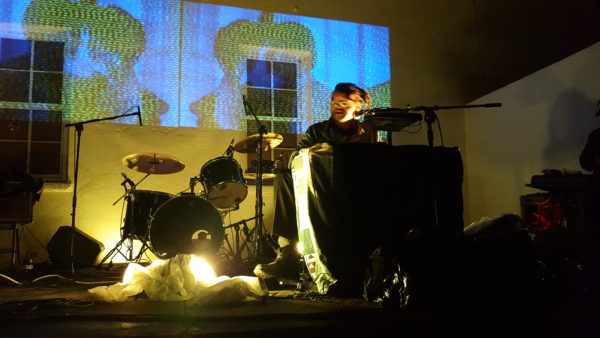 At 7 p.m., the outsider artist and musician Lonnie Holley performed. A man who has lived through immense sadness, Holley plays an electric piano and sings in a gorgeous, sorrowful croon. One line of his repeat still haunts days later: “I escaped from the slave ship to the slave shuttle…. .” 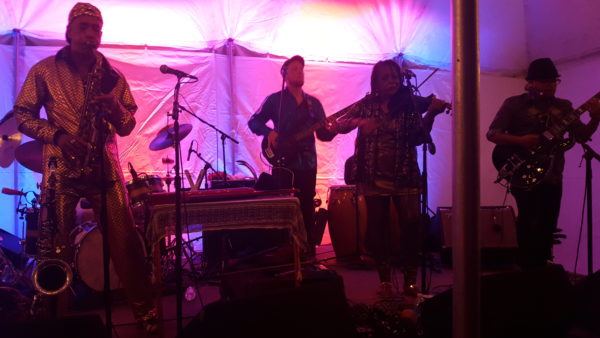 Back at El Cosmico, the storied underground spiritual-jazz band Idris Ackamoor and the Pyramids tore it up in a canvas tent (in a brilliant and European-tinged stroke of programming, a lot of the music was cosmic and improvisational). Ackamoor at 66 looked resplendent in a neon reflective suit; being a free-jazz musician is evidently really good for your body. Later, Austin’s Chulita Vinyl Club spun dance records and it seemed that almost everyone was having a really good time. The Too-Turnt Person of the Day award went to an extremely-faded little bald dude who wandered around relentlessly asking people where he could score coke. I suppose if one of us had correctly guessed his name as “Bumplestiltskin” he would have disappeared in a poof of white powder.