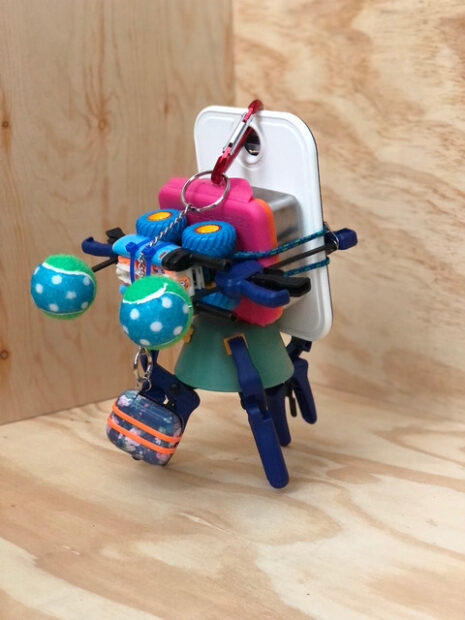 The exhibit’s title, Spring/Summer Season Collection 22, preemptively sets the faux haute atmosphere Harrington creates with his artwork and chosen displays, which mimic staged items in a luxury store. In this exhibition you’re a client of Taller de Harrington; you’re grossly forced into a showroom that literally puts on a pedestal the unnecessary things we own. One way Harrington gently reminders us of the extravagance and glorification we heap on unsustainable items is by his emulating a fashion house’s simple, refined nature through his own studio branding. A serif “H” is repeated in patterns throughout the room; vivid royal blue and lime green blocks of color coat the walls; and on the cover of a green pamphlet is a ferocious and sprawling tiger. The tiger has no discernible relationship to the artwork, other than its satirical representation of Harrington’s valor in championing sustainable art.

The first piece you see upon entering the gallery is comprised of Campbell’s Soup cans adhered to the back of a small plastic red cutting board that’s propped up by two wrenches. A third leg is made from a woodworking clamp that clutches a heavy-duty rubber caster wheel underneath the cans. On the underside of the cutting board hangs a multicolored band-aid box and a keychain. Like the four other sculptures in the show, the piece sits on a display pedestal wrapped in a silver metallic material and blue masking tape, and is held together with green ratchet tie-downs. Harrington also uses faux fur fabric both on and under the pedestal, as a sensuous display for the pieces. 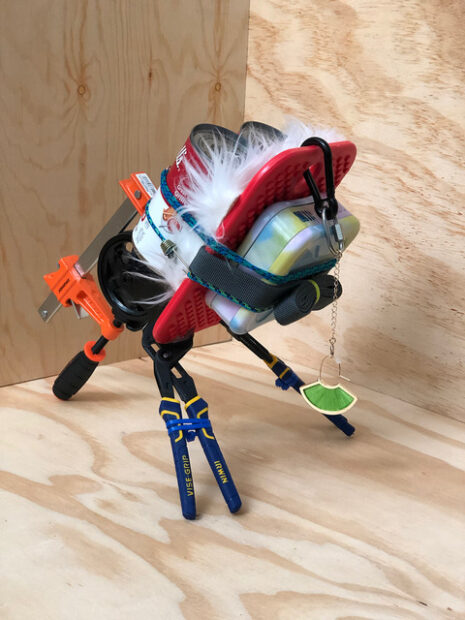 A similar silhouette is created in another sculpture that’s comprised of a toy car, an orange Zippo lighter, carabiners, a bejeweled Airpod case, children’s sippy cups, a grey nylon pouch, and a wooden pencil holder fastened to a white cutting board. As you walk through the exhibit, you realized that Harrington’s sculptures are basically exploded junk drawers, containing even miniature items that’d roll to the drawer’s back, like the odd neon pencil-top erasers that embellish another piece in the show. 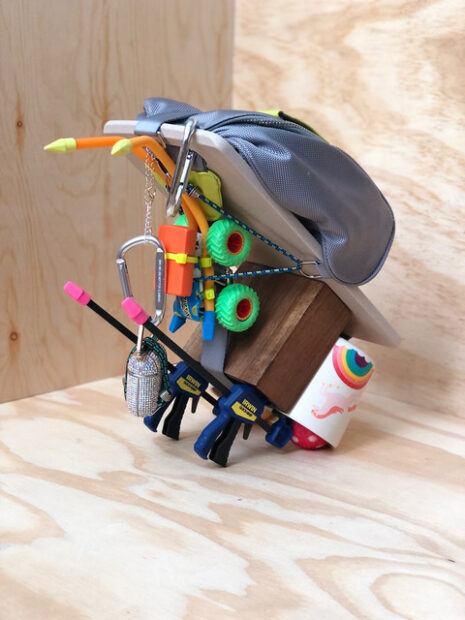 Bic and Zippo lighters are prominently featured in the five bricolage pieces. They coolly adorn the sculptures while subtly alluding to their many uses. Ultimately, the persisting presence of disposable lighters in an exhibition that centers on ideas of sustainability and reuse is telling. But still, the lighters understate their effect on the environment — we can’t see the fuel they hold or the ashes and carbon dioxide they create.

Unlike Harrington’s other works in the exhibition, the form in his first digital print doesn’t have a solid base. Instead, it is suspended between polished exhaust pipes that hold up a white and black speaker, all of which is draped in whimsical bungee cords. Behind and above the speaker is a backdrop of toy cars and ramps. The vibrancy and gleam of the piece focus on the feel-good quality of the scene’s components — amps and speakers give us music, exhaust pipes allude to mobility, and toy cars recall our childhoods. It’s a nostalgic pop-art take on the timeless, simple pleasures of our age. 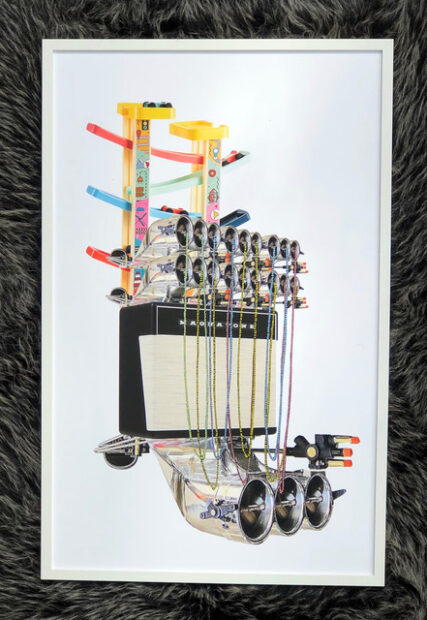 While Harrington’s sculptures are composed of small, generally unmentionable items, his prints combine objects we’ve made necessary. An air compressor, a green oxygen tank, and plastic shopping baskets serve as the bases of some of his structures. In another print, a machine sits atop two stacked amps and a green ladder, with cords draped between the amps. It too shows the satisfaction of a well-oiled machine, offering us its various knob adjustments — options for personalization. 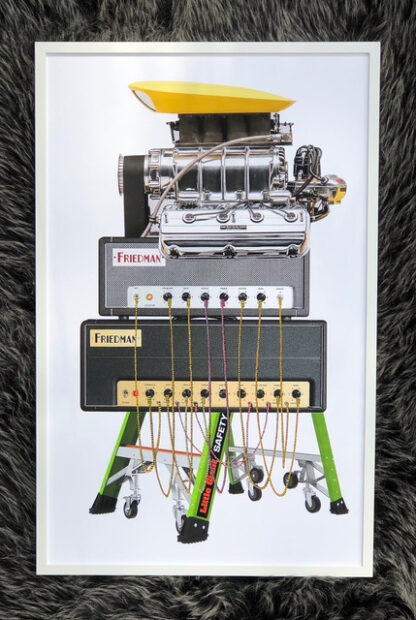 Many of Harrington’s works carry a sense of logic in their aesthetics: his reused objects are convenient, in some capacity, which is why we consume them. And while advertising and corporations tell us the myriad accouterments in his sculptures are essential, they are also environmentally harmful.

Harrington’s show tells the story and shows us the detritus of the unreasonable consumption of unsustainable everyday objects. His metal and plastic masses, which are bungee corded and zip-tied together, are unnatural and cheap. The ambition of Harrington’s show to galvanize sustainability may be lost on some who merely recognize a beloved keychain or spearmint tin, but through his work he has begun to tell the story of society’s campy, unreasonably fabricated existence.

I’ve seen this show. It’s good. Like REALLY good. You should go see it too.