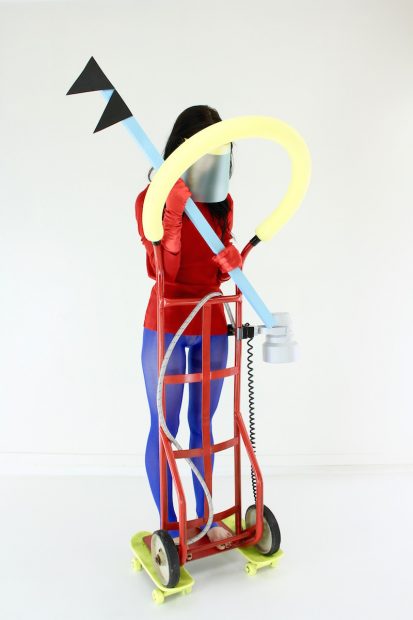 There is a ceaseless, almost hungry quality to the creativity of Robert Jackson Harrington. He paints or draws every single day, runs the Museum of Pocket Art (wearing tailored trousers with multiple pockets, the roving exhibition is literally on his person) and transforms the myriad, fungible items of the global supply chain into elegantly mysterious and humorous sculptures coiled with some ineffable possibility.

Useless Systems, a collaboration between Harrington and mixed-media artist Hector Hernandez on view at Presa House in San Antonio, is comprised of colorful and kinetic sculptures made from recycling bins, umbrellas, vices, luggage, brooms, and other everyday objects that fill big box stores everywhere. Harrington writes:

“In my work I try to establish false narratives through machine-like assemblage that makes the viewer contemplate the potential of my work. That process for me is far more exciting than any function I can actually make my work do, so for me the art resides in the viewers imagination.” 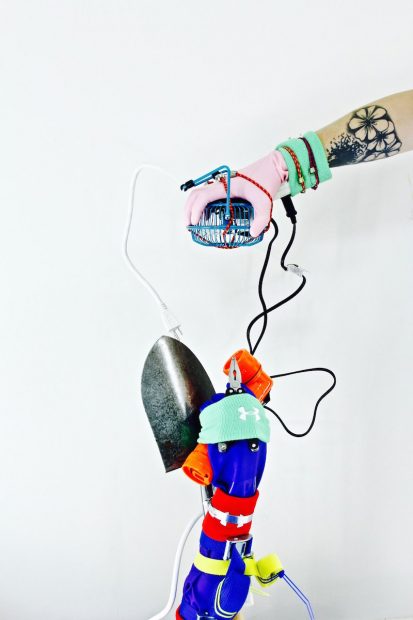 The works slyly exploit the familiarity of the objects. All the items in the works individually make rote and banal sense; they are immediately understandable in their totality — a broom is a broom, a fan is a fan. Assembled together, these items are stripped of their rationality and function, and their aesthetic and tactility is foregrounded, but the charge of function remains as a shadow. These pieces are beautiful, colorful, dynamic sculptures that activate a lingering disquiet that they should… do something. This leads to a kind of sublime minor key rumination — what should art do? What does all this shit we buy and fill our lives with actually do?

The kineticism and potentiality of the pieces are heightened by Hernandez’s elusive, faceless figures, which seem to demonstrate the sculptures like sales models. Hernandez writes: “What I am trying to do with my new work is to capture that one second in time when everything is perfect: the power of the body, the energy going through the fabric and the balance of light.” 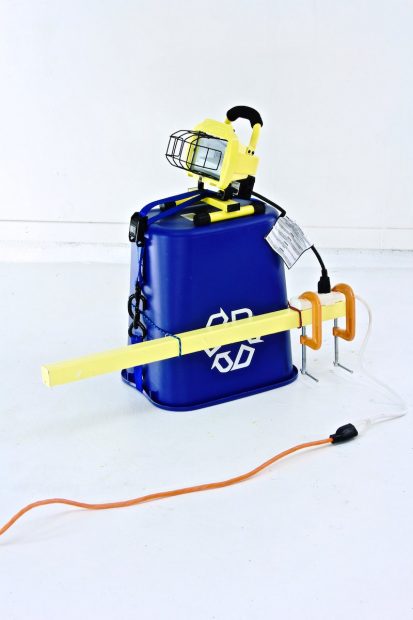 The show attains an alien energy that feels invigorating, and even utopian, because of the way it elevates its components. When done well, the use of everyday materials and detritus in art presents an almost mystical transformation. Louise Nevelson wrote that her practice of reclaiming and scavenging scrap wood was a form of resurrection. Harrington and Hernandez resurrect a futurism from drudgery. The title, Useless Systems, initially seems to reference the works themselves — after all, like all art they aren’t strictly useful. But the show’s dazzling recombinations create a purposefully irrational tautology: useful systems are useless; useless systems are useful.

There will be an artists’ talk at Presa House, San Antonio on Saturday, Oct. 26 at 7 pm. The exhibition is on view through October 26.