One of the joys of living in Texas is that the state’s mythology and presence looms so large that it often inspires visiting artists to make works specifically tailored and in response to the Lone Star State. A couple of weeks ago I saw comedian-musician Tim Heidecker perform at the Paramount in Austin, and one section of the show was an incredibly funny and savage evisceration of the ACL storyteller-troubadour aesthetic that Austin prides itself on. Dressed in a keffiyeh and beret, Heidecker would croak before each song: “We’re gonna do it a little differently tonight,” and launch into a deliriously indulgent acoustic solo, making awful faces and beating on the body of his guitar. It was the funniest thing I’ve seen all year —  a special gift for the Texas crowd.

North Carolina-based artists Sabine Gruffat and Bill Brown just finished a mini-tour of Texas (organized by Austin’s gallery/collective Dirty Dark Place) at Sala Diaz in San Antonio, screening several of their films and performing Unsettling Texas, a two-channel 16mm live performance. Gruffat and Brown manipulate etched film and found footage from vintage cowboy movies and documentaries to craft a hypnotic and… well, unsettling meditation on borders and manifest destiny. In one clip from one of those Technicolor epics of the ’50s and ’60s, a mutton-chopped man brays about Texas joining the Union; in another clip a rodeo rider plays in reverse and upside down; in another a six-fingered cowboy (hat tip to Hills Snyder for pointing this out to me) yodels in a loop, until it flattens out into an almost minimal drone. The found-footage clips dance and flicker with Gruffat and Brown’s live manipulation of the colorful, psychedelic laser-etched film, creating something ritualized and totemic. The symbols of the west, created as part of the phalanx for the white dream of conquest — from sea to shining sea — repeat themselves until they are etched (as if by laser) onto the land. This is, after all, what borders are. 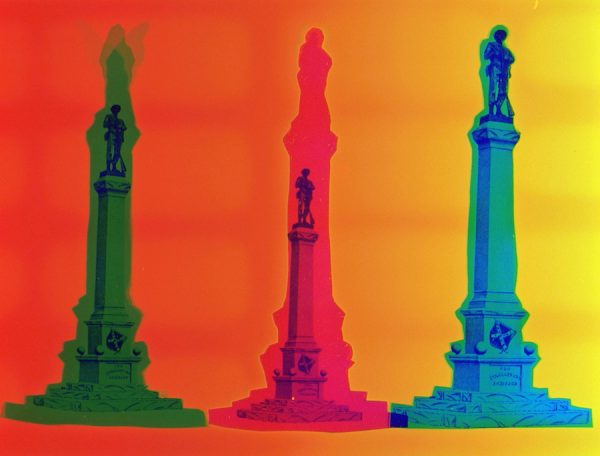 Still from Take It Down

Gruffat and Brown’s Take It Down documents the protests and counter-protests over the removal of the ‘Silent Sam’ statue on the University of North Carolina campus. Like many confederate statues, Silent Sam was erected long after the end of the Civil War, and made of cheap composite metals (as opposed to bronze). In a fun bit of irony, the chintzy nature of these statues has made them easy to literally yank down. The purpose of these statues was to materialize the myth of the lost cause, which completely de-emphasized slavery and instead cast the Confederacy and its soldiers as impossibly brave patriots answering their states’ calls. Take it Down captures one pro-statue protestor vaguely intoning the importance of the statues through words like ‘courage,’ ‘history,’ and ‘loyalty.’ This is juxtaposed with another pro-statue man shrieking about how the KKK did good things. The contrast is immediately understandable: both men have a keening tension in their voices, a white-knuckled tenor, as the statue, like Atlas, holds up their whole world. One of them just happens to say the quiet part out loud. The film is exposed in bleeding, neon contrasts — a “heat vision” exposing the roiling rage beneath the surface, the fever that’s never really gone away. 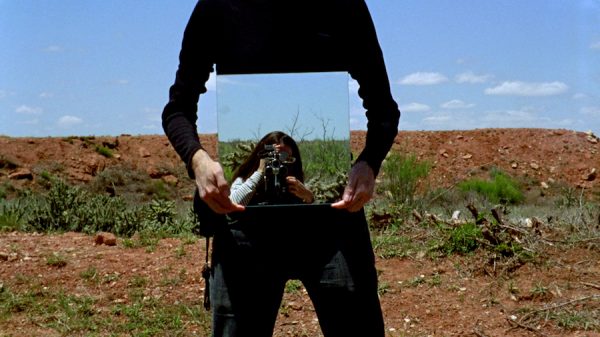 The last film they screened, Amarillo Ramp, concerns Robert Smithson’s land-art piece in Amarillo and provided a welcomed salvo, away from the politics of empire and white supremacy. The film documents the semi-spiral of dirt and its battle (or harmony, depending on your perspective) with the elements. Smithson was interested in entropy — how decay begins immediately with everything upon completion. But there is a serenity to the work, Smithson’s last, and the way it ebbs and flows into the landscape depending on the upkeep. Smithson’s land pieces articulate a primal, ancient world — one with different geography and different borders. As J.G. Ballard wrote about the Ramp: “The Amarillo Ramp I take to be both jetty and runway, a proto-labyrinth that Smithson hoped would launch him from the cramping limits of time and space into a richer and more complex realm.”