You can’t get to Amarillo Ramp if it has rained recently. Three West Texas A&M University students and I could have gotten out to the Ramp for the second maintenance trip of 2014, on September 21st, but it would have rained while were there, stranding us, and that would have really sucked. Weather complicated a Mario Garcia Torres film shoot at the Ramp; it interrupted a MOMA curator’s recent trip. West Texas weather is the crazy doorman to Amarillo Ramp, and no one is on the list. 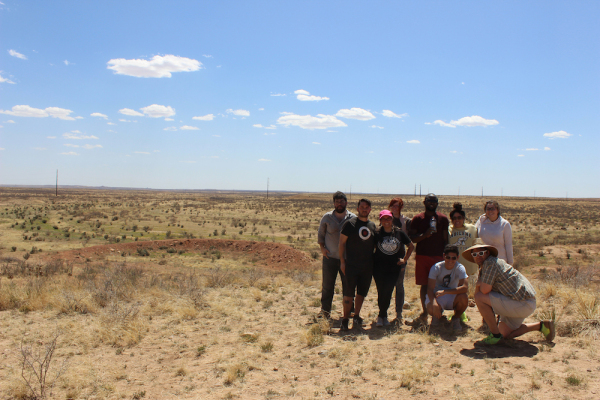 Remoteness and dubious accessibility emphasize Amarillo Ramp. Robert Smithson died in a plane crash while surveying the site just over 40 years ago, and though he chose a specific site for his final earthwork, but he did not choose for it to be his last. The work has often been associated with that tragedy. It was completed posthumously by Nancy Holt, Richard Serra, and Tony Shafrazi the month after the crash, but Amarillo Ramp is not about death. It is more about one of life’s other constants: entropy.

Smithson refers to “fluvial entropy,” akin to erosion, in a 1973 interview and from this many people infer his earthworks should be allowed to return to the earth, but this is a mistake. For Smithson, entropy is a guideline rather than a rule, and its effect on his earthworks can be reset through restoration. Nancy Holt convinced me that, ideally, the Ramp should be restored, and that is part of the reason I have been cutting mesquite off the sculpture for almost 20 years. 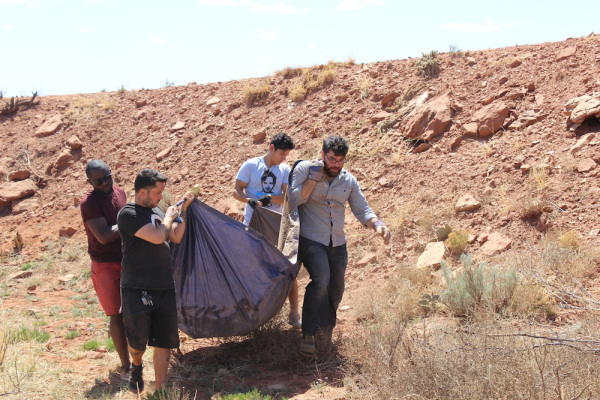 The other reason is that Amarillo Ramp was my artistic genesis. Two decades ago, when I first went to the site, I knew nothing about contemporary art. After my first visit, I immediately enrolled in art school and became fully entrenched in contemporary art theory. Now, I’m an assistant professor at the local university, and use the Ramp experience to help put my students on the same path. Passing off the circular pile of dirt as a monumental work of art is a hard sell, but I see students change during their time out there. None of the plants in Tecovas Canyon are user-friendly. The heat and the wind aren’t selling points either. An Amarillo Ramp maintenance trip is hard and dirty, often painful. At the least they all leave knowing that art is not easy. I am proud of the students who have completed it.

Why do they do it? It may be the extra credit, the chance at scholarship, or a line on the resume, but I choose to believe that my frequent mythologization of the strange sculpture out in the Canadian River breaks convinces them that Amarillo Ramp deserves to be preserved. The Ramp turned 40 last year, and it is showing its age. The Power Station in Dallas organized Amarillo Entropy, a show and an auction that raised money for the restoration of the Amarillo Ramp. The BIG ART fund was created at West Texas A&M University to provide for these bi-annual student maintenance trips. We have done three trips so far, one in Fall 2013, one last March and the most recent one last month.

The March trip was the most populated. Ten people went out to find the center of the Ramp, so that we could begin the reconstruction of its “tail,” a primary concern of Nancy Holt’s. The lower portion of the sculpture was almost completely gone. We were able to use geometry to reestablish the tail and laid out two rock trails to mark the edges. We also cut brush, most of which is cholla and mesquite. Cholla is a cactus that has be completely removed because if one section of the plant falls to the ground it turns into a new plant, and it’s covered with spines that go through everything. Mesquite is a tree for which I have a special kind of hate. Sure it cooks an awesome steak, but it, too, is covered in spines made from wood hard enough to destroy a chain saw. It’s also incredibly persistent: when I say I have been cutting down mesquite for 20 years, I mean literally cutting down the same trees for 20 years. The only way to truly get rid of this horrible horticulture from hell is to poison it. 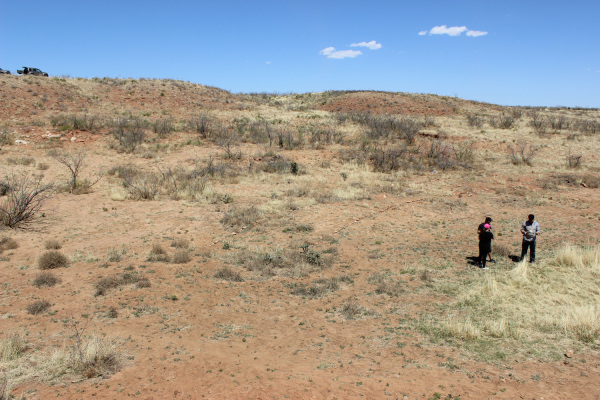 “the Tail” laid out in rocks

Before she passed last year, Nancy Holt made it clear that she would like the Ramp restored, but making it a reality is a long slow road. When we finally headed out this fall, there were only four of us. The primary goal was to “clean up the lines” of the Ramp. The Texas Panhandle had a very wet summer, and the plant life had exploded. All of the tall growth around the Ramp made it look shorter. Russian thistle, a.k.a. tumbleweed, had laid siege to the head of the sculpture. We managed to remove the offending plant life from the Ramp, and cleared the brush in the recently defined tail. We also did away with cacti and new-grown mesquite but, as always, they will be back. 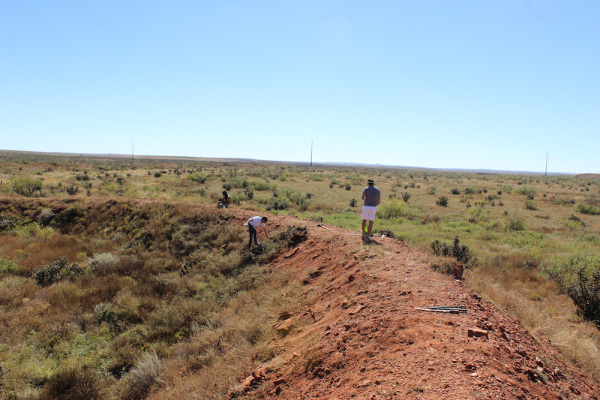 It was hot that day in October, but not bad for Texas. Most of the bugs were gone. There was a light breeze. It was as pleasant as hard labor can be. The surrounding landscape began to show its beauty. Standing out there watching the subtle shifts of scenery, Amarillo Ramp starts to work. Essentially, it provides an objective viewpoint for its environment. Over the last 20 years, I have seen the Ramp in every kind of weather and time of day, and witness the slow creep of human development. Amarillo Ramp is an exceptional gauge of time. The form of the Ramp is a fragment of a vertical spiral, like the geological time spiral, of which humans are a minuscule part. We document our maintenance trips, giving us a visual record the Ramp’s evolution. The documentation of changes to the earthwork over time allows us to comprehend time on a grander scale. The continual interaction with the Ramp allows my student to glimpse a bigger picture of our universe. This educational benefit alone demands preservation.

Amarillo Ramp is a monument to time’s unstoppable march, but it is not immune to it. West Texas is a harsh environment, in terms of weather and of culture. Forty years of sun and wind have not treated the Ramp well. Recent events surrounding the Ramp have created an air of change as well. Its remoteness does enhance its impact; it also instills a sense of impermanence. The roads to it may wash out. The handful of people who know its location may lose interest. Heck, a tornado may suck it up. We can’t stop that, but our maintenance trips prevent the others, and assure continual access to a masterwork of contemporary art. While there is uncertainty for the future of the Amarillo Ramp, we’re working hard to make sure it has one. 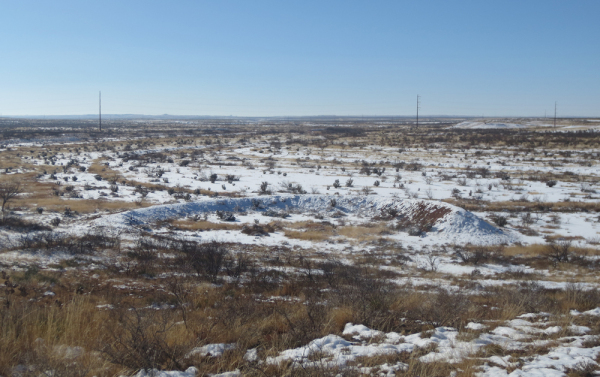 This is an Awesome Article by a true Smithsonian.

So glad to hear that this sculpture is being restored. I saw some very sad photos of it a few years ago. Let me know if you need more volunteers for field work.

It would be a blast to work on restoration!

Smithson actually wrote extensively on the importance or the entropic nature of his earthworks. If one were to be interested in restoring the piece, without violating the principal of entropy, they should work on refilling Tecovas lake. This is of course the body of water that originally played host to the sculpture. That… that would be an appropriate restoration.

Myself and two others were the first ones to have the honors of restoration endeavors. I remember being in Jon’s office when Nancy Holt called us in 2013 to give her blessings.