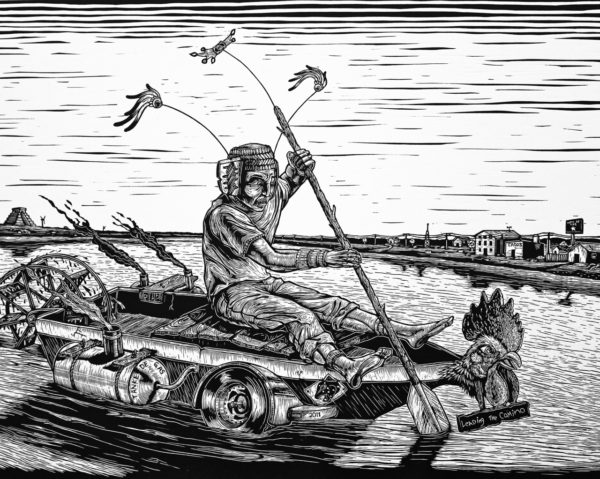 There’s a show of Juan de Dios Mora’s astonishing prints at the McNay right now, and I can’t recommend it enough. San Antonio art people may be well aware of Mora’s work and presence in their scene (he received his MFA from the University of Texas at San Antonio and teaches printmaking there now), but this is the first time I’ve seen a whole collection of his linocut prints in one space, and the effect is like walking into a tight, hot political pressure cooker, but with a safety valve of humor. Mora is extending the traditions, tonally, of the best political cartoons and even mural work of Mexico’s greats, though the revolution he’s revving up for is the new one — the one that’s happening now and also just around the corner, time-wise, and taking place at our border.

Mora’s deftness with this medium can’t be fully grasped in reproduction here. The work is so nimble, textured, and detailed that it ripples across the page like water. Or cut glass. That Mora pairs this visual lusciousness with such trenchant subject matter is of course the thing that elevates the work from good to great. 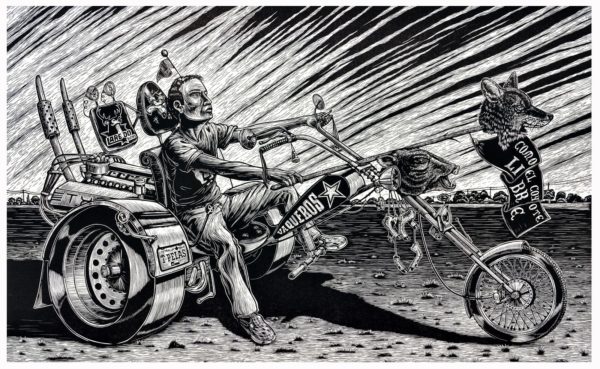 Once you get sucked into gazing at the works’ surfaces, you start to spend time with his characters, who are all going somewhere, and you want to follow. One of Mora’s primary themes is that of journey or escape — many of his protagonists are at the wheel or helm of some sort of imaginatively chopped and rigged jalopy, and are either leisurely cruising their landscape, or urgently straining toward some new reality. The ones taking their time seem to have resigned themselves to being alphas in an arid, almost Mars-like borderland purgatory created by our political climate and inevitable culture shifts. The ones pushing through the atmosphere toward the heavens are gambling with life and death itself. 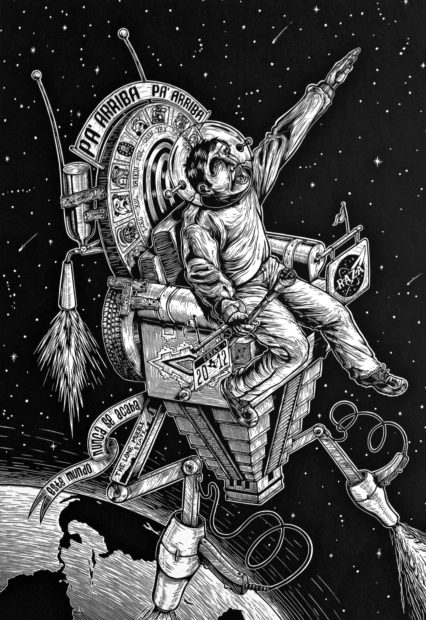 At both ends, these characters are displaying a willfulness and resourcefulness that comes with being a person straddling two worlds. Mora layers these dichotomies: “Two worlds” can mean Mexico and the US, or the traditions of our parents and grandparents giving way to a new generation, or the sacred versus the profane, or the ancient and the modern, or the rural versus the cities, or the trials and despair of the here and now versus the terror and rewards of what happens next. 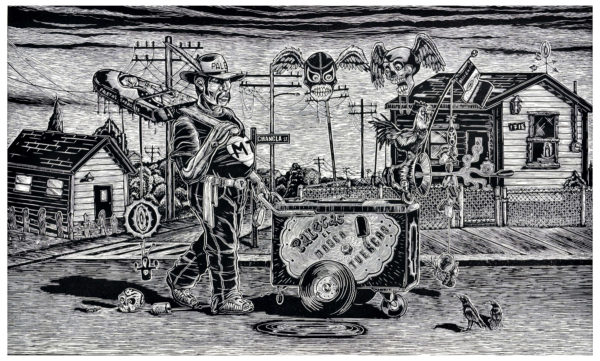 He loads up his images with recognizable symbols of religion, mythology, pop and street culture, and signage, and these generously ground the viewer as we meet up with his travelers and feel the limits and potentials of their various trajectories. And here, across his still-young career, we can see that Mora’s vision of stasis is evolving, too, just like his characters and their circumstances, and just like our political moment.

Through August 13, 2017 at the McNay Art Museum, San Antonio