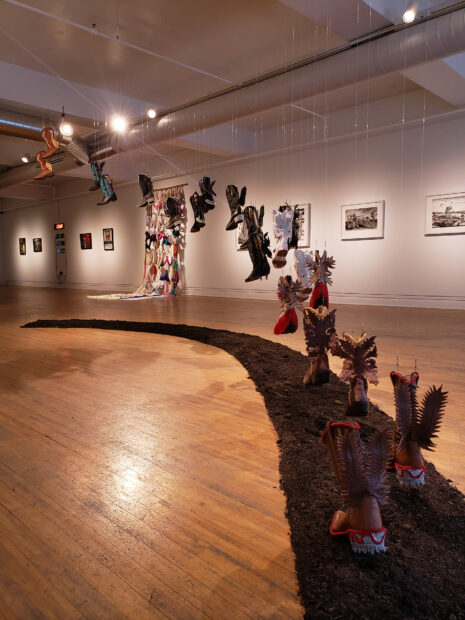 Edges come in two forms, as borders or as boundaries… In natural ecologies, borders are the zones in a habitat where organisms become more interactive, due to the meeting of different species or physical conditions. The boundary is a limit, a territory beyond which a particular species does not stray.

A note from the writer:

Due to the loaded content and personal nature of this exhibition, I felt the need to draw on many sources to properly engage in dialogue with its subject matter. Alongside articles and reports, I evoked the words of some of my most beloved thinkers: Gloria Anzaldua and Richard Sennett.

The Queer, Chicana poet, writer, and feminist theorist and sociologist/urban planner both have much to say about borders: how they function on our bodies and psyche’s personally and collectively, in time and space. I have included two portions of text from the first pages of Anzaldua’s Borderlands/La Frontera: The New Mestiza (1983) and a short essay by Richard Sennett called “Boundaries and Borders” (2003) in order to weave the exhibition, its works, and my own thoughts into a line of thinking on the subject of borders, borderlands, their contradictions and possibilities.

dividing a pueblo, a culture,

running down the length of my body,

staking fence rods in my flesh,

This is my home

The Border is a Weapon, curated by artist and educator Gil Rocha and currently on view until April 10 at 937 Liberty Gallery, in Pittsburgh, PA, offers a poetic glance into the concerns, grievances, fears, and exhaustion prevalent in the work of five artists and one collective who have roots or projects centered in/on the psychogeography of the U.S./Mexico border. All of the individual artists (along with the curator) were born or educated in South Texas (like myself), a site of personal and ancestral history, ripe with potential for a kind of collective liberation if explored, but mostly tainted by the present-day articulation of oppressive colonial systems and their overt/covert signifiers. In any case, the choice to exhibit works by Tejano/Mexicano/Latinx/o/a artists about the Texas/Mexico border at the western edge of Pennsylvania may feel out of place, but we must remember that the U.S.’s Immigration and Customs Enforcement agency (ICE) has more than 200 detention centers across the country. One of these is in Berks, PA, 250 miles away from Pittsburgh and 70 miles away from Philadelphia (where I live). The “border” does not stop at the banks of the Rio Grande or at the endless miles of contracted fencing, but extends throughout the country, through a network of offices, detention centers (they are prisons), and other bureaucracies.

This network, and the laws that give it legitimacy, define the boundary of liberty for many of those who wish to enter the U.S. Although this boundary is spatially amorphous, its material, experiential consequences are harsh and real for immigrants beholden to its violence (indefinite detention, chronic abuse) and motives. This border is designed to be a dead-end, a deterrent to all future travelers, a sentiment echoed by the ever more aggressive state policies by Texas Governor-in-Troll, Greg Abbot, and the words of our current Vice President: “Do not come.”

…to the ethologist, a borderland is full of time. By contrast, the boundary is a static space in time, because there is less exchange – it is marked by things petering out, not happening. … the dead edge.

Now that I’ve established some context, I can speak about the exhibition. 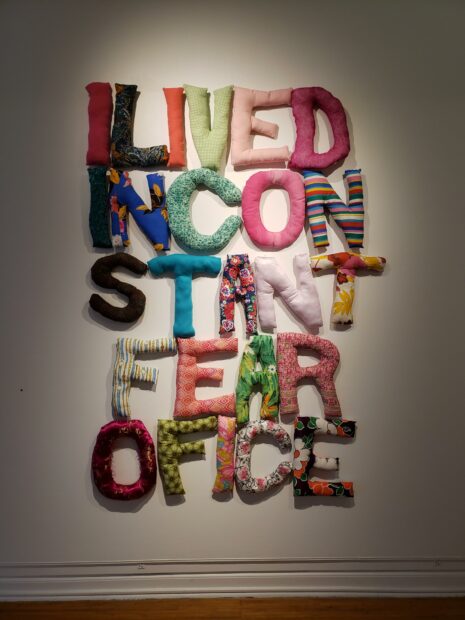 Daniela Cavasos Madrigal, “I Lived in Constant Fear of Ice”

The Border is a Weapon is located in a long, sprawling, second-floor space of an old building in downtown Pittsburgh. Upon entering, I was moved through a series of objects and installations representing struggle, anxiety, grief, and frustration, all attempting to find a statement in the murky atmosphere of “The Border.” Flanking the entranceway are Daniela Cavasos Madrigal’s fabric/text works Maria (2019) and Lo Que Cargamos (2017), which speak of the burden of travel, migration and capture by incorporating repurposed garments. In the two works the narrator shifts from an anonymous point of view (“I LIVED IN CONSTANT FEAR OF ICE”) to the more ethereal and dissociated statement “THE THINGS THEY CARRIED,” which is rendered in soft text sewn into a denim jacket. It leaves one with the desire to see the THINGS, or to hear more about them. Is this absence intended? At the end of the journey, is there anything left? 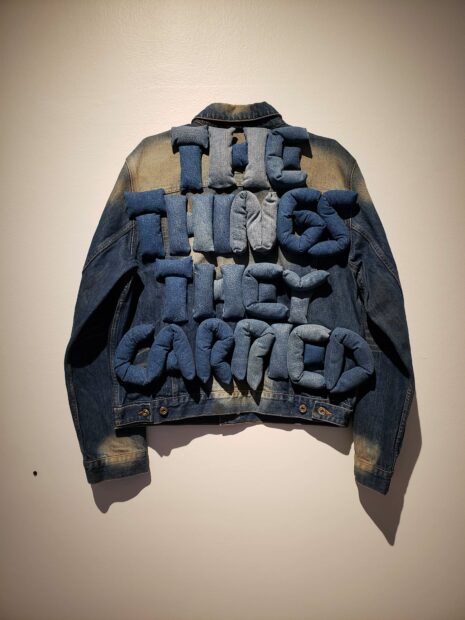 Madrigal’s work opens up to installations by Angel Cabrales and Jose Villalobos. Cabrales shows Dream a Little Dream (2018), a melancholic, ironic arrangement of a child-size ICE van (the kind that would appear in front of a grocery store), equipped with flashing red and blue lights amongst a surreal DIY landscape of illuminated cacti and undulating patterns of pink and blue sand. The piece is evocative, yet not as effective as his more visually concentrated Tememos en Porporcian a Nuestra Ignorancia / We Fear in proportion to our ignorance (2021). The pińata in this work, constructed of a metal cage, bleeds neon, reliquaries, and rosaries; it is one of the few empathetic objects in the exhibition. It is both a literal and figurative sign of danger and trauma, and exemplifies a symbolic quality that is prevalent in the generalized American projection on immigrants. Sharing a similar aesthetic assertiveness, Jose Villalobos’ Botas para LIegar al Cielo (2022) is a large-scale installation of ornately cut and decorated boots (the style of which are staples of Norteño culture) that are suspended in a gradually ascending pattern, traveling a path of earth laid down on the gallery’s floor. The boots gain wings and fly away, offering a hopeful and liberatory counterpoint to Cabrales’ somber plays. 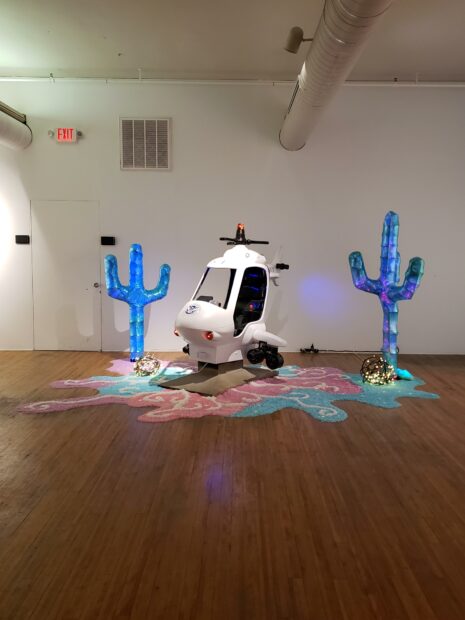 Mid-sized black and white linocut prints by Juan de Dios Mora occupy the space across from the Botas. Their mythological/iconic subjects, adorned with ancient and contemporary attire and in surreal landscapes, are rendered within the style of the Chicano printmaking tradition. The works are powerful, tender, totems to a collective spiritual, aesthetic, and political history; they remind us of our past, what was lost, and what could be found again.

But the skin of the earth is seamless.

The sea cannot be fenced,

el mar does not stop at borders.

To show the white man what she thought of his

Yemaya blew that wire fence down.

This land was Mexican once 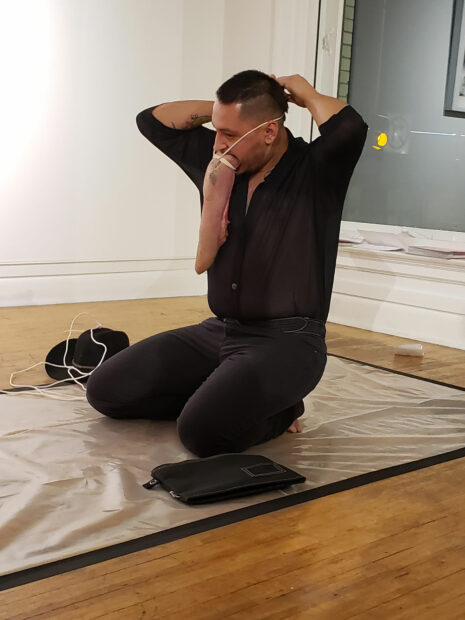 Of all the works, Jose Villalobos’ LENGUA (2022) left the most lingering impression. A lone photograph of a masculine head in profile with a large (what I assume) cow tongue protruding from the figure’s mouth, fastened by string, only tells half the story. This is a document of a performance I missed (but viewed online). The work involves Villalobos crawling the length of the gallery, lashing his prosthetic cow tongue along the floor; it’s pretty grotesque, a physically antagonistic action to draw attention to a deep lack, a gaping wound. Villalobos’ body of work attempts to give light to the problems of masculinity and lack of Queer representation (in this case: voice) within Norteño culture and his own specific upbringing. This simple action within the context of The Border is a Weapon powerfully conflates Queer and immigrant invisibility, and human and animal being. I was moved by the other-ness of the figure in the photo. When power deems a group of people “alien,” a quick and efficient path opens up to treat them like animals, dispossessed of their humanity. 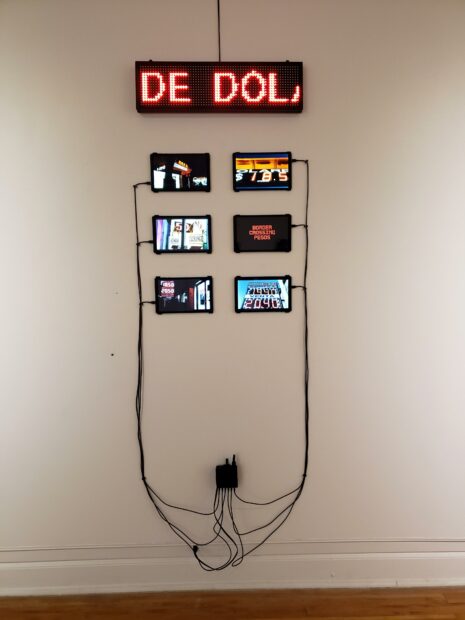 Dissociation and efficiency are key themes in the photo/video/multi-media installations of Maritza Bautista, who makes sites of money exchange her primary subject. Money talks, but functions best when it is silent. Bautista brings to life the endless and constant movement of currency through seductively colorful photographs of storefronts that urge you to buy and sell your dollars and pesos. Her work in the exhibition also includes an elaborate installation of LED signs, video screens and chirping audio clips (Compra y Venta (Buy & Sell) (2021)); this piece operates in jittery contrast to the stillness of the rest of the exhibition. An urgent (and at times unintelligible) disembodied voice says “no bodies present,” quickly stating the fact that “poverty traps people,” It evokes a deep anxiety grounded in economic reality: open borders are only for the rich, for the legally designated facilitators of commerce. The North American Free Trade Agreement (NAFTA) (1994) made seamless the exchange of goods between Canada, Mexico and the United States possible, while demolishing local industries on each side of their borders. The migratory response to this economic devastation allowed for the creation of a whole new billion-dollar industry of private prisons and detention centers, fueled by mythologies of invasive immigrants with invasive drugs. The border is dead to human interaction; only money can be exchanged.

How can these zones be brought to life?

The Other Border Wall Project (co-organizers of the exhibition), a team of three artists and designers (Tereneh Idia, Leah Patgorski, and Jennifer Myers), offers a reassertion of individual and collective agency into the dead space of the border. Tucked into a corner of the show, their contribution features a whimsical series of “anti-wall” proposals offered in response to the Customs and Border Protection’s 2017 request for “Other Materials” Border Wall Prototypes. Their original redesigns feature hammocks for resting, lighthouses to lead the way for asylum seekers, pipe organs operating as open and participatory gateways, and an idea to provide clean, flowing water as human alternatives to the current impediment. The designs are framed alongside the proposal requirements, government confirmation/rejection emails, and solicitations by contractors to provide assistance and materials; the objective way in which the materials are presented emphasizes the subtle humor of the idea. The project managed to dip below the realm of images, symbols, and aesthetics, triggering a response from the bureaucratic systems that keep things in order on the surface. Inserting art and liberatory desires directly into the flow of contracts and commerce manifested a concrete acknowledgement by the state (if only a rejection).

The Border is a Weapon traces a loose path through the violent and punishing terrain of the border, moving through the high key symbolic conditions and material representations that manifest the area’s reality in the eyes of its artist. The exhibition reveals that while it is important to account for the images that define our perspective, we must balance them with the desire to dig beneath the surface and reveal the systems flowing rapidly beneath the dry riverbed if we, and our cousins under colonialism, are to survive.

Deconstructing Machismo (and Then Some): A Chat With...