Juan de Dios Mora’s “Laters” is More Attention-Getting Than a Chancla Slap to the Face! 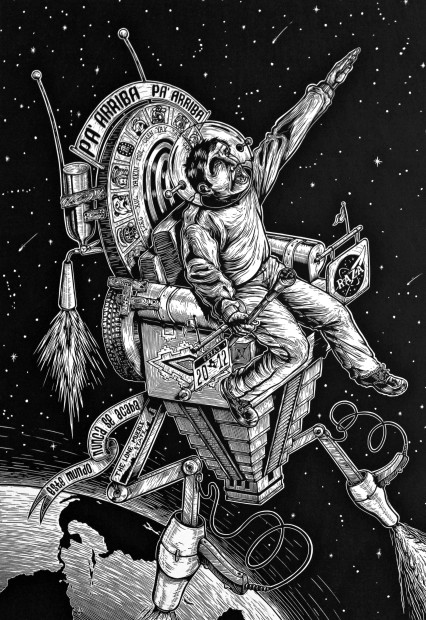 Juan de Dios Mora‘s exhibition Laters delves into an imaginary sub-reality created on the U.S. and Mexico border. His linocut prints depict mechanical vehicles in a projected Mayan end of the world. There is an undeniable Latin presence in his work and visible influences of legendary Mexican artists of the past, particularly 19th century satirist and printmaker José Guadalupe Posada and the early 20th century Diego Rivera, whose murals acknowledged indigenous heritage. Mora’s work pulls from those now-traditional styles and enlivens them with contemporary themes. 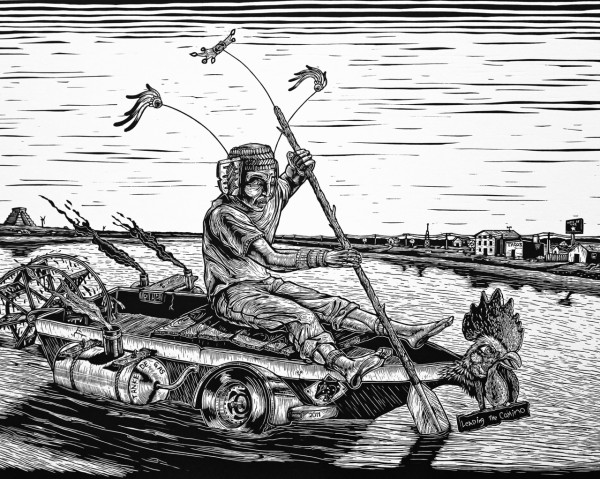 The pieces have the rural essence of many border towns, only slightly exaggerating reality. If you were to see Leading the Camino (Leading the Road) or Mi Nave Can Fly! (My Spaceship Can Fly!) parked next to you on the road, it would be just another art car. However, in Mora’s created context they are carrying years of cultural influences exposing the innate skill of human adaptation. 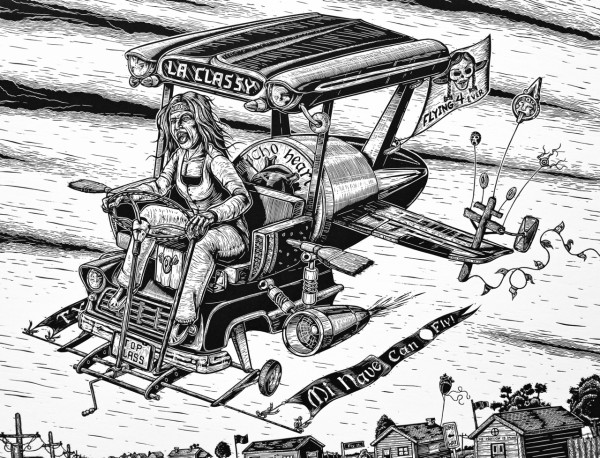 His pieces are engaging and genuine; they invoke response. The works are structured and tightly woven with symbolism as seen in Futura Nave Espacial Maya del 2012 (Future Mayan Spaceship of the Year 2012). Mora has composed his space vehicle from iconic Texan and Mayan symbols. As it is propelled into space, a banner waves reading, “este mundo nunca se acaba” (this world will never end). The work peers into the world of assimilation where cultures merge creating vehicles of optimism. I suppose if the world were in an ever-looming apocalyptic state I too would want to ride out in a Futura Nave Espacial.

The exhibition is open through February 10, 2013 at the Southwest School of Art located in downtown San Antonio. The space is known for their contemporary art exhibitions showcasing Texas artists. Click here for additional information about this exhibition.

Crystal Benavides, a native Houstonian, is a marketing/development consultant and curator. While working under Houston’s local arts agency, Crystal distributed over $40 million into Houston’s art community, funding approximately 260 cultural organizations and artists. She also curated Cohesive Discord, listed by Glasstire as one of the top ten installations of 2009, and Interconnectivity, the gallery’s first all-media exhibition. Crystal was formerly assistant registrar at the San Antonio Museum of Art (SAMA), working with the Rockefeller collection of Latin American Art spanning pre-Columbian to Modern art. While at SAMA, she aided in La Linea Encatada, Fotoseptiembre and Retratos: 2,000 Years of Latin American Portraits, working with artworks from over a dozen countries and over 70 national and international lenders. She is currently working towards a Master of Arts in arts administration at Goucher College, and is a mixed-media textile artist.

This fine exhibition is at the Southwest School of Art. Their name changed years ago.