Happy Holidays from all of us here at Glasstire! 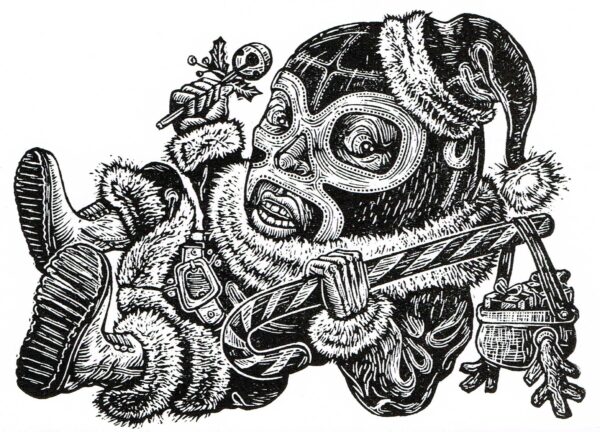 About Juan de Dios Mora
Working representationally and sometimes employing a surreal sensibility, San Antonio-based artist Juan de Dios Mora portrays images of the typical Mexican-American’s life, iconography, and beliefs. His objective is to bring people together with sentimental, satirical, sarcastic, and comical themes, and he hopes to evoke self-awareness and then to superimpose that awareness on the experiences of life. Mora has lived in a border town (Laredo) where different cultures clash and yet expressions and emotions coalesce. The traditions, racism, and stereotypes of the U.S. have introduced Mora to the reality of being an immigrant in a different country.

Mora received his Master of Fine Arts in Printmaking from the University of Texas at San Antonio. He has been the recipient of numerous awards, and in 2017 the McNay Art Museum in San Antonio held a solo exhibition of his linocuts. His work is in numerous public and private collections across the country, including the Smithsonian American Art Museum in Washington, D.C.

Comic: Do You Believe in Santa?

YuleTube: Ghosts of Christmas TV Past