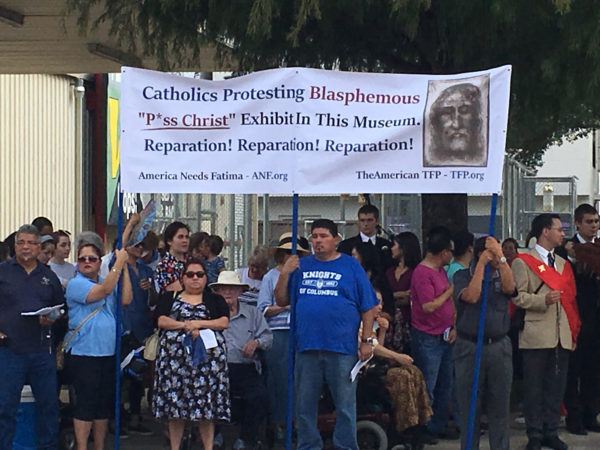 Yesterday, June 24, 2017, from 4-6 p.m, a group of protestors gathered outside of the Station Museum of Contemporary Art in Houston to protest the museum’s current exhibition of photographs by Andres Serrano (read our review of the show here). The group of approximately 90 demonstrators was predominantly comprised Catholics who object to Serrano’s infamous 1987 photograph Immersion (Piss Christ), which depicts a crucifix immersed in the artist’s urine. The photograph, which is included in Serrano’s Houston show, has been contentious since its inception—many people, including then-Senators Al D’Amato and Jesse Helms, were angry that Serrano received funding from the National Endowment for the Arts for a project that included a “blasphemous” work of art.

This opinion lingers today. Through prayers and song, those gathered collectively expressed their dismay at the photograph, and some of the protesters spoke to Glasstire, stating their objection to both the work’s funding and to its content. One protestor said that if the photograph showed devotional objects from other religious immersed in urine, there would be “riots,” and the image would be considered “hate speech.” In contrast, he claimed that since the image was made using a crucifix, we are living in an age where it is “open season” on Christianity.

This protestor also spoke about how Piss Christ was funded by taxpayer money, claiming that it is hypocritical that there is “so much anti-Americanism in the art community, but [the art community is] happy to leach off the US taxpayer’s money. And they complain about money that is spent to protect us against terrorism, but they’re happy to spend US tax dollars on jars of urine with crucifexes in them.”

The Station Museum was apparently aware of the protest before it occurred, and posted to its Facebook page prior to the demonstration’s start:

We support the freedom to gather and to speak truth to power, and would like to invite our community to come out and show their support for the Station Museum to uphold freedom of speech and freedom of expression… . The Station Museum of Contemporary Art organizes exhibitions that question our society’s morality and ethics. It embraces the idea that art plays a critical role in society as an agent of creativity and civil discourse and as a resource that deepens and broadens public awareness of the cultural, political, economic, and personal dimensions of art.

Since Serrano’s exhibition has opened, the Station has received numerous negative reviews on Facebook, many of which cite Piss Christ as the reason for their one-star rating.

In 2012, Serrano spoke to The Guardian about his controversial photograph:

At the time I made Piss Christ, I wasn’t trying to get anything across. In hindsight, I’d say Piss Christ is a reflection of my work, not only as an artist, but as a Christian. The thing about the crucifix itself is that we treat it almost like a fashion accessory. When you see it, you’re not horrified by it at all, but what it represents is the crucifixion of a man. And for Christ to have been crucified and laid on the cross for three days where he not only bled to death, he shat himself and he peed himself to death. So if Piss Christ upsets you, maybe it’s a good thing to think about what happened on the cross.

See more photos of the protest below, along with a two-page flier that lays out the protestors’ reasons behind their demonstration. 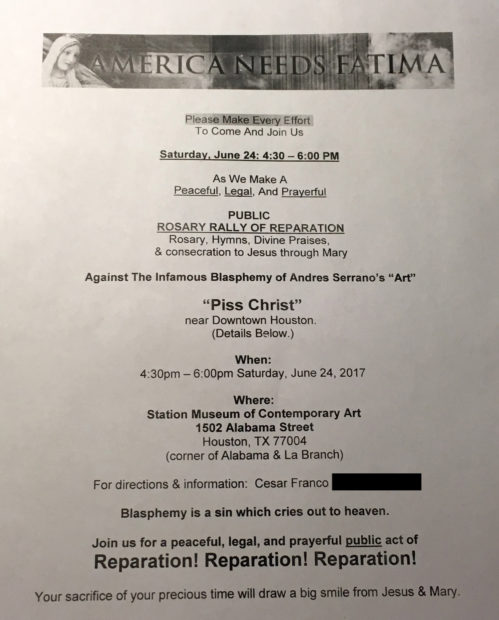 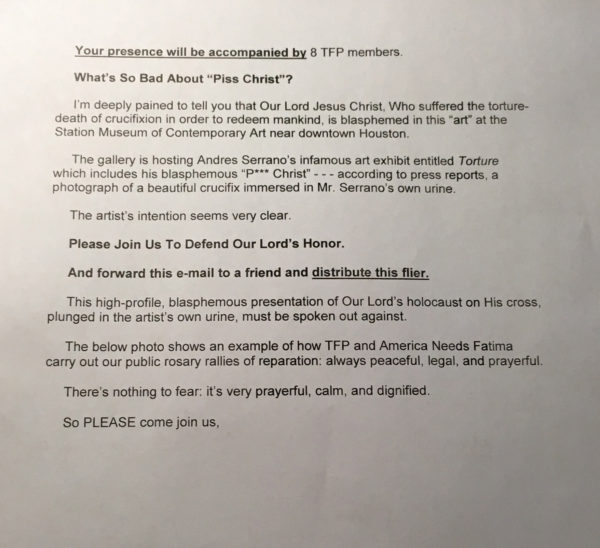 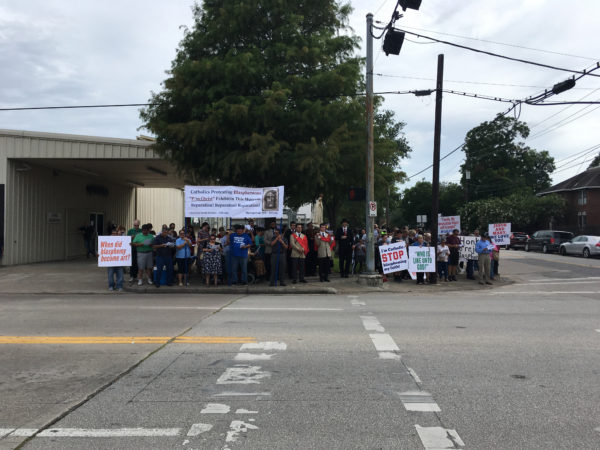 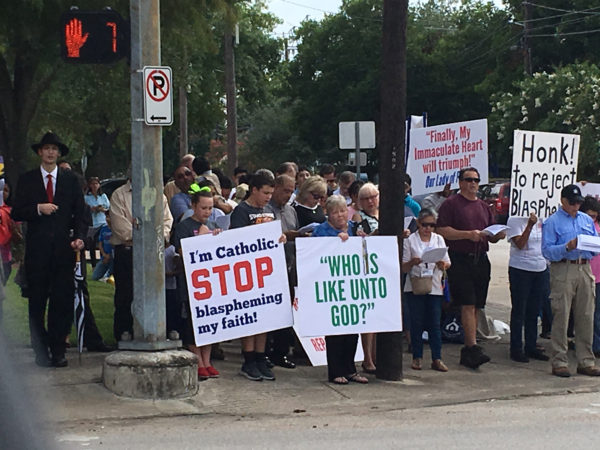 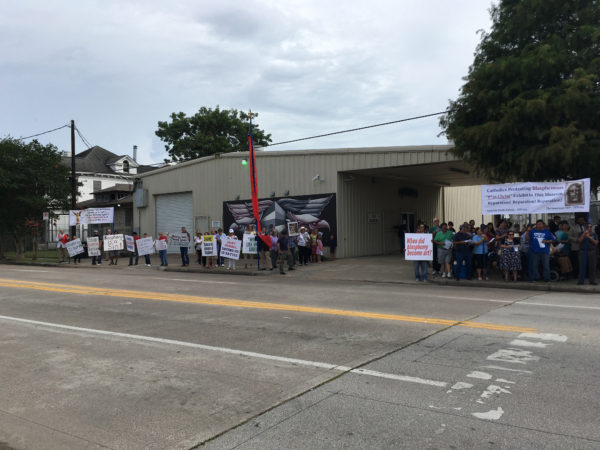 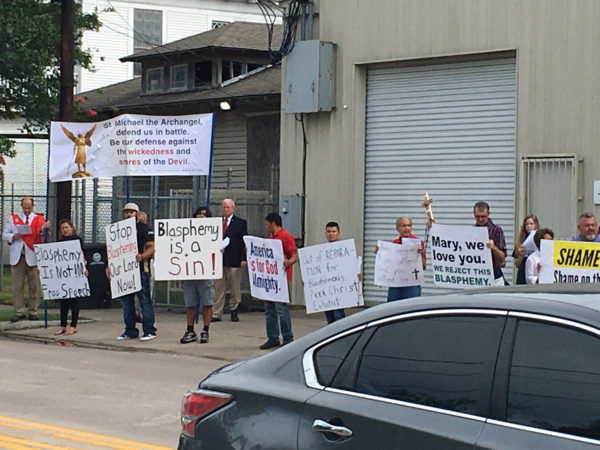 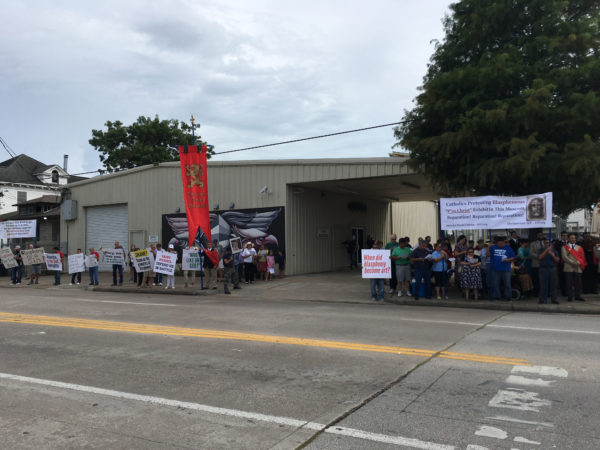 Andres Serrano at the Station Museum of Contemporary...