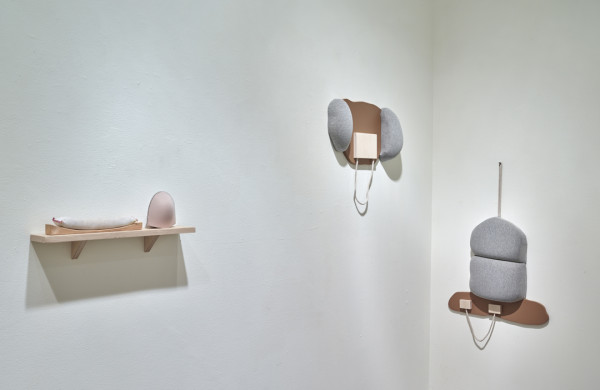 Since seeing Lily Hanson’s awkwardly elegant abstract and anthropomorphic assemblages for the first time at Paul Slocum’s gallery And/Or in Dallas in 2008, I have been struck by the work’s consistency in witty concepts, a tension of opposites—soft and hard, flat and dimensional, still and moving—and its underlying sexual charge. Hanson has not shied away or second-guessed a set-up of compelling ideas, materials, and methods that she made her own while still in graduate school at SMU fifteen years ago. Although her work is deeply informed by far-ranging influences in 20th century sculpture, especially the post-minimalist artists who brought performance, the body and process to the table such as Richard Tuttle, Hanson has found ways to keep it fresh and inventive. But in her current and fourth show at Conduit Gallery, Hanson has brought restraint and a waste-not-want-not approach to her gestures. Tension is quieted. In turn, there is a kind poetry that is generous, expansive, and felt.

In the small Project Room, Hanson’s installation of ten sculptures and two paintings on paper (all from 2015) reveals her understanding of how objects can effectively work in a space to enhance each other and create new associations and narratives. Many of the works call to mind Fluxus toys, games, and gags from the 1960s. Overall, the works create a sense of repetition, pauses, and a witty rhythm that is both playful and poignant, upbeat and melancholy, more like a proto-punk Jonathan Richman song like I Was Dancing at Lesbian Bar instead of the punk rock that pushes Hanson in the studio (the title of her exhibition The Once Over Twice refers to the Los Angeles punk band X’s song of the same title). While her studio practice of seeking solutions through tough, physically demanding experiences is like the “fuck it, shitty shit happens, get over it attitude,” says Hanson and the DIY ethic of punk, it also speaks to Jasper John’s simple instructions to himself: “Take an object. Do something to it. Do something else to it.” 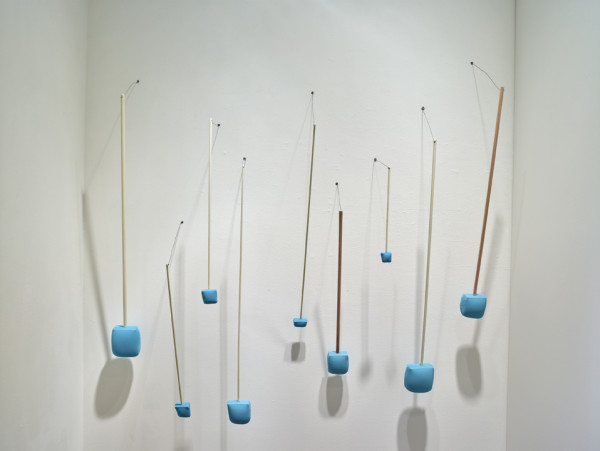 Music plays a part for her in other ways, from titles of work from punk and rock songs like master of puppets (Metallica) and jet boy (New York Dolls) to works that appear aural: i.e. capable of performing and producing sounds. Free money looks like a percussion instrument or piano hammers. Made of wire, wood, foam and fabric, free money, like other works in the show, seems familiar and functional. Connecting incongruous hard and soft materials create tension and energy: here meaning happens. This idea of creating meaning through incongruity is amplified in two hybrid works (elements of both painting and sculpture conventions) that resemble parts of a stereo system, component and component accessory. In both, soft, dimensional “speakers” abut flat pieces of hard wood; a rope is attached and hangs, evoking speaker wires. In guiding light, a simple piece of wood “squeezes” a piece of foam, creating an even stronger sense of synesthesia: sound is seen and felt. 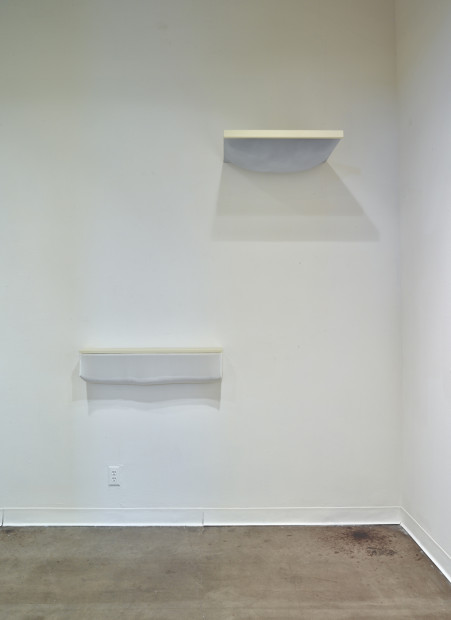 non-specific vehicle to somewhere else, 2015 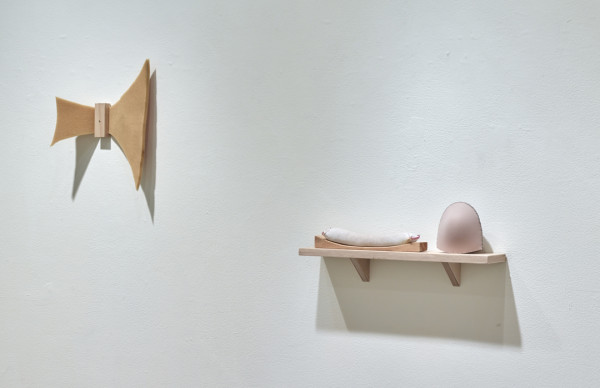 Two of my favorite pieces are non-specific vehicle to somewhere else and a fine romance. While the former recalls a desert-like landscape and the latter, a beautiful George Morandi still life, both function in the way certain songs give rise to intense memories of experiences and feelings of a particular place and time. In non-specific vehicle (from a Leonardo da Vinci quote on the alternative title of Mona Lisa—La Giaconda—that Hansen found in John Seed’s book The Artist Statements of the Old Masters), a soft pale fabric of silk holding either cotton fill or sand is attached to painted wood shelves that are installed at different heights. While the soft forms underneath the shelves call to mind how an Ellsworth Kelly painting often begins, as Simon Schama has written, with a moment of “perceptual serendipity—a shadow, a reflection, a partly obscured object or shape,” non-specific vehicle for me brings back memories of driving to Marfa, Texas listening to Tracy Nelson sing Love Has No Pride better than Linda Ronstadt, and glancing out the car window at the distant Davis Mountains. In a fine romance, an arrangement of pale colored “objects” (stitched together foam fillers for a bathing suit, sand-filled weight for flattening rolled works art, and a wood mount) on a wood shelf haunts like a memory of an elegiac domestic scene, seen and not seen a hundred times, while standing at the kitchen sink. 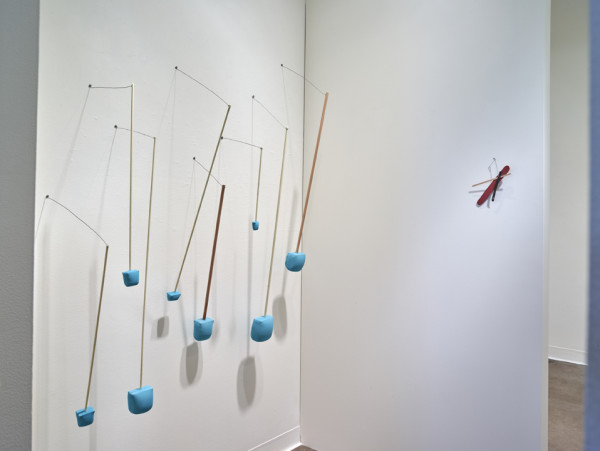 As in previous bodies of Hanson’s work, most of the work in this show incorporates sewing methods and materials (the images in the two small paintings on paper are from a book entitled The Art of Manipulating Fabric). But in her case, it is not an attempt to make a political commentary on women’s work, craft, or post-feminism (though all art, in a sense, is political). Instead, while in graduate school, Hanson learned to accept this part of her personal history (she and her mother both sew, but her Finnish grandmother “hated craft”) as a means to bring rigor to her investigations of formal structures and solutions.

At the entrance of the Project Room, the piece almost blue is the show’s raison d’etre. Similar to one of Joseph Cornell’s poetic universes in a box, this small, simple assemblage of pastel painted pieces of worn wood draws you into its strange world and internal logic. It does what all art does (good art that is): it stimulates your curiosity, empathy and creativity. Almost blue makes you ask questions and consider the artist’s process and choices. As Joseph Beuys once said: “…and then the human mind receives the voice of the …fat and felt whom he allowed to speak. And the man receives the words and welcomes the thoughts of other men, in a world where life unveils itself.”

Lily Hanson’s work is at Conduit Gallery, Dallas, through Dec. 31.