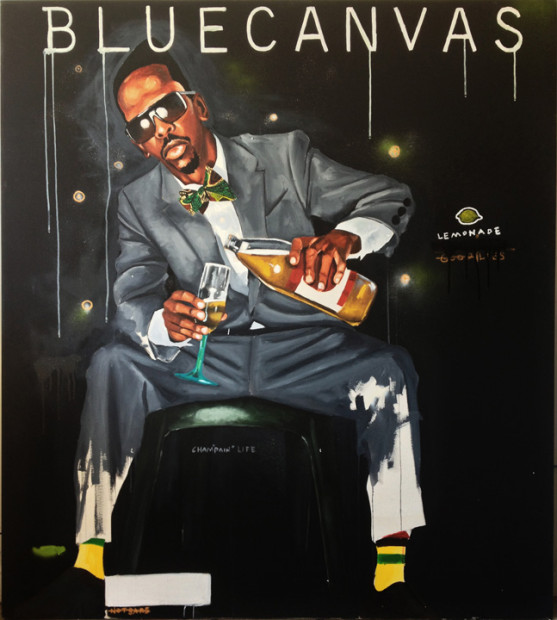 Sophisticated Ignorance a.k.a. They Gave Us Lemons

Fahamu Pecou was not always an internationally known artist. In the mid-2000s, Pecou created an alter-ego, “Fahamou Pecou is the Shit,” and painted himself on the covers of notable art magazines. Make no mistake—they were gorgeous paintings, but they also served as a vehicle to put a mostly white art world on notice. Pecou adapted the rules of an early 2000s hip hop marketing campaign to the contemporary art world in an act of love, satire, and brilliance.

How To Eat Your Watermelon finds him back at his confrontational best. His paintings are giant Jenga puzzles daring you to take out one last block, poised at any moment to tumble into uncomfortable corridors where race, masculinity, past, and present meet. They are also technically excellent paintings—especially Pecou’s treatment of hair and lips in the pieces Toys Aint Us and Sophisticated Ignorance aka They Gave Us Lemons. 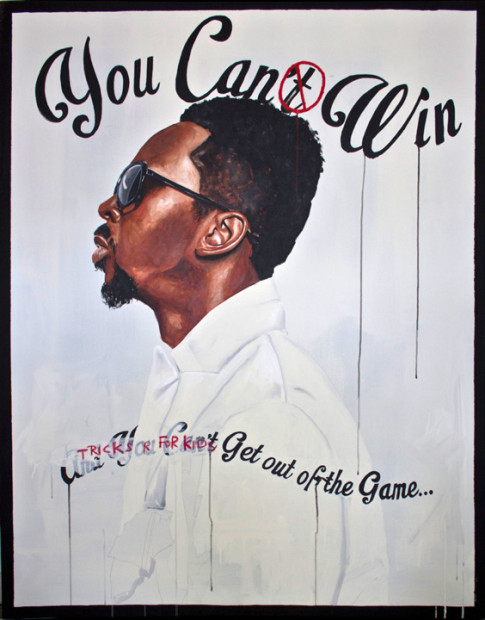 Toys Aint Us is a profile self-portrait of the artist wearing sunglasses and a white suit jacket, head slightly cocked—defiant, a king. The words “You Can’t Win” drape his head in large letters, and across his shoulders is the phrase “And You Can’t Get Out Of The Game.” Pecou plays with the word “Can’t” in both phrases—in the former the letter t has a red no smoking sign symbol over it, and in the latter there are red letters that say “Tricks r For Kids” over the “And You Can’t.” Thus a new possible message emerges: “You Can Win/Get Out of The Game”. 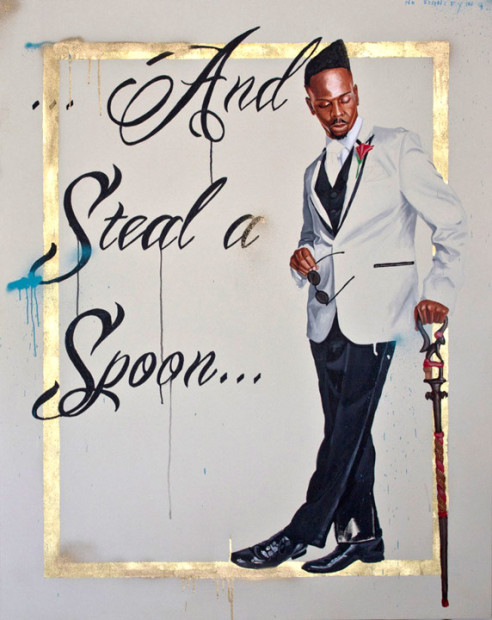 Most of all, no signifying

In Pecou’s work the small gestures, the hand scrawled phrases, have more emotional depth than the larger graphic text. In the piece Most of all, no signifying, the artist is dressed immaculately in a formal tuxedo, holding a cane that references African sculpture, stepping out of a golden frame, with the words “And Steal A Spoon” in large letters to the left of the figure. In the right corner is scrawled “no signifying.” The reference to stealing a spoon comes from Petey Green, the great black D.C. radio and television personality who, after dining at The White House, famously quipped to the Washington Post, “and I stole a spoon.”

The phrase “signifying” has deep roots in African American culture and has evolved over time from verbal boasts and taunts to witty banter to demarcation of power between the black and white communities.  Almost everything in Pecou’s work signifies something else. From his use of spray paint, the African cane, the urban hair cut, the sartorially sharp clothing, everything signifies a black male who has arrived. Yet, the admonishment “and steal a spoon” is a reminder to not forget where you come from. Even though dining in the White House today would mean dining with a black President, it wasn’t fifty years ago that Petey Green was using his voice to quell riots in Washington, D.C. after the assignation of the Martin Luther King, Jr.

The past hangs heavy over Pecou’s work. No matter what clothes the figure wears or how aspirational the context, Pecou can’t resist including imagery that grounds the figure back into African American history and black urban culture. In Sophisticated Ignorance you find the artist staring directly at the viewer. On the cover of Blue Canvas, he’s in a kente cloth bowtie and grey suit, pouring a 40oz into a champagne glass, sitting on a porch chair. Clothes are armor in Fahamu’s painting. In his earlier work the artist was often found in hip hop attire; now it is sharp suits that reference black vaudeville and the chitlin’ circuit. Living the “champain” life – unable to get away from the past. 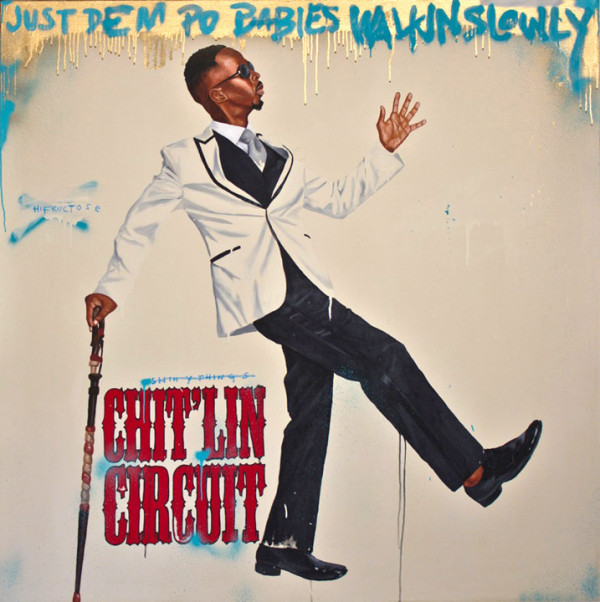 Hope…Maybe, If, Prob’ly showcases Pecou’s love for hip hop. Both the title and the phrase in the painting comes from the title track of the classic Outkast album, Aquemini. Pecou challenges the viewer to not let appearances deceive, to not get distracted by things that are fake (hi-fructose) or shiny (no shiny things). In How To Eat Your Watermelon, Pecou teaches us that the best way to enjoy our art, our history, our experiences, and even our watermelon is authentically, without pretension, and perhaps with a twang of salt.

Where is this show?

It was at Conduit Gallery Dallas. It closed on Saturday.