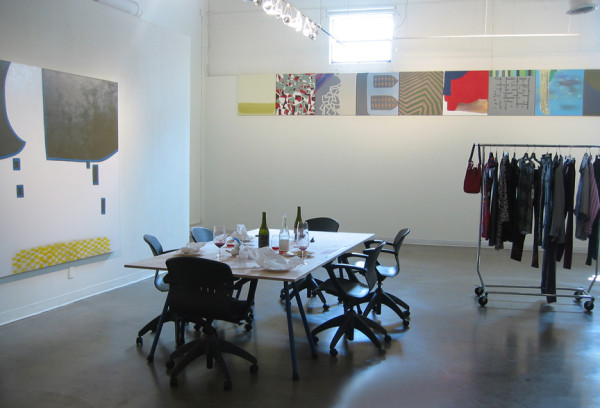 For “WALKINCLOSET,” his show at Conduit Gallery, Ludwig Schwarz assembled:
– Four six-foot-tall paintings;
– Ten 30-inch square paintings;
– A wheeled rack of clothes from the Neiman Marcus outlet shop, Last Call;
– A makeshift table bearing the remnants of a meal;
– Assorted chairs;
– A short video on a five-minute loop;
– A guitar and stand;
– A faux didactic wall text which tells a fictional comic-detective anecdote and acknowledges real and fictional contributors to the exhibition.

The checklist for the show identifies these items as “accessories” for a game called Walkincloset, which the show’s press release says is the invention of a character named Joaquin Klose who abandoned his family after he made it up. The press release reads like Groucho Marx doing a Jorge Luis Borges routine. Klose is described as “a leading man and the son of a decorated pawn broker…a man of little means and a fan of Little Feet [sic].” One morning, Pierre Menard shot an elephant in his pajamas, as it were.

Schwarz’s instructions for the game read very much like what an artist does when mounting a show:
“Find a space and claim it.*
“Call it WALKINCLOSET and do whatever you want.
“Invite people to participate if you desire.
“Tell others about it
“*If the space belongs to someone else you may ask for their permission or simply play the game in your head.”

And that, apparently, is that. Installing the show involved an evening of food and wine (the table). The leftovers of the evening remain—empty and half-drunk wine glasses and bottles, crumbs, spills, and a drawing reportedly made during an architect’s consultation about (what else?) a walk-in closet—evidence that Schwarz and Co. played the game in the gallery. 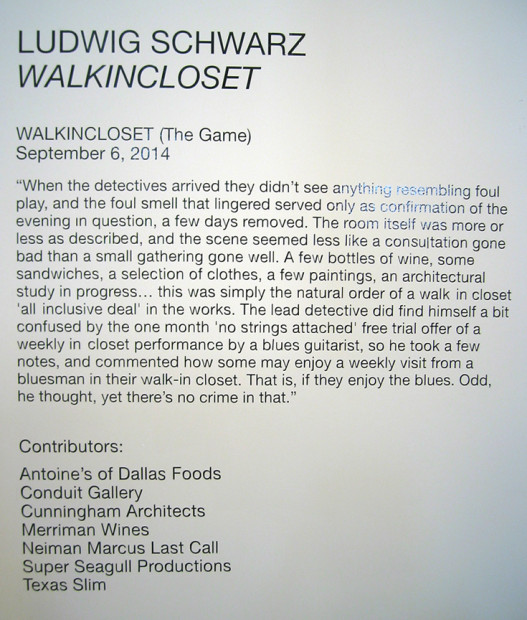 Schwarz has troped the space of an art gallery like this several times before. In 2001, for example, he converted Dallas’ Angstrom Gallery into a Rent-a-Center store. Visitors could choose among furniture, appliances, and Schwarz paintings, which they could buy outright or pay off monthly at twice the price: shades of Sigmar Polke and Gerhard Richter’s “Capitalist Realism” show from 1963.

The Angstrom show and the current one both interrogate themes of economic and aesthetic value and a kind of tattered luxury. The cost of a marked-down Alexander McQueen dress commingles in the narratively charged gallery space with the cost of a good painting. Each is a form of luxury, as is a house spacious enough to offer a closet you can walk into. (Gallery staff reported that Schwarz recently moved into such an apartment.)

So what is the value of a good painting? What the market will bear, I suppose, but also the pleasure it offers to the viewer. 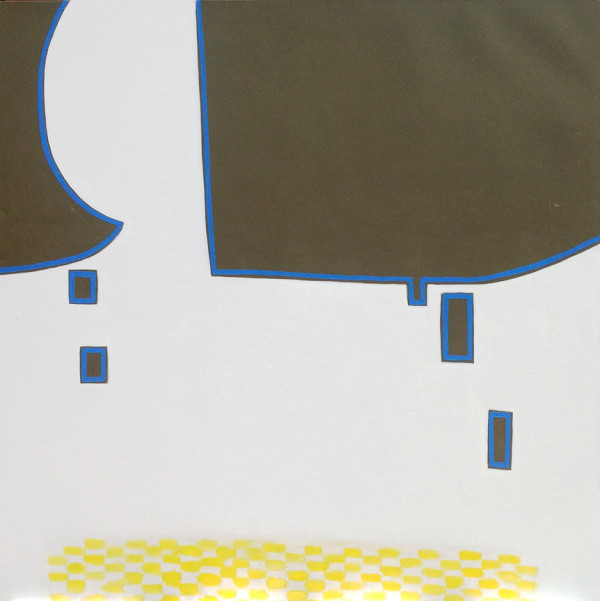 Untitled (The illusion of space and then time and then space again), oil on canvas, 72 inches square, 2014

At any rate, these are very good paintings. Schwarz is one of the most inventive painters I know. His shapes and proportions teeter at the edge of awkwardness and constantly redeem themselves. He can show us all new things about pictures. And he frequently does. Sometimes his motto seems to be “Why make a regular geometric form when an irregular angularity or deformed lozenge will do the trick?” Spatial surprises are everywhere. One untitled painting (or, “The illusion of space and then time and then space again”) enlists a field of yellow marks —almost a grid—which floats at the bottom (of course it floats at the bottom) where a dominant white shape appears to dissolve into smudges. 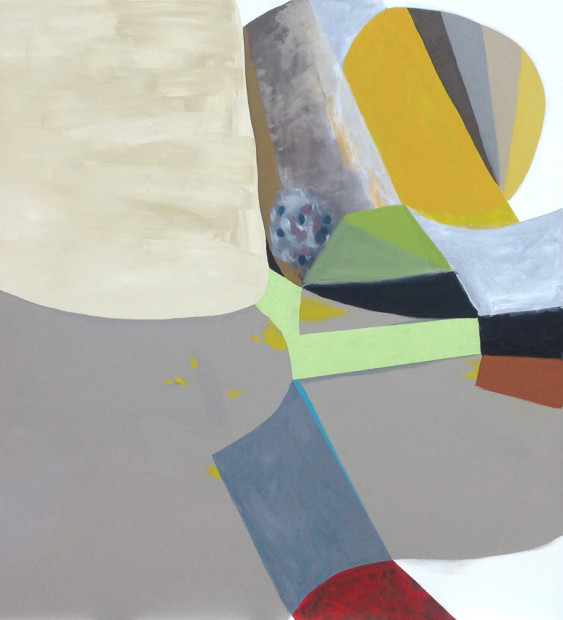 “Untitled (Nuttles)” incorporates broad irregular passages of sand- and putty colored glossy oil paint down and left of the composition, while the upper right is more active, with patches of ochre, green, and black and scumbled light values over darker passages. It shouldn’t make sense, but it does. (Nuttle = a puddle of seepage after sex, according the online Urban Dictionary.)

In “Ten Untitled Paintings Celebrating The Playing Of Walkincloset (The Game),”  the frieze of small paintings hung high on the gallery’s back wall, a green and scarlet patterned shape seemingly punches a hole in the picture plane it sits on while ridiculous zigzags make perfect sense in a painting a little farther down the row. 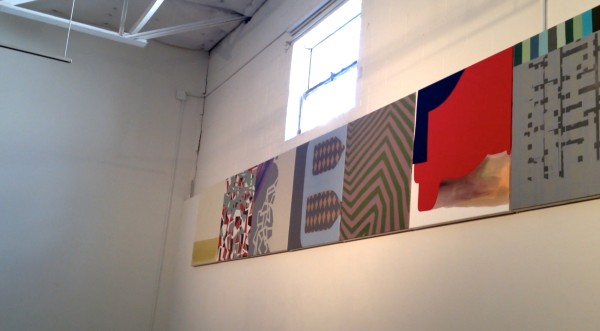 Partial installation view of Ten Untitled Paintings Celebrating The Playing Of Walkincloset (The Game), oil on canvas, 30 x 30 each, 2012-2013

In 1905, Henri Matisse produced a painting titled “Luxe, Calme, et Volupté.” It’s a sun-dazzled dream of nude women on a Mediterranean beach. Matisse found its title in a line from Charles Baudelaire’s poem “L’invitation au voyage.” It translates literally to “luxury, calm, and voluptuousness,” but the writer and translator Richard Wilbur renders the phrase more poetically: “richness, quiet, and pleasure.” For Matisse, the voyage was aesthetic, the luxury was contemplative, the journey was in the mind, not across a landscape or a map. These are romantic-sounding ideas. In their innocence of the crimes and horrors of the past hundred years, they sit uncomfortably on our ears.

And yet pictures like Schwarz’s can offer much in a room where you can do whatever you want. Let’s take our luxe where we find it.

I just wanted to say “hello” to Rainey! 🙂