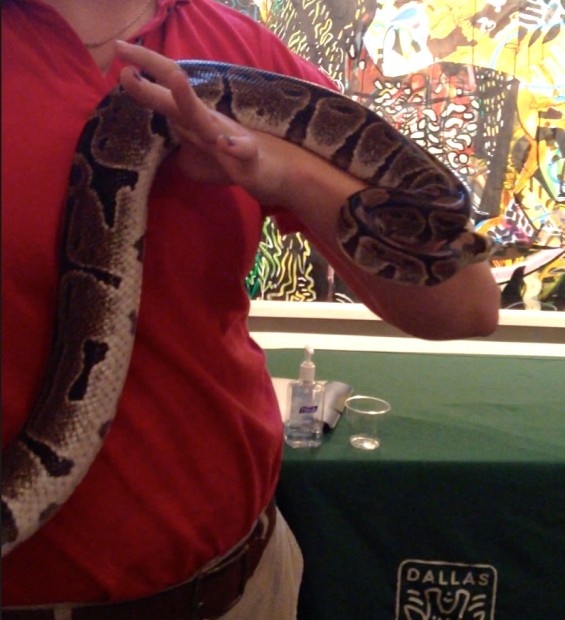 On a recent hot Saturday evening in Dallas, the artist Jules Buck Jones stood on the outdoor loading dock in front of Conduit Gallery and watched two young women unload large animal crates from the back of an air-conditioned van. Most of the crates were draped with fabric, and it was impossible to discern what they held. “Do you know what they brought?” someone asked Jones. He answered that he had no idea but he was smiling. Bearded and wearing shorts and a backward baseball cap, he looked like an overgrown kid in his element. For him: Art + nature = bliss.

The event was a closing reception for Jones’ solo show at Conduit, and he’d come up from Austin to give a brief talk about the work. But the main attraction, really, was the promise of live wild animals brought in from the Dallas Zoo. As art viewers filed into the gallery and began to circulate, wine or beer in hand, the two red-shirted zookeepers quietly lined up crates along the back wall of the gallery, alongside a table which was set up just in front of the tour de force of Jones’ show: a giant collage depicting a great fiery cat, camouflaged and stalking its way through a dense jungle. (Sold!)

Viewers had no idea if any great or small cats were among the live animals joining the crowd that evening, but as people walked from watercolor to drawing to sculpture—and all of Jones’ work is thick with animal imagery—a faint, jittery anticipation hung in the air. People who are drawn to Jones’ work might well be people who share some of his concerns: conservation, extinction, copulation, totemism. They might be people who want to see some of the real thing in action, and Danette Dufilho, longtime Conduit assistant director, had come up with the idea to invite some feathered, scaled and furred residents of the zoo. 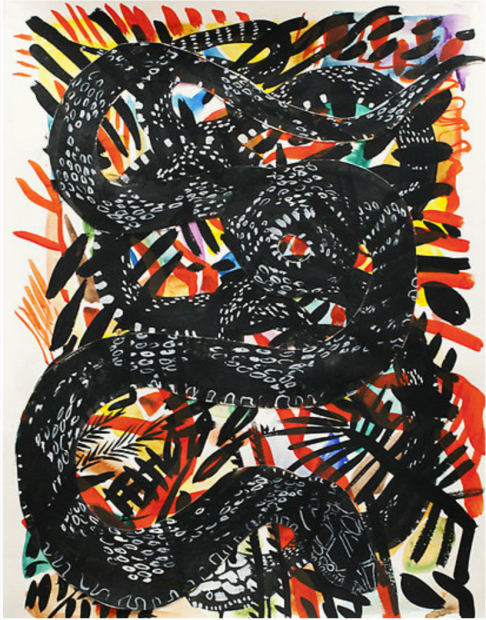 Oddly, there didn’t seem to be a lot of thought about how art plays second fiddle to nature. In the realm of spectacle, nothing a human makes can compare to a living and breathing serval cat or fat python or white barn owl (or mountain or river or desert plain): nature wins and wins and wins, and humans copy it, exploit it, destroy it, and then nature wins again.

Luckily, Jones seems well aware of this and occupied by it; his work feels like an exploratory tribute rather than any feeble attempt at competition. He spends a great deal of time communing with nature, and worrying about it, and makes no bones about the natural world being his only inspiration. As an artist (and public speaker), Jones comes off a bit like a wild child. Formality doesn’t interest him. It’s easier to picture him perched in the canopy of a forest than standing on the concrete floor of a white-cube gallery.

Also not entirely at home: the two willowy and delicate young flamingos who waltzed out of the comically tall crate and made their way through the crowd to the middle of the gallery. Their release wasn’t announced, so as they moved and caught people’s eyes, a wave of gasps followed. Aruba and Bermuda, both Carribean flamingos, were so shockingly elegant and exotic that for about three minutes it felt like the air had been sucked out of the room. More predictably, dozens of cell phones emerged and were aimed toward the birds like a mute paparazzi. The creatures might as well have been from Mars. 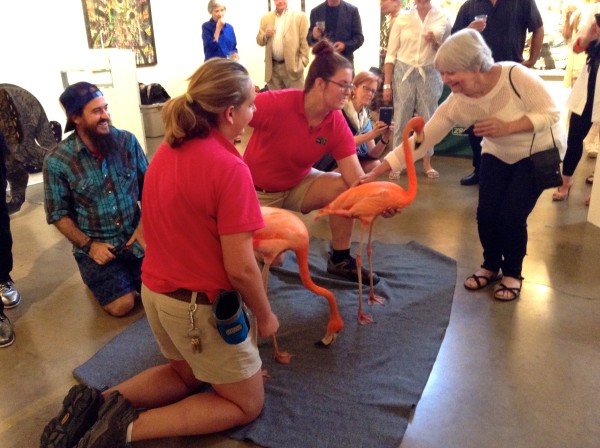 Jules Buck Jones to the left; Aruba and Bermuda on show.

The affable zookeepers let the birds wander the boundaries of the small blanket sprinkled with bird seed; Jones’ pretty quickly crouched down near them and reached out. One of the keepers started explaining the particulars of the species and encouraged the people to touch them if they wanted, though most of the crowd held back in rapt fascination. The birds, placid save for the odd honk, rocked on their impossibly long and delicate legs and splayed, translucent feet. Their plumage was far from the kitschy Pepto-pink  of plastic lawn decoration; it was a rich softness ranging from to coral to carnelian, and grew in intensity as it moved up their necks. As a point of focus, even for Jones, the birds were such intense magnets that the walls of the gallery might as well have been blank.

The crowd started firing questions, and the zookeepers kept apace: How old are they? (Two, which is young); are they nervous? (Not at all); are they migratory (yes); why are they pink (because they eat a lot of algae rich in carotenoids). The questions grew more primal. Do their legs break easily? (Yes. But not their necks.) What do they look like when they fly? (Like pelicans, but they need room for takeoff.)

The flamingos would be a hard act to follow. But eventually they were herded back into their big wooden box, and from then on the animals came out two at a time, one per keeper. Out came South American armadillo (curled up like a sleeping croquet ball); a velvety Peruvian chinchilla (she kept her nose burrowed in crook of the keepers’ arm as Conduit owner Nancy Whitenack stroked her from head to tail); a big tortoise, the size of a manhole cover, who “danced” when the keeper set him on the table and scratched his back. Some people bolted to the other gallery space when the python came out, but came back when a dapper little penguin emerged. A very small alligator (about the size of a portable bicycle pump) was as still as a craggy stone; a big snowy barn owl cocked his head to triangulate the odd bouncing acoustics of the gallery space. 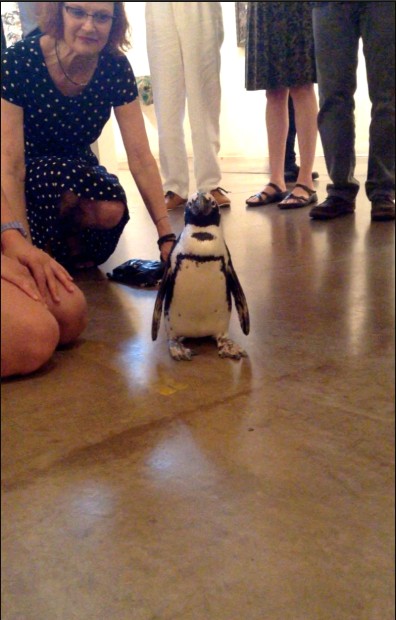 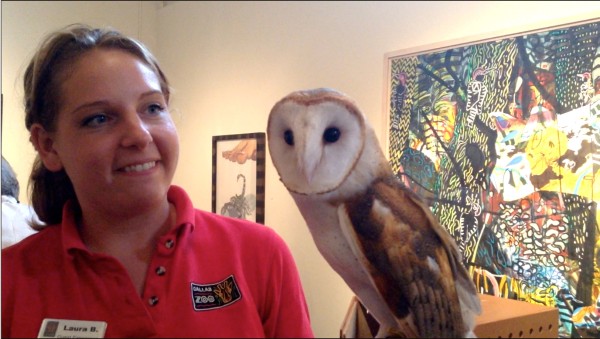 Each animal was greeted with oohs and aahs and a thousand questions. This show-within-a-show was charming, disconcerting, and fuzzy in its implied relationship to the art. Extracurricular, non-art events in galleries are ubiquitous nowadays, but they have a way of pushing art into the background, or off the radar entirely. In this case, the artist not only didn’t seem to mind; he seemed relieved that he wasn’t trapped in the headlights at a standard gallery reception.

As a finale, the keepers told the crowd to back up (and no touching); out came the African serval cat, on a long leash. At about 25 pounds he was all legs and as sinewy as a distance runner, and as he leaped on and off the table he was wholly occupied by the treats one of the keepers tossed out to him every 30 seconds or so. His feral moodiness permeated the gallery; this skinny bundle of spotted fur, claws, fangs and muscle looked like it could take out Floyd Maywether in about ten seconds. As a strange visual bonus and perhaps a poetic tip of the hat to Jones, the big collage behind the cat offered a surprisingly effective camouflage against any cel phone camera lens. 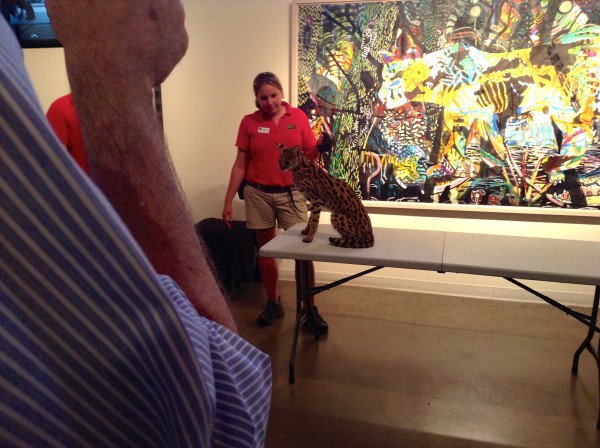 Then back into the his crate he went (he pounced in after a treat), and the show was over. It was time for Jones to talk about his work. Knowing he’d been upstaged, he kept it brief, and once he was finished and the last visitors moved toward the door, a few caught sight of Jones posing for a photo with the little penguin. He’d asked the handlers for one last audience with the bird.

It was such an odd coincidence! I looked it up yesterday to attach a link to that sentence, and the Gizmodo piece and all these obits came up. RIP. I titled it in dedication, I guess.

Jannis Kounellis brought horses into the gallery in a 1969 piece that’s been restaged:

On of my favorites. I wanted to restage it at FWCA. I can’t remember how my board responded to the proposal.