There are several things to be said about Alejandro Iñarritu’s virtual reality installation and experiential work on exhibit at the Food and Fiber Pavilion in Dallas’ Fair Park. For one, it premiered at France’s Cannes Film Festival in 2017, and has been installed on the grounds of Fair Park with expert precision. The piece was previously exhibited in Montreal, Canada and Aurora, Colorado, and there are no current plans for it to travel anywhere else in Texas. This is a dream opportunity for Dallas: it is an innovative art experience using cutting-edge technology that you can’t see anywhere else. It is also a multimedia happening that makes use of Iñarritu’s narrative stylings while challenging the conventions of a formal exhibit. The Nasher Sculpture Center is operating the experience with support from the George W. Bush Presidential Center, both of which are located in Dallas. This is the kind of show that should happen in Fair Park all the time.

I will say that I think the piece is a nice use of the building, all things considered. Something you should know about Fair Park: it’s only a pain to get to in September, because of the State Fair of Texas. The rest of the time, the gates are wide open. There was no parking attendant for my visit, and getting to and from the Food and Fiber Pavilion was a breeze.

How shall we write about “immersive” experiences? I could say that the staging of the experience was quite polished, easy to understand, and engaging. Overall, it was exceptionally sharp. Compared to my visit to Hopscotch in San Antonio, every step was considerably more planned and connected.

As for the content of the show, I’d rather leave that to the audience to see. There is at least one moment that caught me completely off guard, and I found it to be enlightening and valuable. For this reason alone, I hope that residents of Dallas take advantage of this rare opportunity to see the work. For a little added context, I offer this message from Iñarritu’s exhibition statement:

“VR is all that cinema is not, and vice versa; the frame is gone and the two-dimensional limits are dissolved… During this realistically unreal experience, our brain wires and most of our senses were tested.” 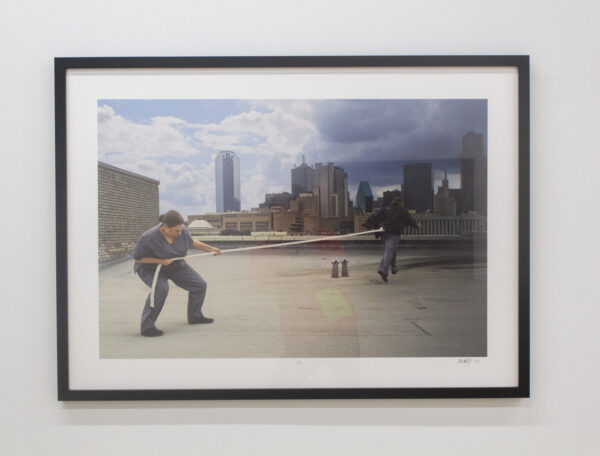 One of Erica Felicella’s pieces in “Conflicted States,” on view at Cluley Projects 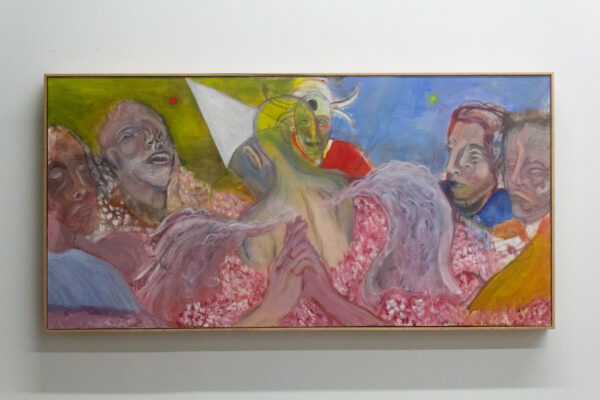 One of Ethan Mertz’s pieces in “Conflicted States,” on view at Cluley Projects 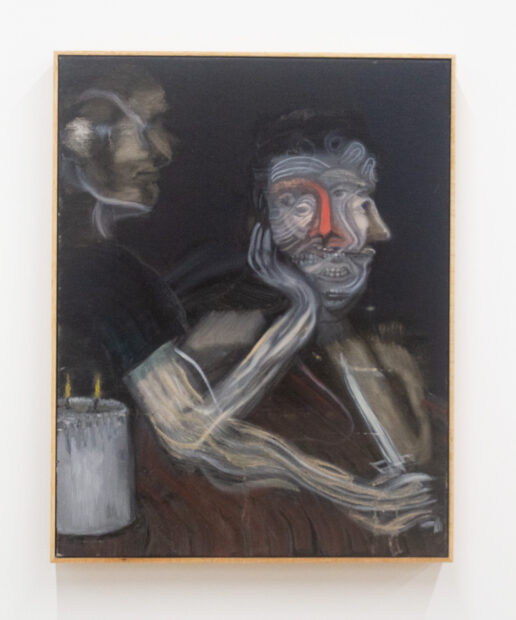 One of Ethan Mertz’s pieces in “Conflicted States,” on view at Cluley Projects

At Cluley Projects, two different couches have been sliced in half and conjoined to evince the experience of disconnection and imbalance. Erica Felicella, seated upon the couch, gave a spoken word performance to the crowd filtering into the gallery on the show’s opening night.

It is okay to not be okay

It is strength to fight and ask for help

We should talk more about mental health

The performance is a part of Felicella’s Dichotomy of Reality series, in which Felicella offers photographic prints of scenes which illustrate the extremity of coping amid episodic illness.

The paintings in the show by Ethan Mertz, by comparison, are sloshy depictions of mania, euphoria, and the state of delirium.

“The thing about my works — when I first do them, I don’t know who they are, but after two months I may see striking similarities to people from my past. I like to stare at my paintings after I finish them. After a while I might see, wow, I might be painting a person that I know or someone from my past,” said Mertz. He continued:

“It’s not always faces, sometimes I like to expand my subject matter. Right now I’m trying to figure out how to put the faces into certain environments — for the euphoric faces, I want them to be in an explosive environment, and I want the dyspeptic faces to be in a kind of (contracting) environment.” 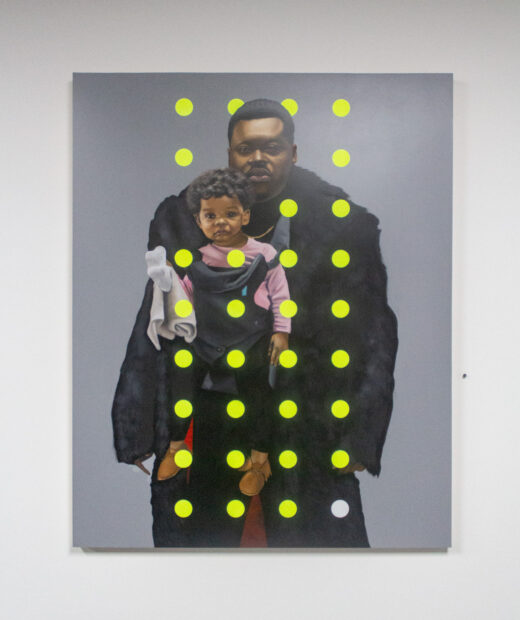 One of Jeremy Biggers’ pieces in “Presence,” on view at Pencil on Paper Gallery

This new suite of works by Jeremy Biggers continues in his theme of depicting local figures, but this time around his focus is family. Presence features portraits of fathers with their children. In this new series, Biggers will sometimes place large dots in front of his subjects. For these works, they are coded with the colors electric green and white. The entire set of circles represents the father’s age, while the white circles represent how many of those years he has spent raising his child, who is also present in the portrait.

In 2021, Biggers brought the progenitors (all portrait work) of this current body of work to The South Dallas Cultural Center and 500X in Dallas. I asked him how he felt about exhibiting these images of friends and family in a commercial setting, prepped for sale. Biggers said:

“A lot of people tell me all the time, ‘People don’t buy portraits of people they don’t know,’” but that also, “People make pilgrimages to the Louvre every year to see the Mona Lisa.” His point is that no one knows her personally, but they still take the time to meet her. 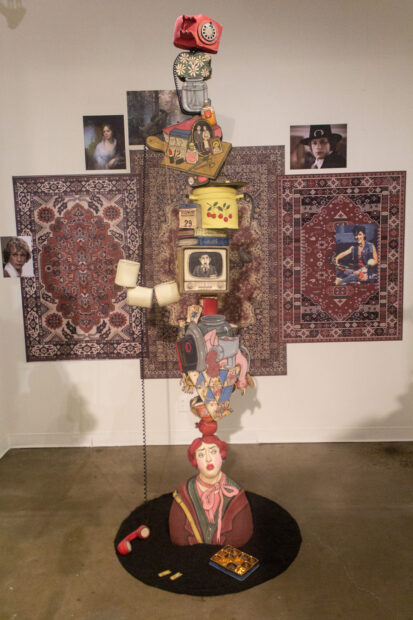 A piece by Yana Payusova in “Weight, Power, Burden,” on view at Conduit Gallery 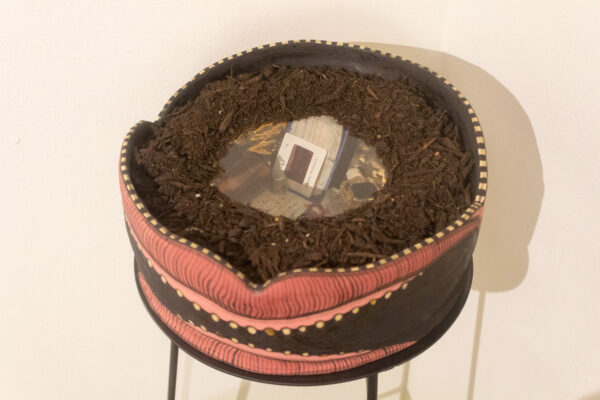 A piece by Yana Payusova in “Weight, Power, Burden,” on view at Conduit Gallery

Two parents and their son trailed into Conduit Gallery at the very end of this show’s reception. The child, younger than 10, wanted to know:

Weight, Power, Burden is comprised of totems of clay, sculpted into objects and soviet-era minutia, and painted to such an extent that they fit somewhere between the definition of sculpture and drawings. The display is presented in a kind of chronology; the female figure on the bottom of the totem matures from a young girl to an aged woman in the three floor sculptures. Payusova says that she used to identify with the aspects of the exhibition that depict youth, but now is more comfortable expressing herself in aspects of age.

The exhibition is a hefty display of things from another era. Electronics, books, and household items, like cookware, delicately hold each other up in a feat of illusion. “I want it to feel like there’s a possibility like it really could stack,” said Payusova. The artist continued describing the presentation:

“Objects have become very disposable. For someone growing up in Russia, we just didn’t have that many things. These objects hold more weight, perhaps they burden as well.” 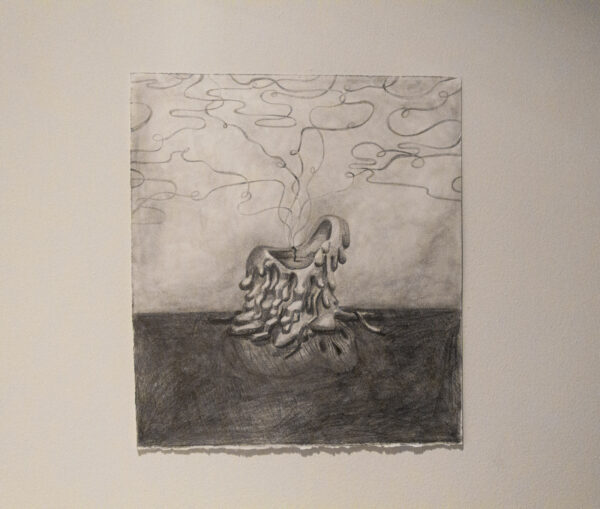 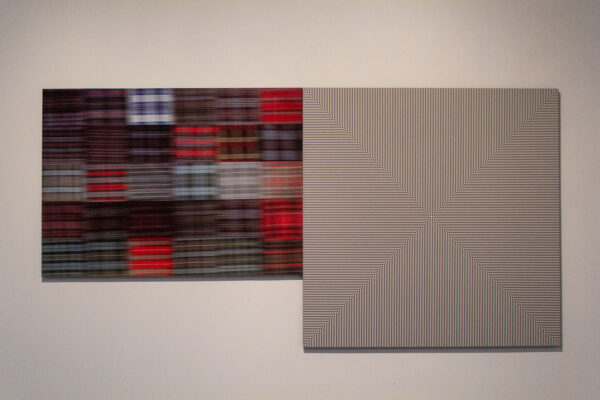 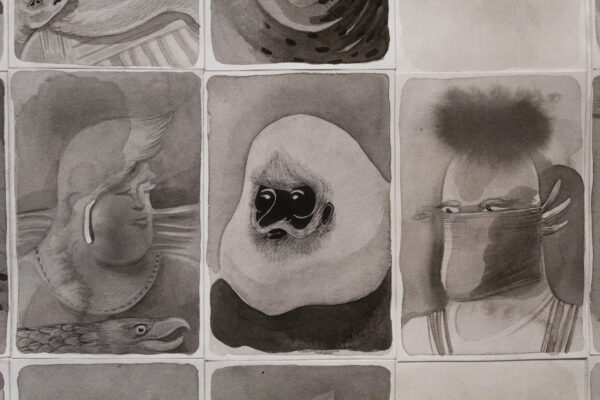 There are many different bodies of work on view in this group show; a packed house of storied painters.

Anticipating my questions, gallerist Barry Whistler produced an exhibition program from Serial Images, dated June 14, 1997. The idea at that time was to think of presenting work by gallery artists as iterative images in a chronological sequence. Now, Whistler has offered not a sequel, but another viewing of the gallery’s roster. Whistler expressed that sometimes, the pieces aligned next to each other resemble frames separated onto the wall.

A panel of drawings by Ed and Linda Blackburn is on view, as planned. Linda died last month, and the show is at least a momentary acknowledgment of her impact on Dallas.

To Remember To Speak Our Mother Tongue, January 7 – February 4, 2022 at the Goldmark Cultural Center. 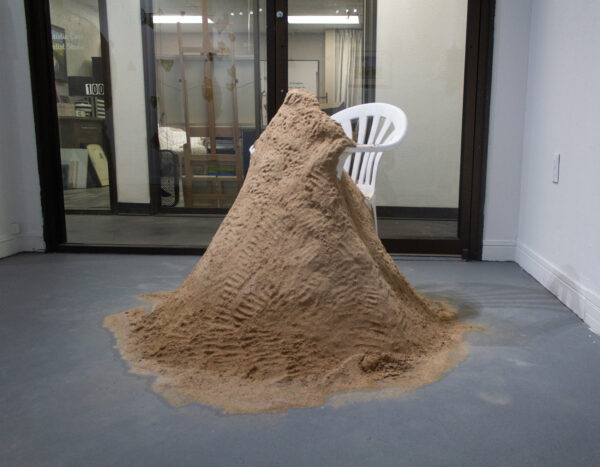 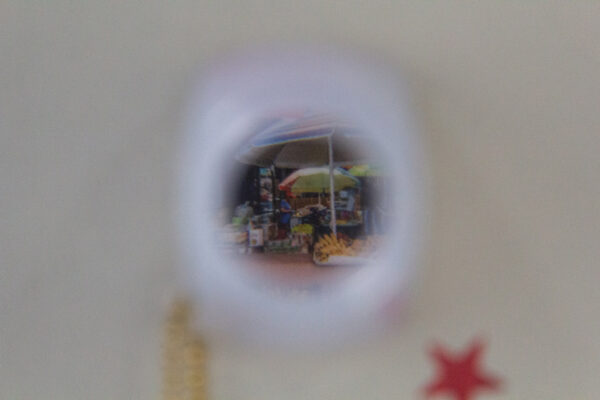 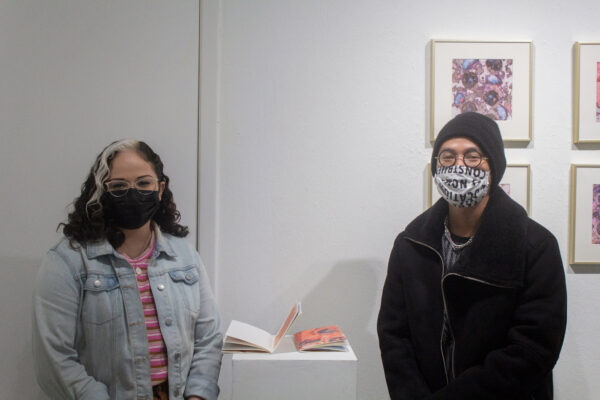 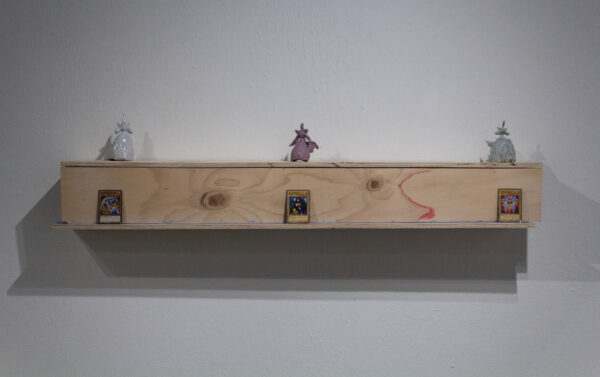 Narong Tintamusik knows how to select a group of artists for a show. At the Goldmark Cultural Center, located on the border of Dallas and Richardson, three artists exhibit work about living near and far. Alongside Usama Khalid’s piecemeal wall installation and Adrianna Touch’s ceramic works, artist Olivia Arratia has created keepsakes which close the distance from here to there.

Arratia has created keychain-sized lupes (a type of magnifying glass) embedded with photos of her hometown, East Los Angeles. She distributed them to her family members who are also living outside of California, and has included a selection of them here. She has also prepared a small chapbook of food photography. Arratia set the remains of her food preparation — such as blackberries, blueberries, lime juice, sugar, and hot sauce — on photographic paper and left it acidify the sheet. She photographed the process with the food arranged, and the result of the paper’s reaction to the acid of the food remains. Arranged in the format of a chapbook, Arratia has slung a mess into a mirage; the acidic stains left on the photographic paper resemble shadows cast by objects that aren’t there.

I was pleased to see Tintamusik engaging with Goldmark’s space As an artist and organizer he has an ever-expanding exhibition repertoire, and the Cultural Center’s uniquely large footprint offers significant affordable studio space in Dallas.

I asked Du Chau, who is involved on the Gallery Committee for Goldmark about how the exhibition came to be:

“I wanted to include an exhibition to highlight the role of people of color. Narong met the criteria as I followed his digital curatorial voice. We have worked on other projects together, and he is straightforward, easy-going, and a good storyteller.”

Of the artists arranged in the show, Tintamusik had this to say:

“I wanted to do a curated group show. I wanted to pick a younger demographic because at our age it’s so easy to get lost in western culture.” 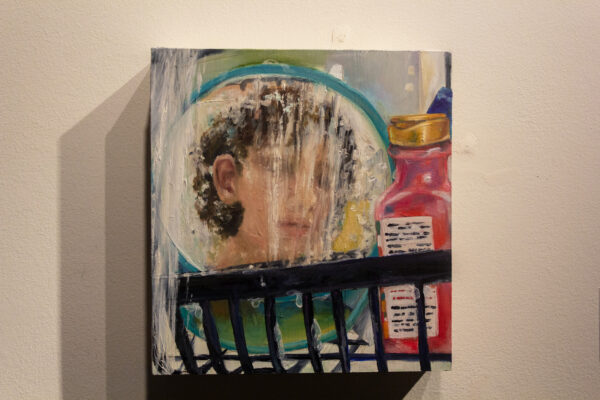 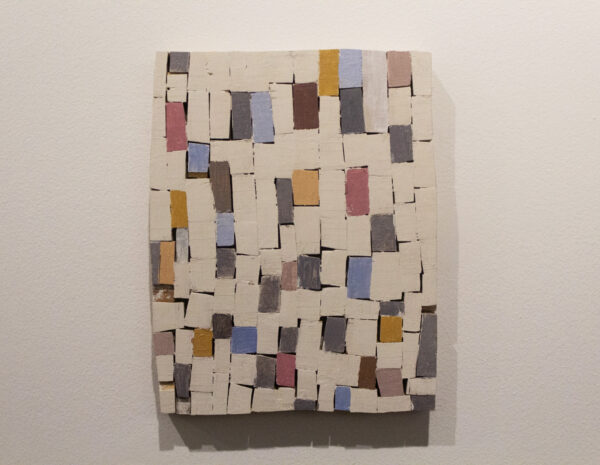 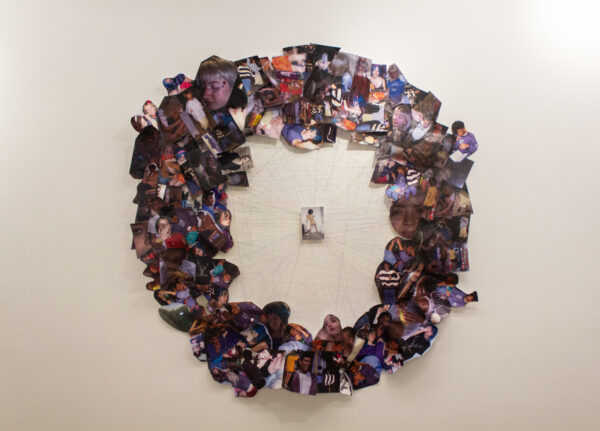 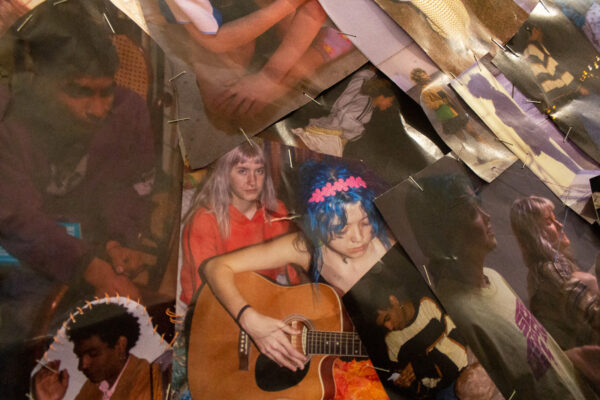 This show of artists, all at the outset of their careers, is an overview of North Texas talent in the making. Marley McMillan’s installation of photographs taken during his first year of school are evidence of young artists living their creative lives in spite of the restrictions placed upon them at this formative time in their careers. The group show is, thankfully, not only wall work or figurative painting.

Gallery coordinator Aisha Haider said of the work that was accepted into the show:

“We were surprised to get as many installations as we did, but were so happy we did end up getting four of them in one show. They’re not all MFAs either, which is nice.” 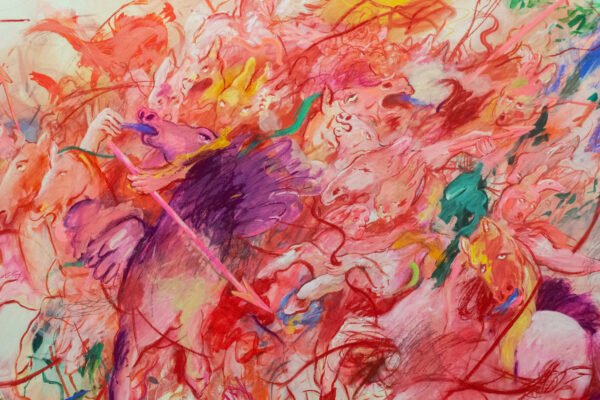 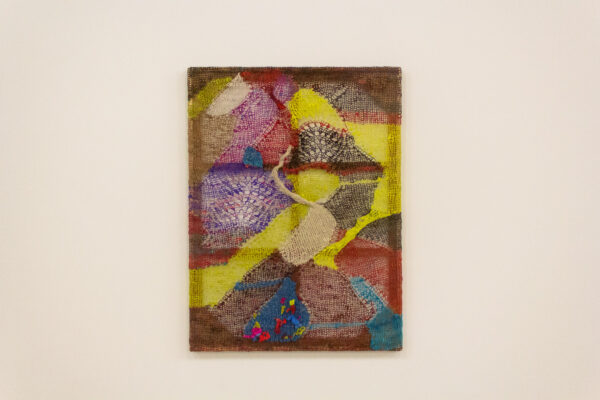 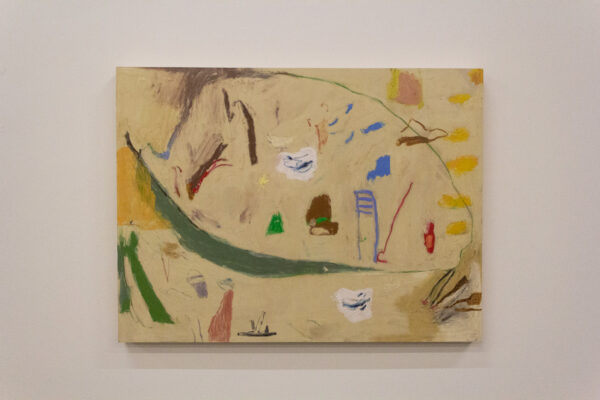 The artwork featured in Abstraction Now is all of a similar smudged ilk, and the mood is something akin to arrest, or being stopped in your tracks. At least, that’s what will probably happen after you enter the gallery and come to Sarah Issakharian’s Storied Cloud. The mammoth painting sits on the gallery’s feature wall, jutting up from the center of the space. In it, a whorl of magenta sentries on horseback prowl onward towards us. Issakharian’s other paintings on view are smaller, and hold a similar composition of swirling figurations.