Lavar Munroe: Zoo at the Edge of the World 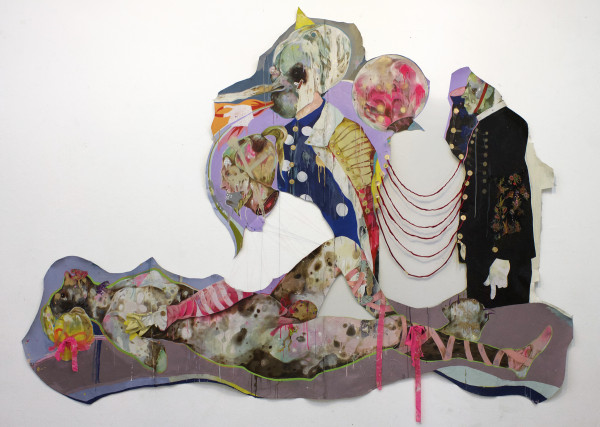 In The History of Sexuality, Michel Foucault wrote that “if sex is repressed, that is, condemned to prohibition, nonexistence, and silence, then the mere fact that one is speaking about it has the appearance of a deliberate transgression.” Although he was referring to sexuality in Victorian times, by this logic, just being any form of opressed “other” can function in itself as a radical, subversive act. In this sense, some people just being who they are—for instance, being black, or gay—routinely challenges the status quo in the eyes of many, by, as Foucault says, “taking on the appearance of a deliberate transgression.” However Lavar Munroe’s Zoo at the Edge of the World: A Continuum of the Exotic, currently on view at Art League Houston, magnifies difference (and questions our perception of it) by splattering it on the wall in a soupy, flowing menagerie of hell.

That’s because the Carribean-born Munroe largely takes inspiration from and is referencing a sideshow phenomenon occurring in the 19th and 20th centuries known as the “human zoo,” as well as the kind of carnival “freakshows” that persisted until very recently. A Victorian human zoo usually consisted of people with physical deformities or unusual characteristics; the ‘freakish’ nature of the human zoo is certainly well represented in Munroe’s gorgeous, complex work. Here he presents a meticulously stylized world where deformed faces and impossible bodies abound.

But human zoos were more than an unfortunate and seriously sick packaging of people who lived on the fringes of society. It was also a way to institutionalize and justify racism. One example of this is Saartjie Baartman, a so-called “Hottentot Venus” imported from Africa whose exaggerated buttocks and other features made her a popular attraction in Great Britain and Paris in the early 19th century. There are clear through lines between Baartman’s objectification and the constant scrutinizing and sexualizing of the bodies of African American women today. People of African descent were often contextualized as primitive; Hottentot Venuses and a Congolese man named Ota Benga were exhibited either in cages or alongside primates, suggesting that they were less than human and instead existed on an evolutionary continuum between a monkey and a man. These examples, framed as “anthropological exhibitions,” helped build the infrastructure of racism that plagues our human legacy, and painful racial epithets slung even today are firmly rooted in the rhetoric created by the human zoo. 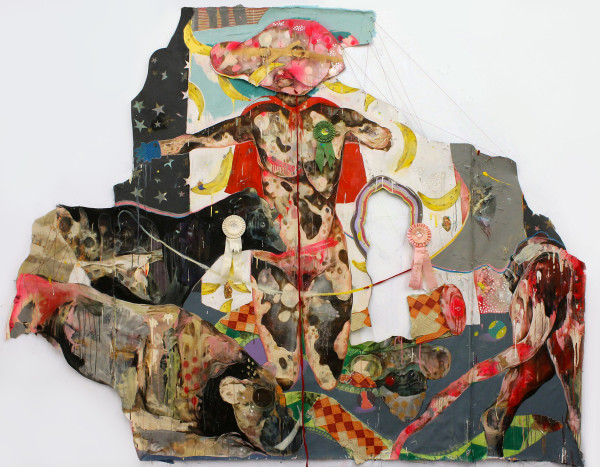 Indeed, Zoo at the Edge of the World is not history painting; Munroe’s work here feels very fresh and reminds us that not only racism, but how we generally perceive the “other” is a specter that perpetually haunts and tortures humanity. He does so by stitching and slamming together symbols and materials, by seductively appealing to our basest desires, and by telling stories that flatten time, making the 1800s feel like yesterday.

Munroe’s painting style is garish but detailed; reckless, and loving. In The Zoo Keeper (2015), a woman’s corpse doesn’t simply lie lifeless—she oozes and pulses with pink ribbon, her bruised, mildewing body birthing a star-skulled child. An alien-headed soldier breathes fire upon her body as a butler with a vacant expression looks on, pointing down into the earth. Similarly, Exhibit (2015) pops with prize-winning cattle traversing a colorful, disorienting landscape. A red-caped, cow-skinned priestess presides over them amidst an array of flying bananas. The red rope dangling from her neck extends to and pools circularly on the floor. Replete with drips that feel sourced from a slaughter house, the entire painting commands tactility and danger: we can’t escape a tantalizing and horrible feeling that one sensuous tug of that rope will rip her throat out.

With paint pooling and dripping and oozing, with characters monstrous and menacing and helpless, Munroe locks our eyes indefinitely, somehow making our very gaze feel as predatory, exploitative, and sadistic as the subject matter itself. 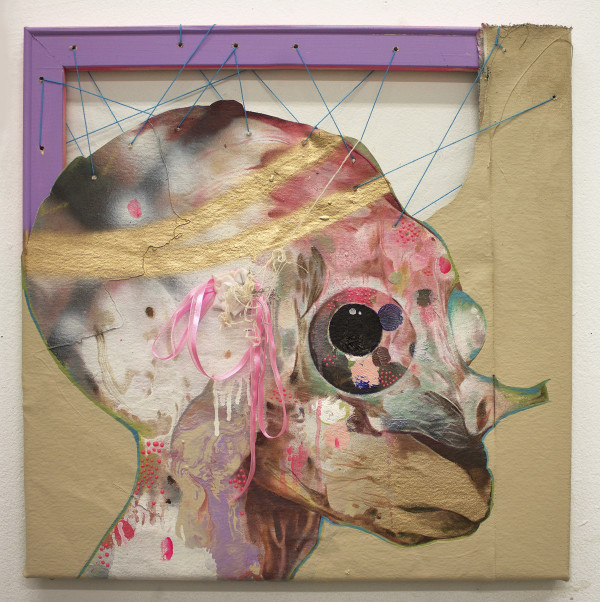 In many of the works in the show Munroe has escaped the traditional rectangular canvas in favor of cutting out various shapes and attaching it to the wall, suggesting that each painting’s silhouette is just as important as what’s going on within the perimeter of the canvas. The silhouettes indeed tell their own stories, and generally speaking, the less rectangular the silhouette is, the more effective. The aforementioned The Zoo Keeper is the most successful, with a sweeping, bell-curved arc that shapes the narrative itself and makes the whole piece feel epic and strangely romantic. By contrast, his Untitled (Animal) series (all 2015) feels boxed in and constipated. Considering the series consists entirely of portraits, the framing makes some sense, but with his subject Munroe does well to make them feel more fungal and amoebic. Framing the portraits cages them in a way that perhaps seems too pedantic, or overly symbolic.

However, more so than the Disney Band-Aids, prize ribbons, or Santa Claus felt that Munroe fastens to his unframed paintings, the portraits on their own do a better job of conveying an unsettling sense of cuteness, and eliciting our empathy. He does this by rounding out the eyes and infusing them with a glint of naïveté that makes them appear helpless and unknowing. This is where Munroe’s brilliance makes itself fully known—he transitions so seamlessly between the cute and the grotesque that we simply cannot stop staring, and we might become disgusted at our very desire to stare. And this is ultimately how Lavar Munroe makes the inhumanity of a distant past relevant to now. Just as we cannot escape a predatory impulse of looking, we still cannot escape the impulse to cast somebody as the other.

Lavar Munroe’s Zoo at the Edge of the World: A Continuum of the Exotic is on view through September 12, 2015 at Art League Houston.