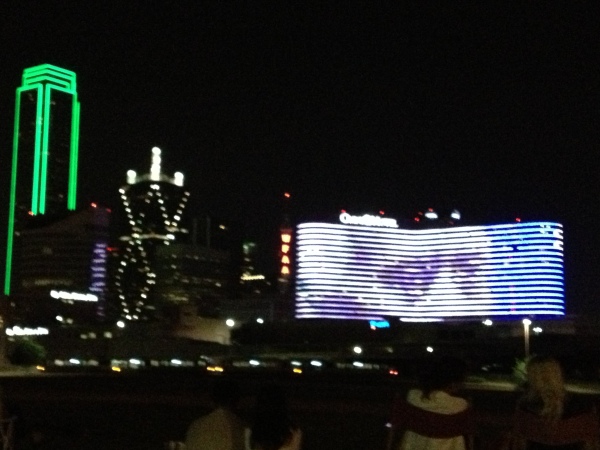 Dallas VideoFest’s artistic director Bart Weiss continues to reinvent the annual event. For its 27th year, the festival spanned two complete weeks held in five different venues throughout Dallas, and this strategy (as opposed to all the screenings in one venue) evidently draws upon different audiences and boosts overall attendance. A possible disadvantage is the lack of a singular community. I missed hanging out with the filmmakers in between screenings.

This year, artist Jenny Vogel curated the Expanded Cinema event under the theme “Mirage.” Ten artists created short videos that wrapped around the massive Omni Hotel’s exterior, and KXT 91.7 played the artists’ audio soundtracks in sync with the videos (no small feat). I always look forward to this free outdoor event (this was its third year), but I would like to see credits. Given the abstract nature of the large-scale projections, I didn’t have any idea whose work we were viewing. 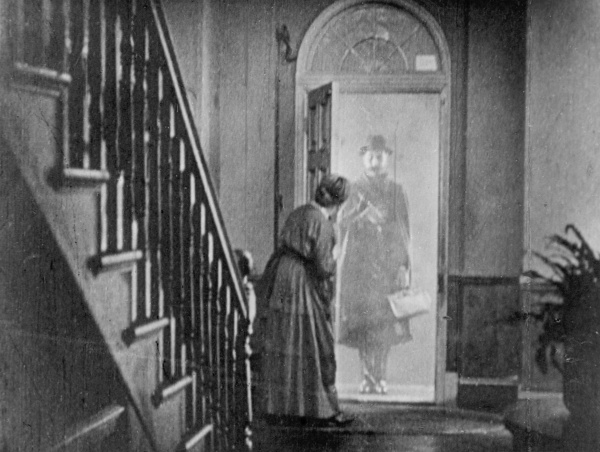 After last year’s opening night spectacle featuring True Tales, a documentary about 1960s Dallas burlesque performer Tammi True followed by a live burlesque show by the Ruby Review, I didn’t think it was possible to create a more memorable event. This year Alfred Hitchcock’s 1927 silent film The Lodger was screened to a packed house at Dallas City Performance Hall. Academy-Award-nominated L.A. composer Douglas Pipes created an original score performed live by the Dallas Chamber Music Symphony—it was suspenseful, emotional, and even humorous—and it was masterfully played. It was a terrific event. 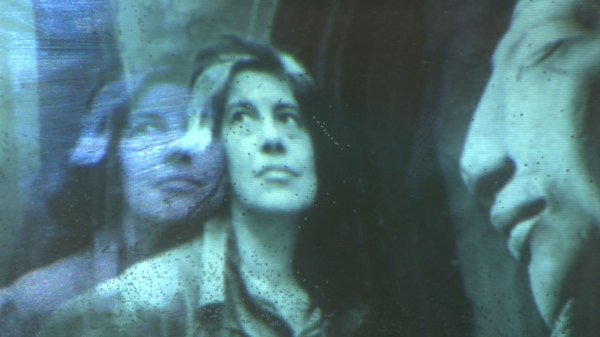 A highlight was the feature documentary Regarding Susan Sontag directed by Nancy Kates; it explores Sontag as a theorist, writer, mother and lover. Combining experimental images with archival footage and interviews with people who knew her, the film juxtaposes personal anecdotes with Sontag’s ideas, and in it Patricia Clarkson reads some of Sontag’s writing from her journals and essays. Instead of deifying Sontag, the footage exposes some of her insecurities around motherhood and her inability to successfully balance a personal life with her professional one.

Another highlight was Jennifer Reeder’s short narrative A Million Miles Away. It’s billed as a coming-of-age story, but it’s more complicated than that as the young female actors project the familiar struggle and angst of teenagerdom. One girl’s soulful rendition of Madonna’s Like a Prayer was heartbreaking. 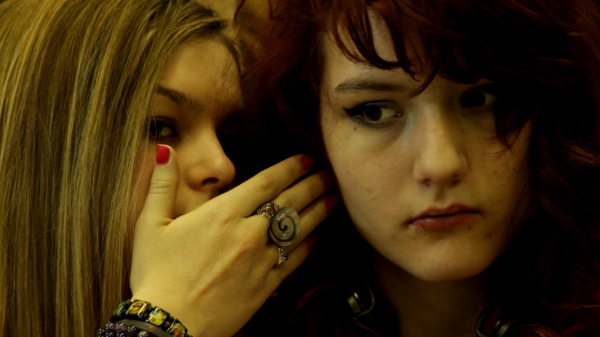 A Million Miles Away

A new addition to the program was a collaboration between the Video Association of Dallas and a storytelling collaborative called Oral Fixation. Seven filmmakers were selected to create original videos inspired by the stories of seven storytellers. The storytellers performed their stories live with the videos screened behind them. With the exception of one story that didn’t quite resonate with me, the collaboration was a success; the stories were powerfully performed and explored defining moments of love and loss in people’s lives. These included a near-death experience, oppression experienced as a gay youth, negative body image, a seriously strange first date, and a childhood prank gone wrong. A couple of the videos came off as a bit too literal, but I hope this will become a regular event at DVF. 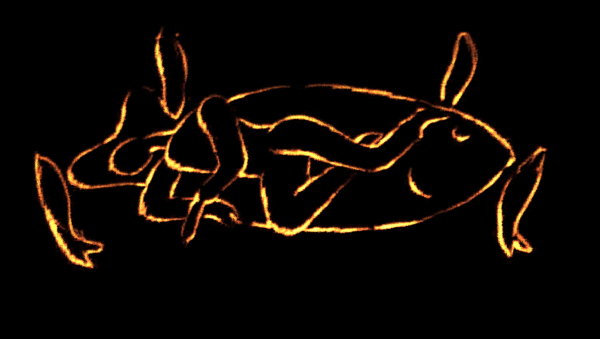 Day of the Bleeding Gums

Another new addition to the festival—an impressive one—was a shorts program called Big D Mobile; DVF put out an open call for video shorts made with smart phones. Phone video technology is so exceptional now that, with the exception of a couple of entries, it wasn’t evident they were shot on a phone. Filmmakers Ronni Hummel and Simon O’Neill both used the phones’ vertical framing to good effect: Hummel’s short documentary about bullying uses the phone as a casual interviewing device to put the kids at ease; and in Tell Me About Yourself, O’Neill employs the selfie and easy email distribution as a self-reflexive tactic in playing an actor attempting an audition. Bulgarian animator Dimitar Dimitrov creates a minimal but powerful hand-drawn animation called The Day of the Bleeding Gums. My favorite was probably Laura Birek’s Glen Etive, shot on location in Scotland about a family picnic that goes awry. The special effects were unexpected and funny and there’s a twist ending. 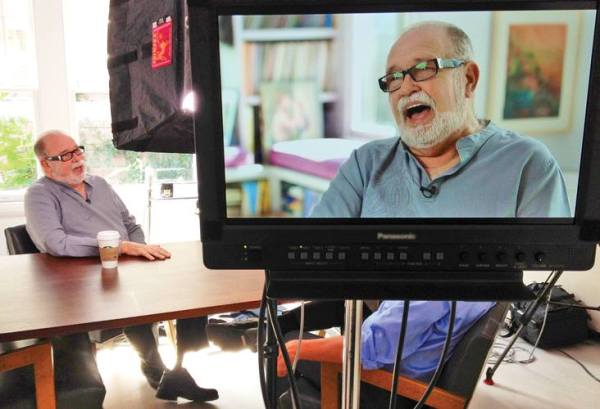 The Trouble With Ray 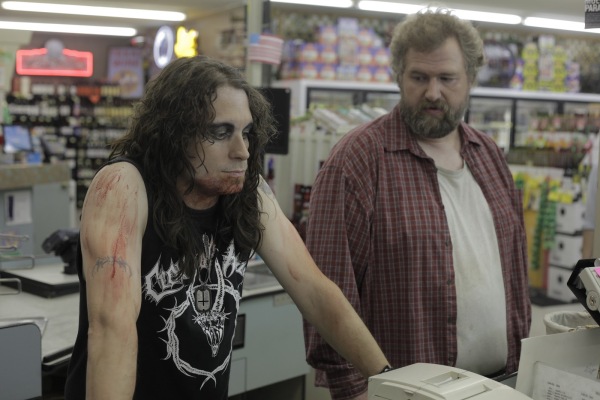 Most of DVF’s programs are arranged by theme,  but an exception was the Houston Film Commission’s Texas Filmmaker’s Showcase. The five shorts included a music video animation, two documentaries, and two dark narratives, and the mix worked. Jarrod Gullet’s The Trouble with Ray (winner of best short documentary) celebrates Ray Hill’s forty-year career as a gay activist (who also happens to be a great storyteller); Brandon Ray and Pat Kondelis created the animation Anything Made of Paper for a Bill Carter song (of the same name) which was written for Carter’s friend on death row. The two narrative films were subversive: Kat Candler’s Black Metal shows a heavy metal musician’s struggle with guilt when he learns a teen’s killing spree was inspired by his music; and Todd Rohal’s Rat Pack Rat was seriously disturbing, but my students and I agreed that it was the selection of the festival that most stayed with us. The title is a play on the familiar Rat Pack (Frank Sinatra, Dean Martin, Sammy Davis Jr. and Peter Lawford), and the film’s mother character who is a pack rat, who hires a Sammy Davis Jr. impersonator to cheer up her terminally ill son on his birthday. Check it out on youtube: https://www.youtube.com/watch?v=m101Q9uOYh0. Sundance gave it a special jury award for “unique vision”.

My one regret every year is that I don’t have time to see everything, but it keeps me looking forward to next year’s installment.