A Ghost in the Shell: Michael Morris’ Black Boxes and Dark Rooms 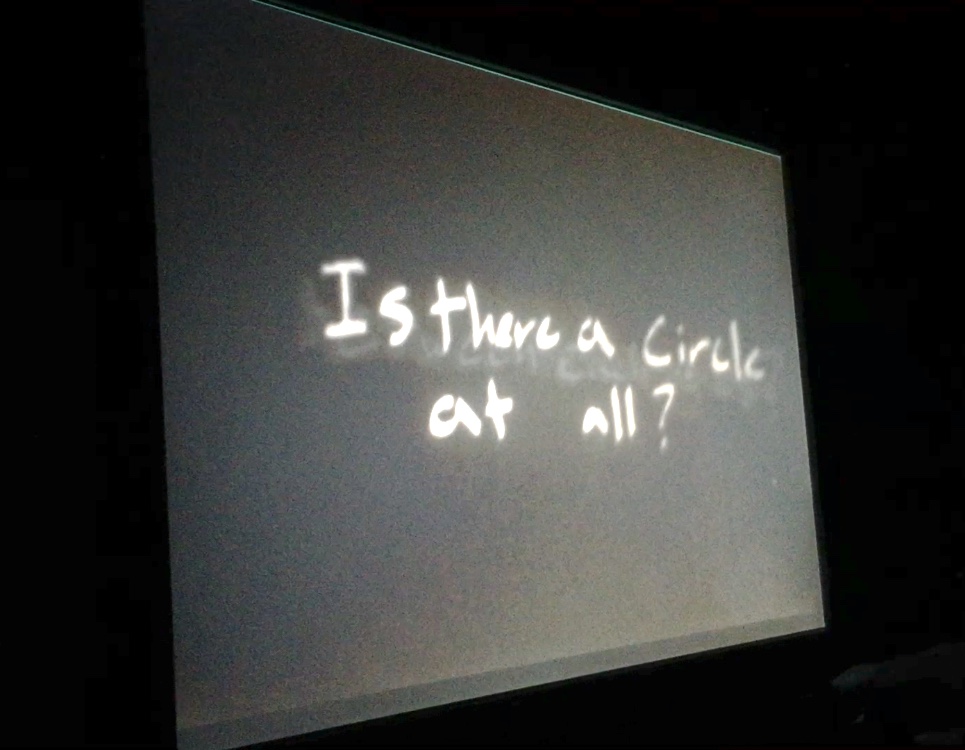 Michael Morris wants to talk about hermeneutics. Hermeneutic circles to be exact. This method, by which a viewer interprets works and texts, requires the filter of the viewer’s own historical context for fully understanding the art, which in turn happens through contemplating each of the works’ separate parts. It’s a personalized breakdown-and-analysis approach, which happens less frequently today.

Twentieth-Century German philosopher Hans-Georg Gadamer (and Morris’ personal icon) focused on the notion of hermeneutics; he believed an author should not hope to impart sweeping truths through the work. For the audience, the truth is only possible to acquire via a meaning they determine themselves.

Morris’ current work, Black Boxes and Dark Rooms (which started at Beefhaus in Dallas and moves to another Dallas location for its closing this Friday*), focuses on the limits of textual interpretation. It also serves as a culmination of Morris’ work from the last several years, during which he taught himself to code, a skill on impressive display here. “I wanted to consider all the different ways this [hermeneutic] work might engage with Darkness,” he explains, finding agency through the lens of cinema, which he sees as a communal hallucination shared in darkness by means of the black box-slash-projector (or Arduino or tube TV monitor).

Beefhaus’s typically lit and inviting atmosphere is gone, replaced by an inky madhouse. Windows blacked-out and strewn with wires, the dinge is punctured by various intermittent light sources. The gallery’s rooms reverberate with a sputtering, feedback-induced clatter punctuated by the steady distant chime of an organ—as if Bela Lugosi himself has grabbed a chair in the back to join in the din. 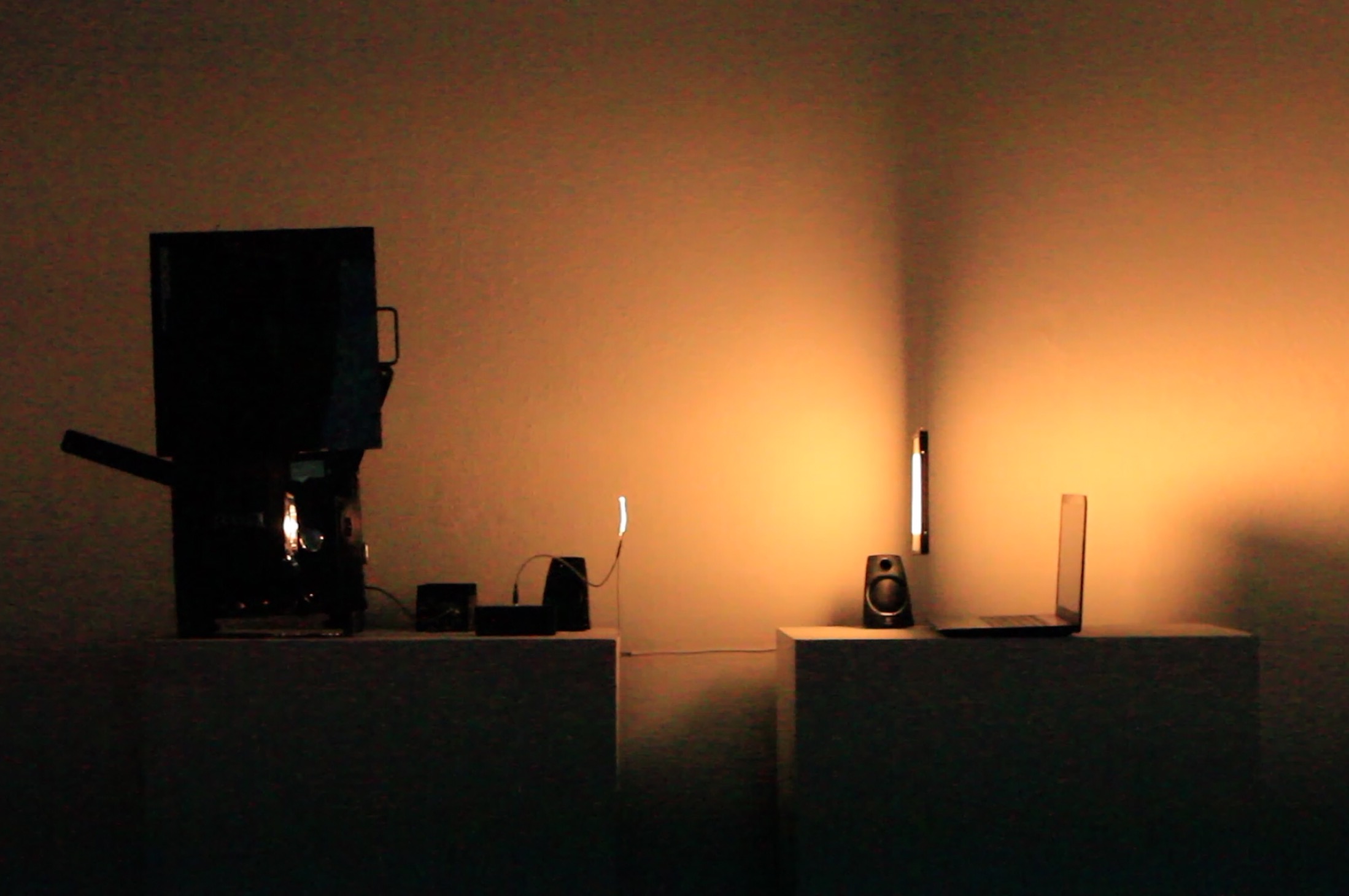 Morris’ Epistle (to Jenny Vogel) exemplifies the elaborate, almost comically tech-heavy nature of Black Boxes. An Eiki 16mm projector casts a film reel of black-and-white frames, patterned by Morris into Morse code sequence, onto a small free-hanging screen. It evokes the avant-garde imagery of Tony Conrad or Paul Sharits. These frames are captured by a laptop webcam, displayed onscreen, and were even broadcast on YouTube at the opening. Morris readily admits this feature performs essentially as a void no one will bother with.

A Raspberry Pi and Arduino work in tandem to synthesize these light impulses into sound, emitting a steady drone with irregular, Morse-like blips that warble and deteriorate, then gather back into one unified pitch. This cryptic message is decoded in Morris’s adjacent piece, Hermeneutic Circle, as a poem—an epistle for his mentor and frequent collaborator, New York-based artist Jenny Vogel.

Like a stone skipping across a pond, the emerging text of Hermeneutic Circle is magnified and distorted as stanzas ripple and dissipate. Morris’s preeminent film is a feedback loop. Slides bearing text are projected onscreen and recorded by video camera. A digital signal is fed into a Mac mini, interpreting analog information both visually and sonically as blobby, amoeba-like spread. “One Day Those Lights Will Go Out” stands out, suggesting a comfort with cynical inevitability. Other lines index related pieces in the show, including Epistle, Magic Circle, and Negative Theology. 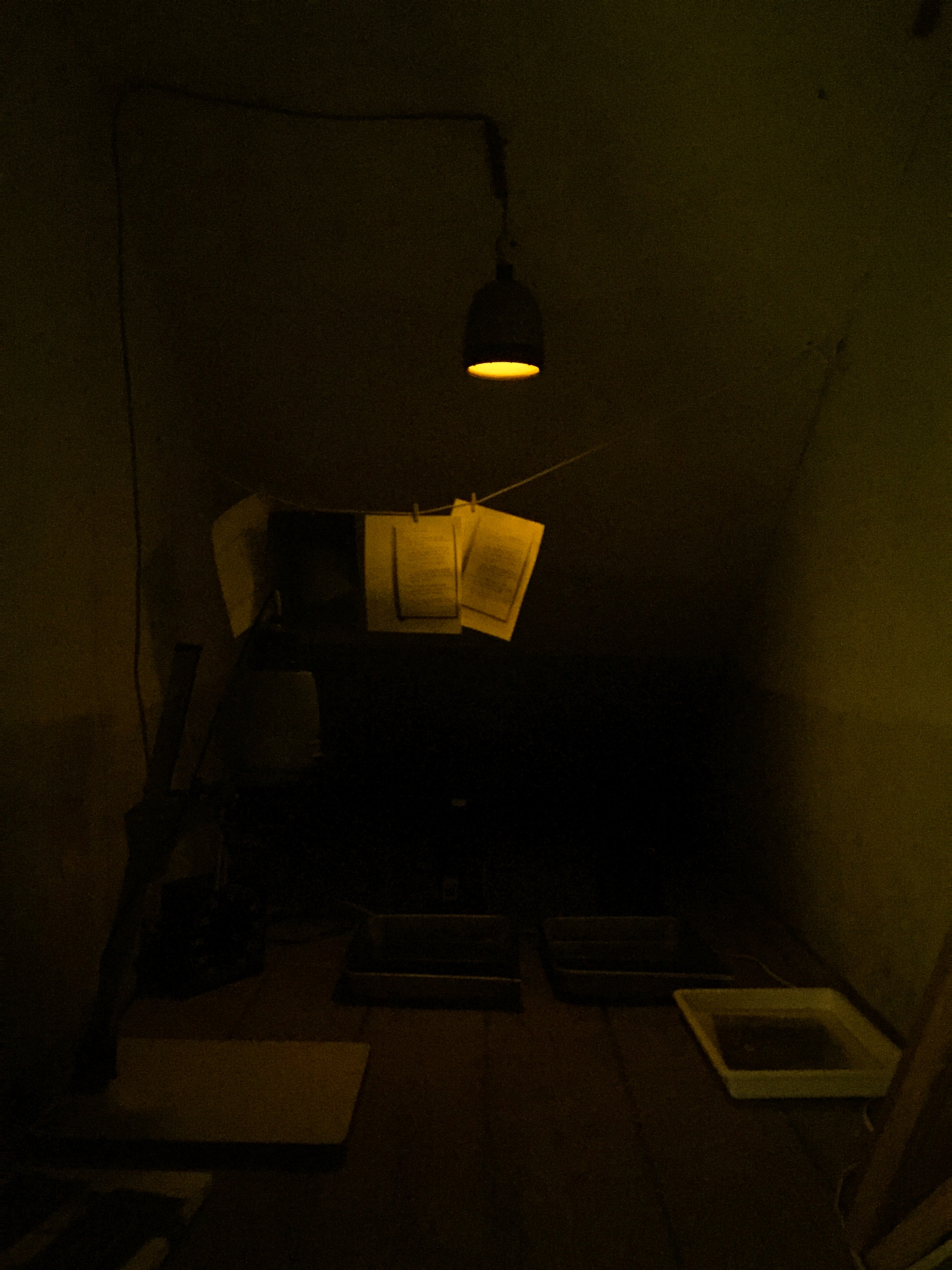 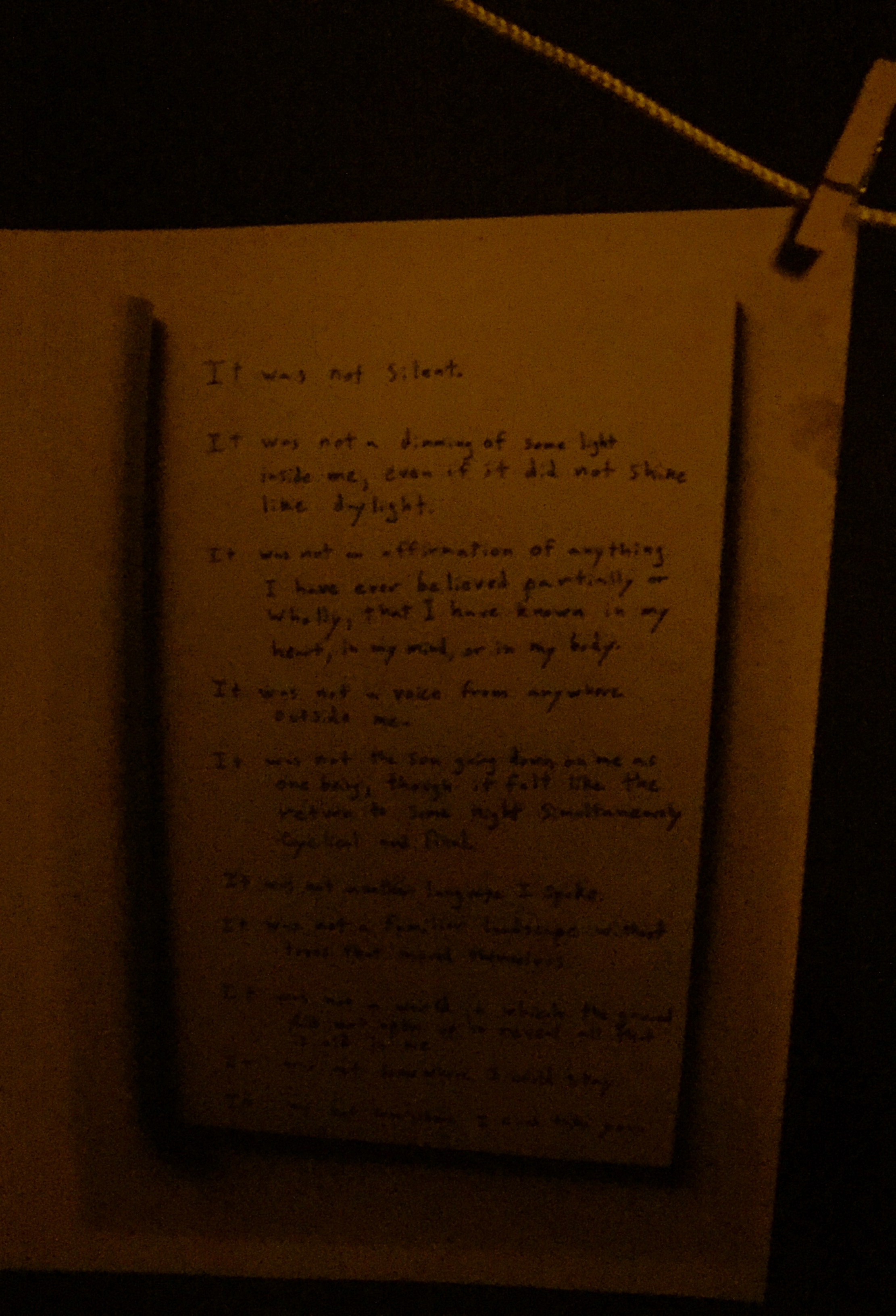 Negative Theology’s darkroom turns Beefhaus’s space under the stairs into a functioning lab; developing photographs reveal prose rather than imagery, in which Morris seeks to negate “…a set of ineffable experiences I’ve had in the past. Either spiritual or otherwise indescribable, the text tries to get at them through what they were not.” Morris watches the chasm between texts’s authorship and the present moment when a new reader discovers them. He positions a light to sap words from the dark. 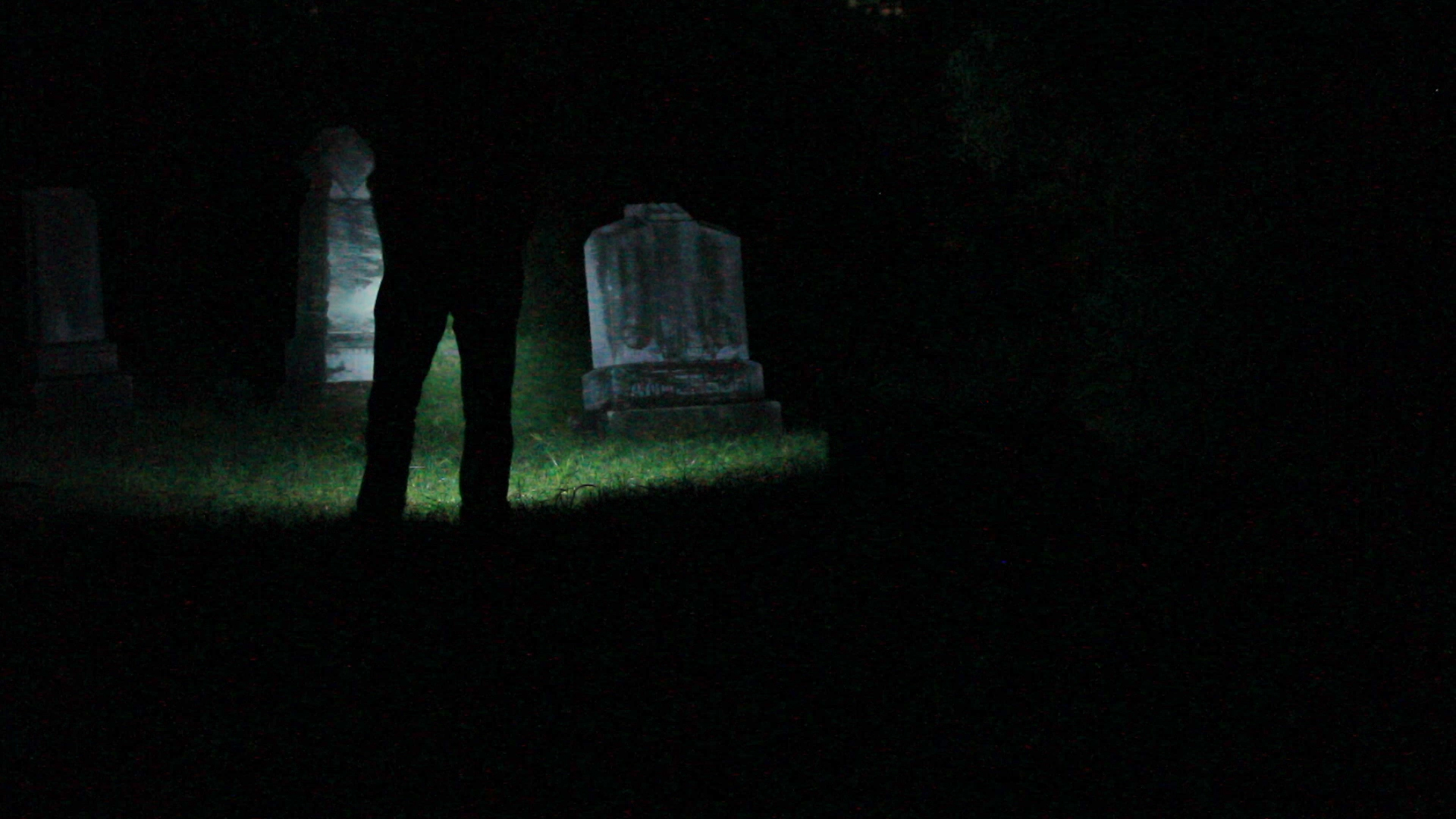 In Sitting Alone in the Dark, an 80-minute film, a flashlight glides over the interior of a movie theater, cast across seat-backs and screen, allowing the viewer inside Morris’ discomfort with the dark. It shows him alone in four separate regional locations, introducing the show’s playful relationship with the occult. Each location comes loaded with its own inherent Darkness. Morris bumps around in the Texas Theatre, steps cautiously in Oak Cliff Cemetery, and lingers in his own bedroom that his partner swears is haunted. He travels 60 miles south to a field in Hubbard, Texas—a place considered one of the darkest in Texas by stargazers. Crickets chirp.

Despite the show’s theme, only the Fourth Hermeneutic requires direct viewer interaction. Initially intended as an online experience riffing off the isolation of cinematic experience, Beefhaus’s safe room is converted into a solo viewing booth. A monitor displays a text-based film that’s manipulated via one Playstation thumbstick affixed to another Arduino box. Some movements affect brightness and clarity levels, others zoom in and out.

It’s from this piece the eerie organ chord chimes, an aural beam pulling visitors into the maw black of the booth. A computer program shuffles the prominence of individual notes in the chord depending on the direction of the viewer’s thumbstick. Accompanying texts come and go as viewers attempt to make sense of it all, pulling words out of or pushing them into the void. It’s hermeneutic manipulation at your fingertips. 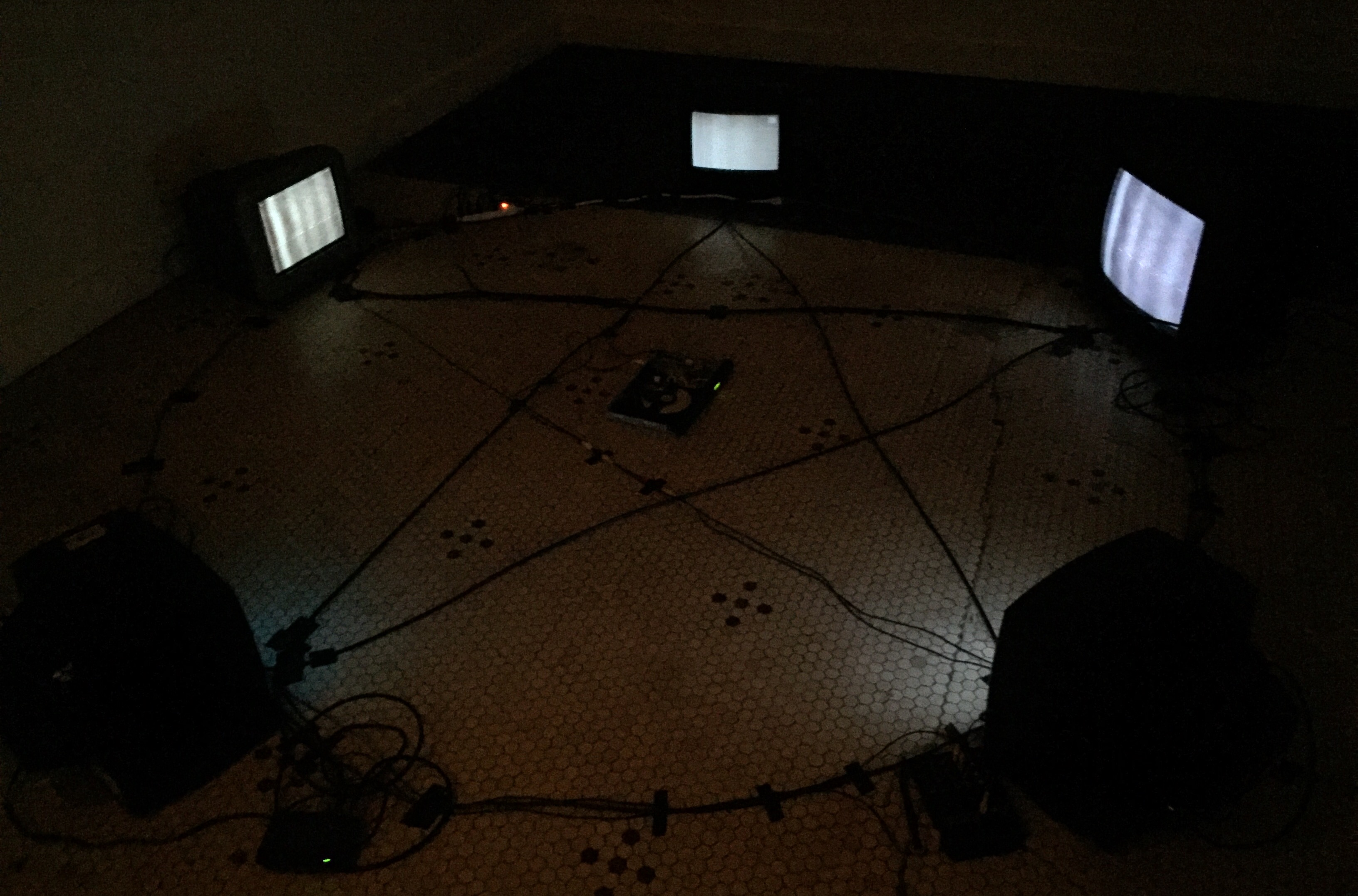 In Magic Circle, prior hints at the occult are made overt. Five cathode-ray tube monitors form a circle around one central DVD player removed from its housing. Each monitor displays an increasingly degraded analog signal replete with poltergeist-y flickering white static. Five cable-connected points form a star in a stunning centerpiece to the show—a talisman with the purest intentions. “It’s an idea maybe others have thought better of,” Morris jokes. Fearing an association with Slayer, he is adamant about the protective qualities of the circle: “The pentacle is all about creating a safety barrier between the caster and whatever dark force is conjured. I’m approaching it from a post-humanist perspective where we can think of the world as indifferent. It would realign in another balance without us.”

In spite of its subject matter and tone, there is no pitch-black heart to be found in Black Boxes and Dark Rooms. Instead, we’re offered a serene, absurdist-lite take on the banal that asks audiences to come as they are and unpack as they please. This show finds its devil in the details—a tech-savvy set of separate, discreet systems that coalesce and expand long after viewing, leaving behind an intricate and humble triumph.

*Postponed due to the Dallas police attack, Morris will now bring this hermeneutic discussion to a close at Church in the Cliff on Friday, July 29th with a screening of his Hybrid Cinema: Films, Videos, and Expanded Cinema. Go here for info.

One Of the Smarter Pieces In Dallas This...