by Lucia Simek May 22, 2014
FacebookTwitterEmail 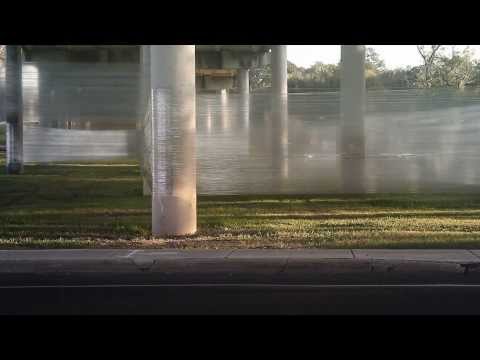 This has been the year of public art in Dallas, what with the massive Nasher XChange program that sited ten commissioned art works all over Dallas, the big to-do over the slated removal of a work by Frances Bagley and Tom Orr in White Rock Lake, as well as Art Everywhere, the upcoming billboard show of famous images as selected by the public and presented by some big-wig museums.

Highlighting this trend in exhibiting temporary artwork in public as a way of creating civic engagement, over the last year Austin has showcased emerging artists who work with unusual materials in parks throughout the city in a project called TEMPO. Two of the six participating artists have been nominated for the Austin Critics’ Table Awards in the category of “Work of Art: Independent or Public Project”: Albedo by Mason Leland Moore and Joel Nolan and i see you/you see me by Autumn Ewalt.  Albedo was an plastic-wrapped underpass and I see you/you see me used 1000 LED lights to recreate the mating rituals of fireflies. The Critics’ Table winners will be announced on June 2.

Los Angeles Nomadic Division (LAND) is also bringing their Manifest Destiny billboard project to TX this fall. Sites along I-10 will include Beaumont, Houston, San Antonio and West TX (if only Marfa were situated along the interstate…)