Via the San Antonio Express-News: a public art sculpture designed and built by a UTSA students has partially collapsed in its park location, either from wind, or being climbed on. It’s cordoned off by caution tape until student builders can be recalled from vacation to repair it.

The 40-foot long, 15-foot high spiky dome, titled “F2” was conceived and built by architecture grad students at the University of Texas at San Antonio as part of a class on the fundamentals of parametric design. Their teacher, Lecturer Kevin McClellan, stated that the project was completely student run with his help as the supervisor, along with architect Andrew Kudless. It was unveiled at Travis Park less than a month ago. 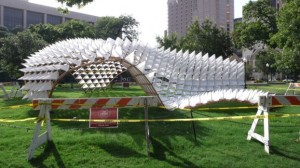 The sculpture is meant to be the first of such projects planned for Travis Park’s “Art in the Park” program initiated by a branch of the city’s development office. (If I had not heard this news I would not have guessed the sculpture was caved in just going by the pics; its new shape could easily have been deliberate. But it really wasn’t, so there’s that.)