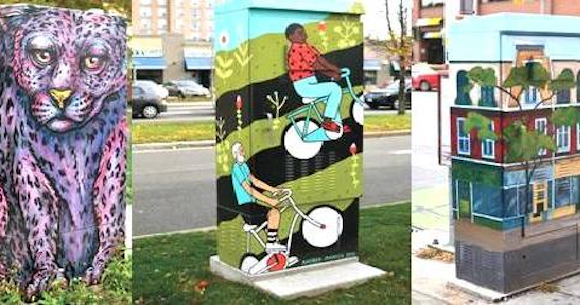 Apparently, the city of Grand Prairie (in the Dallas–Fort Worth metroplex, population 175,396 according to the 2010 census) does not read Glasstire. At least they didn’t read or disagreed with Rainey Knudson’s recent article “Please Stop Painting The Electrical Boxes (A Public Art Proposal).” The article garnered tons of comments, both pro and con.

Grand Prairie, though, is full steam ahead on the concept. “It’s a great way to bring art to the community,” said Public Art Coordinator Tammy Chan. “You know, in Grand Prairie, we don’t have any official galleries or museums…So we’re bringing art to the neighborhoods.” The Dallas Observer reports that Grand Prairie has put out a call for proposals to Texas artists to paint 20 traffic signal boxes. The deadline has passed, but the city will announce the winning artists later this month.

Hey, with a $2k cash award for each box, at least the winning artists will make some money. It’s a rare artist indeed who would turn down that amount of cash, and usually only someone who doesn’t have to worry about money and things like paying bills.

Houston pays $1000 (including materials stipend), so Grand Prairie is paying well for this kind of thing.

Grand Prairie is the type of place that can do these simple, low budget projects. Not Houston or the like……..

Good job on the self back patting Glasstire. This article and the other one related are the kind of writing that alienate those who might take interest in visual art that don’t already do so.

Actually, I did read the original GlassTire article and posted a comment about it in the original article. Grand Prairie has both a Percent for Art (2%) and Percent for Streetscaping (6%) Program and we have some really great – and meaningful – art. Here’s a link to a YouTube video about a National Endowment for the Arts project we did that combined job training for ex-offenders with The installation of a 233 ft-long recycled glass tile mural along I-30 in Grand Prairie. https://youtu.be/X-kJ8lG4nEU. I would love to give you (anyone) a Grand Prairie Public Art tour. Please contact me at [email protected]. Thanks! Tammy Chan, City of Grand Prairie Public Art Coordinator.