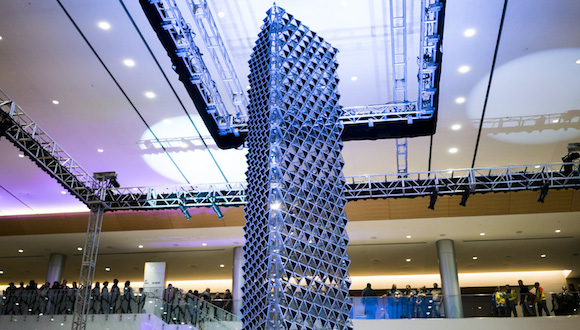 Last year we reported on the opening of Liquid Crystal, a sculpture created for San Antonio’s Henry B. Gonzalez Convention Center by London-based Jason Bruges Studio. The sculpture was almost universally panned as an expensive piece of high-tech fluff from a design studio, and has come to be known locally as “the cheese grater.” At the time of the work’s unveiling, City Councilman Joe Krier claimed that he and others were standing looking at the work mouths agape, “frankly waiting for something to happen.”

Now Krier has his art critic hat back on: as reported in the San Antonio Express-News, he recently produced a slideshow of “questionable” public commissions in San Antonio, saying “that ain’t art to me,” and suggesting that the city should select more “aesthetically appealing” works created by local artists. Krier’s critique came as City Council was preparing to vote on a list of 135 artists that would be pre-qualified to win commissions. While 82 of the artists on the list are from Texas (with 59 of them being from San Antonio), Krier wanted to force the city to reduce the number of out-of-state and international artists.

Krier’s colleagues opposed this sentiment and the list of artists passed. Good luck to any of those 135 artists who get chosen to produce artworks. There’s a wannabe critic (artist?) on the Council who’s paying attention.

Getting to Know Dixie Friend Gay

Donald J Krier has a future in defense contract waste. Let’s see if DJT will get San Antonio’s Krier, Dallas’ Fire Marshal Christopher Martinez along with Houston’s Kubosh, Stardig and Gallegos all to head a department.

How much longer? They will never stop artists from making art, but they sure will make a bunch of us poorer.

if you don’t notice public art, that may be because it’s become, predominately, design enhancement.

Under our noses, civic art has been grossly micromanaged. There are public art programs throughout the state that have the illusion of transparency and level competition. this isn’t because the public art managers or administrators don’t care about artists, it’s because they follow a policy and usually abide by contracts that allow city department heads or directors to have final right of refusal over what projects can be and even what artists get selected. It has even got so bad that these city/municipal directors will even meddle after artists are selected and decide what that artist/contractor can make, i.e. painting sculpture installation etc.

This system appears to hold art money hostage because if art administrators don’t follow protocol, then these larger dept. directors or managers will find loopholes to not stay within the city ordinance. Meaning, they will work within their power to legitimize not having to comply with the ordinance (% for arts). Which is funny, because it’s not like it is their personal money, it is the public’s tax money or HOT tax, depending on where this hypothetical city is drawing their funds.

At the end, it appears these directors one: don’t care about art at all and feel that they can bully it or two: they’re given an absurd amount of authority and power, and they’re abusing that. They look at art as a risk. They also think if they don’t make everybody happy or allow them to just walk by and not complain, that they’ve not done their job right. Not everybody has to like everything they see, good art should make certain groups of people feel challenged.

Do you want to know why the GRB commission was important? It wasn’t because the art or the artist, it was because the art community came together and implemented change. That is the thing that we should’ve all taken from that scenario, your voices are strong and even stronger in numbers. Although we enjoy gallery openings and going to museums, public art important now more than ever. It is an interruption of our banal visual lives- when at its best.