Is there a pattern of city council members dissing public art? We recently reported on the Houston City Council’s problem with Ed Wilson’s $830,000 commission at the George R. Brown Convention Center. Some council members emphasized the symbolic significance of Houston’s airports and cargo ports, perhaps implying that Wilson (or some artist) create a commission that matches their idea of the city. 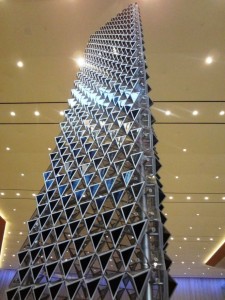 Similarly, at the beginning of February, San Antonio’s Henry B. Gonzalez Convention Center unveiled a new $1 million sculpture, Liquid Crystal, by London-based Jason Bruges Studio. Consisting of 3,510 LCD interactive panels, the 30-foot-tall sculpture is inspired by San Antonio’s River Walk and funded by San Antonio’s one-percent ordinance, passed in 2011 to dedicate one-percent of a capital project’s budget to public art. Some San Antonians, however, are not happy about the price tag of the new work. City Councilman Joe Krier spoke out against the sculpture and gave his first impression of it: “I and others were standing with our mouths open, frankly waiting for something to happen.”

And the San Antonio Professional Firefighters Association used the commissioning of the new sculpture to criticize City Manager Sheryl Sculley, saying “this is just one of many reasons why Sheryl Sculley says she can’t fix your potholes.” (The funds used to commission the sculpture are not part of the city’s general fund and can’t be used to fix potholes.) Some San Antonio residents have been poking fun at the sculpture, calling it a “giant cheese grater.”