Joyful Crowds at Unveiling of Tejano Monument on Capitol Grounds 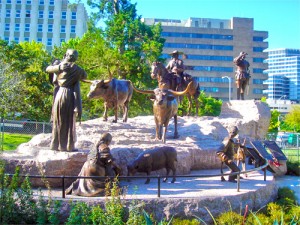 A bronze and granite grouping by Laredo sculptor Armando Hinojosa depicting a vaquero, two longhorns, settlers, a conquistador, and a boy roping a goat was unveiled amid festivities at the Texas State Capitol grounds on Thursday. The Tejano Monument and the joyous sense of inclusion it symbolizes is the result of a 12-year  campaign to enlarge the Tejano presence among the Capitol’s collection of statuary, which included volunteer firefighters, the Heroes of the Alamo, Terry’s Texas Rangers and Confederate veterans, but nothing about the state’s early heritage. Apparently it’s bronze vaquero season in Texas: David Newton and Tomas Bustos’ Vaquero de Fort Worth will be unveiled in May or June!