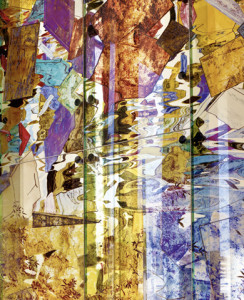 After a six-year-long collaboration with the federal government, a major architectural firm, a German stained glass manufacturer and a photo artist, the 2-ton, 28’ x 28’ The Austin Wall will be unveiled on Tuesday evening at the newly constructed U.S. Federal Courthouse in Austin. The courthouse lobby will be open for viewing at 6 p.m. and there will be remarks and discussion with artist Clifford Ross at 7 p.m. The evening will be a festive art opening with live music and food trucks, but it is a federal courthouse—so bring a photo I.D. and leave the weapons at home.

The public artwork by Ross was commissioned by the General Services Administration (GSA). The GSA reserves one-half of one percent of the estimated construction cost of each new federal building to commission artist projects.

Ross’ high-resolution photography of the Texas Hill Country, like those featured in 2009 survey exhibition Clifford Ross: Outside Realism at the Austin Museum of Art, is the basis for the imagery of the stained glass wall.