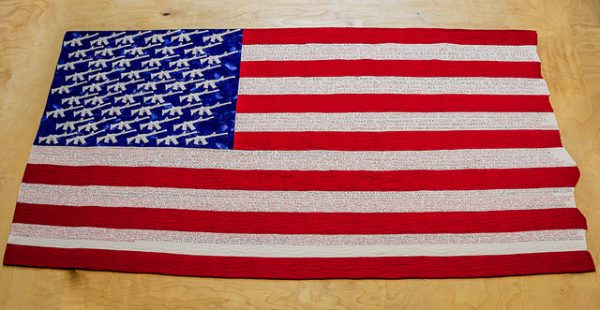 From January 7-12, 2019, an art show about guns will be on view at the Texas Capitol rotunda. Organized by Texas artist Lalena Fisher, the show, titled Assemble to Disassemble, is held in conjunction with the first week of Texas’ 86th Legislative session in Austin. The exhibition includes pieces by three artists, including Ms. Fisher, Washington artist Naomi Spinak, and New York artist Mison Kim, and claims to show “local, national, and international perspectives” about the role of guns in American society.

Showing gun-related art in the capitol building is a political move. Ms. Fisher’s piece uses handmade children’s shoes and a disassembled AR-15 to comment on gun violence and children. In Ms. Spinak’s embroidered textile, which resembles an American flag, the country’s stars are replaced by AR-15s, and the piece’s stripes are embroidered with the names of Americans killed in mass gun murders. And in Ms. Kim’s works on paper, she highlights the visual similarity between the architectural floor plans of government and religious buildings and the design of firearms. 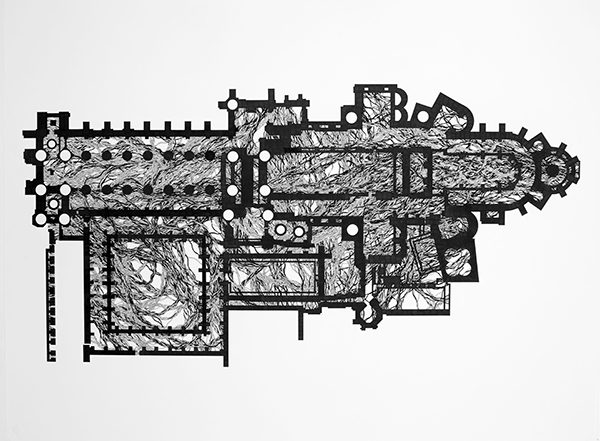 Texas has a long history of gun violence, but most recently the state made the news in 2018 with two particular attacks. First, a student killed 10 people at Santa Fe High School (Santa Fe, Texas is located between Houston and Galveston), and second, a shooter in Sutherland Springs, Texas killed 26 people in a church shooting.

Though it’s unclear what is on the Texas Legislature’s agenda for 2019, some representatives have proposed bills regarding guns. Representative Joe Moody, a Democrat from El Paso, filed a bill that “would allow guns to be taken from people who pose an immediate threat to themselves or others.” Another bill, proposed by Mr. Moody and his fellow El Paso Democratic Senator Jose Rodríguez, would allow a judge to, as reported by the Victoria Advocate, “sign a temporary order to remove guns from a person with evidence of substance abuse, a history of threatening violence or a criminal record.” 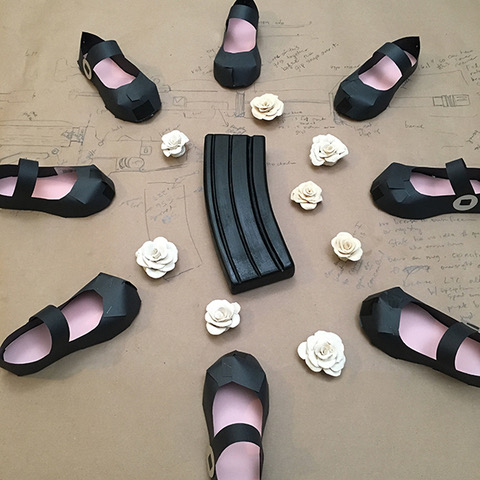 For the six days Assemble to Disassemble will be on view in the Texas Capitol rotunda, it will likely be seen by statehouse visitors and lawmakers alike. Ms. Fisher hopes the show will have an impact: “[My artwork] reinforces the unity out here on the ground: We want better gun legislation.”

I just want to clarify that the show will be in the *Ground Floor Rotunda,* which is downstairs from the entry level Rotunda, and accessible by stairs on either side of the main Rotunda (and through some double doors), or by elevator.
Also, the Capitol Visitors Parking Garage is free for the first two hours, and $1 for each hour thereafter; it is located 1201 San Jacinto Blvd., Austin, TX 78701.
Thank you so much.