by Betsy Huete May 19, 2014
FacebookTwitterEmail

[Disclosure: I was a graduate intern at DiverseWorks at the time of this performance.]

“So again, Camp rests on innocence. That means Camp discloses innocence, but also, when it can, corrupts it.”

The performance largely mimicked the video installation commissioned by DiverseWorks—also titled Moved by the Motion (2014)—in which Tsang constructed a narrative around boychild and her performances. Weird things happen in the video, like a futuristic police force arresting boychild and friends, but Tsang spends most of his time focusing on boychild practicing choreography in front of the mirror. The live performance riffs on this, making practice the performance, exposing all the small victories and failures that occur in preparation the final product. 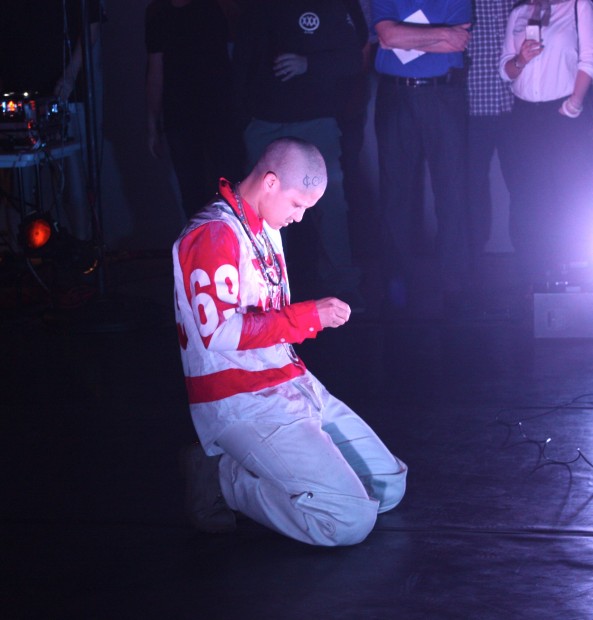 Wrong. At first glance, Moved by the Motion—being completely over the top as it is—seemed headed on an accelerated train to boring queer performance art: shocking to sheltered and conservative people, yet obvious to everyone else. But while these objects could have easily dominated the performance, they instead formed a kind of emotional detritus from which boychild used to perpetually construct masks and build identities.

A performance structured between spoken word poetry and a rehearsal, boychild relentlessly transitioned from solitary engagement—via dancing, looking, smearing makeup, gyrating in front of the mirror—to interaction with Tsang with mixed results. The most evocative moments ironically happened when boychild was probably least aware of the audience. Locking eyes with herself in the mirror as she practiced her choreography, the audience was left on the sidelines as voyeurs, witnesses of intensely intimate moments.

In her choreography, boychild portrayed a woman at once empowered and eaten alive by her own sex. She dynamically and honestly communicated a myriad of wrought emotion quickly and seamlessly. In a matter of seconds, boychild would transition from grace and elegance to a kind of writhing, as if to attack or shield oneself from an unknown or invisible assailant. The writhing would often consist of the kind of undulation from the diaphragm up through the throat and out of the mouth, as if she herself was unsure if she was ingesting something or vomiting. This kind of graceful display of grotesquerie allowed for a conflation of adult sexuality and childlike fumbling, a woman helplessly clamoring for affection and clarification, movement born of infantile necessity and starvation. 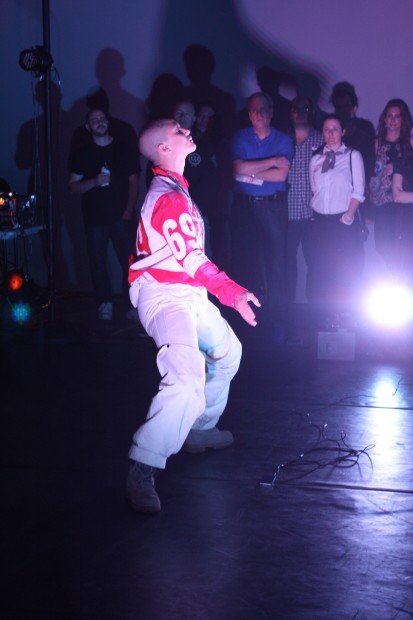 About midway through the performance, boychild faced the mirror and tied what looked like plastic rope around her face. Wrapped so tautly her skin was bulging out the sides, she looked trapped and scared. It was legitimately heartbreaking. 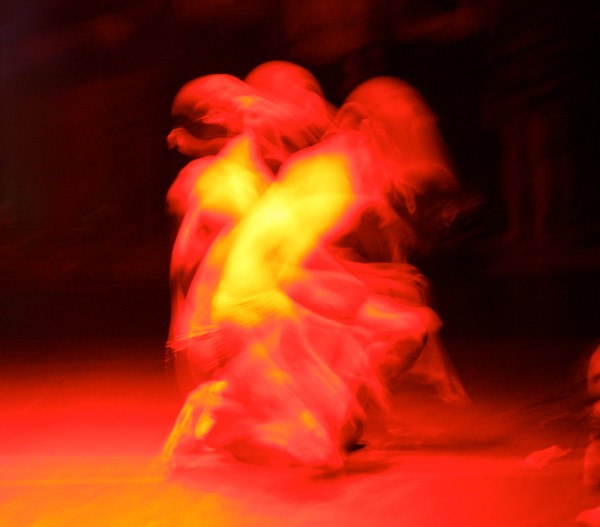 Of course these movements were premeditated, but the choreography nevertheless approached a kind of reckless abandon, and, as interior as it was, it was also strangely conversational. So while the audience was deliberately excluded from boychild’s rehearsal, as voyeurs on crying, masochistic, liberating, and innocent moments, we nevertheless felt fully locked-in and participatory. Oddly enough, Tsang’s live readings seemed to do the opposite.

The poetry not only communicated directly with the audience—it also served as cues for boychild. Occasionally she would leave her post at the mirror to speak directly with Tsang, and it was here where both fell out of character. Although their inflections and facial expressions suggested an actual conversation between collaborators and friends, it felt too real and thus did not read as a composed dialogue. It was the kind of authenticity in a performance that did not translate appropriately in the work, as if the interaction was the kind that should exist in their personal lives, not on stage. The conversation too casual, the inflections too conversational, the dialogue belied the heightened intensity of the choreography and overall performance.

Regardless of how well the live reading panned out, it amplified the sense of pain, intimacy, adventure, and bravery inherent in Tsang’s video installation of the same title on view in the gallery. This was hugely important because, while the video piece is luscious and beautiful, it simply cannot touch the visceral experience of its live iteration.

Moved by the Motion, part of CounterCurrent, happened on Saturday, April 12. CounterCurrent, organized by the Cynthia Woods Mitchell Center for the Arts, ran from April 9-13, 2014. Wu Tsang’s exhibition, Moved By The Motion was on view at DiverseWorks March 15-May 3.