Performance Art is Back In! (Events for Those Who Need a Primer)

Those confused or inspired by the recent lovefest with performance art may have already discovered PerformanceSW’s educational series held in conjunction with the exhibition DallasSITES: Available Space, the experimental showcase of contemporary art of North Texas at the DMA. PSWxEdu (the title of the series) presented its inaugural catch-up “Introduction to Performance Art” on July 25, and “Endurance + Ritual in Performance Art” on August 8. This Thursday, they will present a panel discussion called “Travel + Technology in Performance Art” (and there’s one more on “Sport + Persona” the following week). 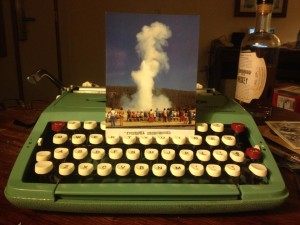 The panelists for “Travel + Technology” are Rachel Cook of DiverseWorks (Houston), Anthony Thomas Shumate (Houston), Jesse Morgan Barnett (Dallas), Jeff Gibbons (Dallas) and Justin Ginsberg (Dallas), and it will be moderated by Darryl Lauster, Assistant Professor of Intermedia/Sculpture, UT Arlington. Gibbons and Ginsberg, as the collective Apophenia Underground, are in the midst of a performance art project that involves driving around the U.S. “until approximately 8/15” and posting their adventures on social media, so they won’t be physically present; Lauster will discuss their project in their absence. “Through Twitter, Vimeo and US mail,” Lauster reports,  “I have been virtually traveling with them.” The panel is meant to address the following questions, which range from obscure to obvious: “Can travel be considered a performative act? Has technology transformed the way we understand performance? What is public? What is private? What is here? What is there?” 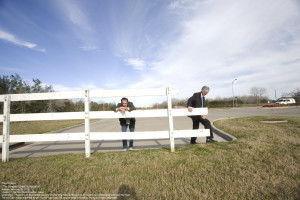 How about “what is in and what is out”? On August 16, in a performance that sounds pretty close to some sort of political art (though it’s unlikely that the artists would admit such a thing), the Art Guys will walk the sidewalks around City Hall in downtown Houston while wearing portable fences around themselves in a piece called “Good Fences Make Good Neighbors.” It’s one of 12 events planned celebrating 30 years of collaboration between artists Michael Galbreth and Jack Massing. Another veteran performance art collaborative team, the Good/Bad Art Collective has been reunited to create a piece for the Nasher Sculpture Center’s ten-year anniversary project, also marking the 20th anniversary of the founding of Good/Bad. They will address the PSWxEdu panel’s question “Has technology transformed the way we understand performance?” with a 28-minute infomercial to be aired during the run of the Nasher XChange exhibition.

Performance art, once denigrated by many to the “peanut butter and nakedness” category of incomprehensible contemporary art, has now become way cool. The video for hip-hop mogul Jay-Z’s Picasso Baby: A Performance Art Film just debuted publicly Friday night on HBO, and even art critic Jerry Saltz swooned about the experience of the actual performance, admitting: “Maybe I was smitten by fame.” It was cool that Jay-Z was rapping about contemporary art; it was cool that he did it in a gallery space; it was cool that there were tons of famous artists there; and it was way cool that he called it performance art. Everyone seemed to call it “performance art” instead of a “music video shoot,” even though it was Jay-Z (!), there were video cameras, and everyone in attendance had to sign a release form.

In a recent Rolling Stone article, Jay-Z gets nostalgic about the 1980s: “The arts and hip-hop really partied together.” Seemingly unaware of pre-hip-hop art history, he adds, “But when art started becoming part of the gallery, it was this separation. But we pretty much came up together.” 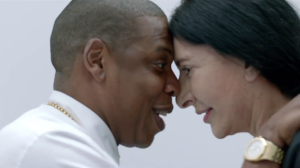 When Marina Abramović showed up to the event and interacted with Jay-Z, it was unclear who was who was capitalizing on whose street cred. Abramović, whose 2010 The Artist is Present show at the MoMA was the biggest exhibition of performance art in the museum’s history, began working in the early 1970s and now calls herself the “grandmother of performance art.” Having worked on projects with James Franco and Lady Gaga, she is now in the midst of a $600,000 Kickstarter campaign for the completion of the Marina Abramović Institute, dedicated to “the presentation and preservation of long durational work, including that of performance art, dance, theater, film, music, opera, and other forms that may develop in the future.”

In an article for The New Republic (published a few weeks ago, but being passed around again since this morning via the Weisslink email list), Jed Perl’s “Spectacle for Spectacle’s Sake” discusses not just performance art (James Turrell is the starting point of the essay), but all that grandiose and theatrical contemporary art borrows from other performative arts:

Turrell, Abramović, and McCarthy have always struck me as dabbling in theatrical acts or strategies that in the theater world would look at best undistinguished and at worst altogether amateurish. And now, when the aggressively amateurish artistic acts of Koons, Hirst, and their kind dominate, an earlier generation of the amateur avant-garde can appear almost heroic.

Of course, artists such as such as the Art Guys and the Good/Bad Art Collective present works that are not so heroic and often ironic, if not downright anti-theatrical. But if performance art really is back in, it might be time to learn to tell the difference and to get some education through venues like PSWxEdu, or catch up with these veteran performance artists, see what the new ones are doing, and catch a hip-hop concert or an opera to get a feel on how contemporary performance art is holding up.

How anti-intellectual is performance art in the USA? Very intelligent/looks great/sounds great/very expressive Pussy Riot are carted off to prison in Russia and Marina Abramovic/Lady Gaga/Yoko/JayZ get the fame and ego boost/material affluence big prizes in the USA. Femen is performance art. Pussy Riot art has intellect.So does Femen. The philosopher Zizek also hails from` post-soviet` eastern Europe. Andy Warhol`s grave was livestreamed to the world 24/7 a few days ago. After Warhol died Leo Castelli told conceptual artist that Warhol had been secretly buying Kosuths work and donating them to public art museums . What a commercially and ideologically correct `apartheid` art/world it would be without Pussy Riot art.

It’s a bit ridiculous to claim that American performance art is anti-intellectual. Abramovic and Ono have been in the art world for decades, and both went through periods where there were no rich art collectors to support them.

Moreover, stating that Pussy Riot does not need “rich collectors” is problematic, considering that they, unlike many other young and ambitious artists, are known internationally for once performance simply because the Russian government jailed them. Not only that but many rich Americans and celebrities supported them wholeheartedly and protested their imprisonment (http://hyperallergic.com/73271/pussy-riot-the-documentary/). They formed in 2011, it took them only two years to get the amount of recognition and fame that it took Ono and Abramovic, and other performance artists that began working in the 70s, decades to obtain.

Yoko` book `Acorns` infantilises the reader.As do her other works.Pussy Riot art statements adultilise. It took decades/centuries for the Pope/Dalai Lama/rich collectors etc to attain shallowness. There`s no virtue in that. Zizek`s `The True Blaphemy` arrived defending Pussy Riot conceptual art before the celeb supporters turned up. PR`s new music vid `In A Red Prison` rocks as good as Iggy Pops `Neon Forest`! And that is a virtue. Joseph Kosuth at Sean Kelly Gallery NY won`t tell you this.

Huh? What was that you said?

Check out the websites of the artists mentioned. Putin and Patriarch Kirill dictate what (performance) art is in Russia and imprison artists who criticise the kremlin`s lies. There`s freedom of expression in America and (unlike in Russia) there`s also freedom after expression! Nice as it might be to sit staring at Marina Abramovic and become part of her career-Buddhism it does seem to negate having an intellect. Perhaps that`s the attraction. There are some photopieces by Marina Ab and Cindy Sherman in the `Divine Bodies` exhibition at the Laing Gallery here in Newcastle. There are also some paintings by John Currin and Marlene Dumas. Pussy Riot art is explicitly Duchampian in its questioning (see their interview in the New Statesman)and intellectually alive and engaging. Also it doesn`t need the rich collectors artworld for power,prestige,status or profit. It exists independently in the 21st century .But banned in Russia. I`ve started a portrait of Hilma af Klint. Nice sunny day here.

I still don’t understand your words. Can you clarify please?

Pick a sentence you don`t understand and I might reply.There`s an interview with me in the art&music mag FixeMag http://blog.fixemag.org/tagged/arthur-mcdonald .In the meantime here`s a great one -liner from Woody Allen: ” I`m very proud of this gold watch. My grandfather sold it to me on his deathbed.”

Thanks. Is it the title of an essay you`re writing? Would you agree that in Marina Abramovic`s `The Artist Is Present` the artist is actually absent and what`s actually present is the standard ,conformist art ideology but with a nice looking woman we can stand in line to stare at and she gets paid $300 an hour? The cushy little number/nice little earner is present ?