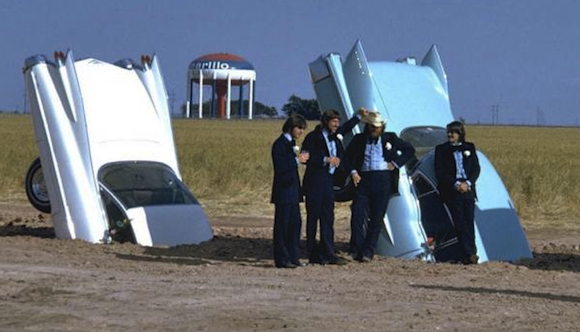 The Houston Cinema Arts Festival (HCAF) may not take place until November, but in off-festival times HCAF also presents an “Artist’s Choice Film Series,” inviting visual, performing, and literary artists to select and introduce a feature film of their choice about their own art form. Tonight, June 20 at 8pm, Jack Massing (one half of the conceptual art duo, the Art Guys) will present his choice at Brasil Café.

The film to be screened is Space, Land and Time: Underground Adventures with the Ant Farm. Ant Farm was an art/architecture collective whose shenanigans certainly inspired later artists like the Art Guys. Most active in the seventies, Ant Farm is probably best known for the Cadillac Ranch out in Amarillo.

Co-founder Doug Michels summarized the mission of Ant Farm: “We wanted to be an architecture group that was more like a rock band.”