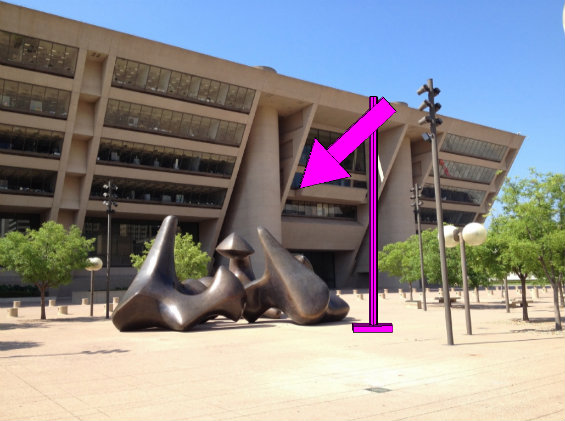 The Nasher Sculpture Center has revealed the plans for the final project to be included in its Nasher XChange exhibition to open mid-October in celebration of the Nasher’s tenth anniversary. Artist Rachel Harrison will fabricate a giant pink arrow to be installed in the plaza at City Hall in downtown Dallas, which will point to an existing sculpture at the site, Henry Moore’s 1978 The Dallas Piece. Harrison’s project grew out of a recent visit to Dallas City Hall during which she was surprised to see Moore’s outdoor sculpture encircled by metal barricades (since removed). The giant arrow is meant to address these sorts of “conditions that frame our encounters with works of art.”

In his art blog for the Dallas Morning News, Michael Granberry calls attention to the irony of the final project’s location at City Hall. Apparently, there is a city ordinance (obviously forgotten or ignored) that, if enforced, should have stopped the whole Nasher/MuseumTower reflected glare controversy. Granberry cites the ordinance:

“A person shall not conduct a use that has a visible source of illumination that produces glare or direct illumination across a property line of an intensity that creates a nuisance or detracts from the use or enjoyment of adjacent property.”

Suddenly, the sculpture starts to look like the Museum Tower, with the arrow representing the reflected sunlight and the Henry Moore, of course, a stand-in for the Nasher.

“Suddenly, the sculpture starts to look like the Museum Tower, with the arrow representing the reflected sunlight and the Henry Moore, of course, a stand-in for the Nasher.”

Not really. Also, the fact that the barricade is gone means the pink arrow doesn’t make sense anymore.

During the 80’s I conserved Henry Moore’s “Dallas Piece” twice because street people were using the interior spaces between the three forms to urinate and defecate. Urinating on the bronze formed green runoff stains, and human waste had to be water blasted from the ground plane before I could begin work. I guess the metal barricades were placed to stop this activity.