In celebration of its tenth anniversary, the Nasher Sculpture Center has commissioned ten public art works at ten diverse sites throughout Dallas, in an ambitious, citywide sculptural art project dubbed Nasher XChange. While they have released the names of the ten artists, specific project plans are being announced one at a time throughout the summer, every few weeks. (To catch up on I, II, and II, visit Glasstire’s previous post.) 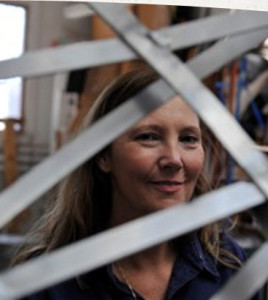 Today, they announced that L.A.-based artist Liz Larner will install a giant, stainless steel “X” sculpture in the courtyard of the Edith O’Donnell Arts and Technology Building at the University of Texas at Dallas, part of a new interdisciplinary curriculum which “joins science with the humanities, creativity with technology, theory with practice, and learning with research.”

The Nasher also posted a short video on their site about the latest project, which includes some thoughts from the artist. “One of the things that I love about ‘x’ is that, in mathematics it’s called a variable,” says Larner, “and so it means that anything can be ‘x.’”