Reading Richard Bailey’s prescriptive piece here on GT a few days ago (late I know), on Dallas artists needing to look for more inspiration from their cityscape and needing to be more inspirational to him, two things struck me right away. 1) He loves adjectives, and 2) While I understand his desire to rally the troops, as it were, as I have attempted more often than I’m proud to admit anymore, does it seem at least a little odd that he never alludes to the various public/site-specific art that has happened around town recently? I was thinking of things like PRKD/Subject to Change, Homecoming!’s The Eagle Has Landed, Aurora, Seventeen Hundred Seeds, and even a little doodah called the Nasher XChange.

He might have missed them. And I agree with some of what he wrote.

But before I forget, 3). Did any artist find it insulting that he was not only asking that you make more and better art, but that he mapped out which sites in Dallas you could respond to? Granted, I’ve suggested that artists collaborate, and that curators curate outside their institutions, and I once used Devo as an example of good work coming from unexpected (dull) places. But I don’t think I dictated artists’ lunch menus or working subject matter. Tell the troops they’ve been boring you if you must. Or don’t. I can tell you from experience that it’s not fair to them, and not worth it. Most bad artists think you can’t mean them because they believe their work is already great, while the smarter artists get rightfully pissed off.

And just like fat people never need to be told they’re fat because, seriously, they know, the smarter Dallas artists don’t need to be told about how stultifying and suburban Dallas life can be. They know.

But Bailey’s heart is in a fecund, lovely place, so, carry on I suppose. 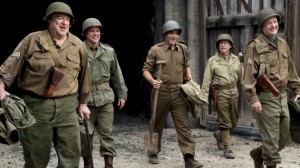 The thing that most tanked the movie The Monuments Men for me, besides the obviously jarring tonal changes and lack of follow-through on any tension, was Clooney and his producers’ apparent (and likely accurate) belief that very few in their mass-market audience could possibly care about art that much, or are even hostile toward it, thus the need to cast the most likable actors in Hollywood to promote the movie and play art’s saviors. (What movie-lover would challenge Matt Damon and Bill Murray’s scramble against Nazis and Russians?) Clooney & Co. explained carefully, in several long monologues, why vestiges of culture are worth saving from the ravages of war. I really wanted this movie to work. I love the historical subject matter. But all the audience hand-holding in the face of art was depressing.

I think most anyone lacking psychopathic tendencies would agree that, widely speaking, saving lives is more important than saving art. I would have been the first in line to help Giacometti when he allegedly said: “In a fire, between a Rembrandt and a cat, I would save the cat.” (What did that cat ever do to you? Don’t answer that.) But I suspect a lot of GT readers, like me, might save a Rembrandt over a lot of individual sorry-excuse-for-a-human-being humans, and people like us are overwhelmingly outnumbered. No matter how popular the topic of art is among the chattering class, especially via the media and its obsession with young art stars and the newly rich acquiring and controlling the market and museums, the old consensus-built value of art is still of zero interest to the vast majority of people on this planet.

Just read the comments sections in the major media outlets covering the story about the nine-year old kid (“anti-establishment” per her parents) climbing all over one of Donald Judd’s best pieces at Tate Modern. These comments are humbling (no, scary) to those of us who might have, if we had been there, reflexively run over and yanked the kid off the sculpture by her arms, dumped her on the floor and hissed at her godforsaken minders (who just stood by and watched her do it).

A few gems:
“Excellent. The kid’s reaction is completely correct. The emperor has no clothes! It is all complete cr*p.”

and
“That’s what is meant by participation in art.  If that is art my kids are earning me millions. Just rubbing the noses of the lower paid into the mud.”

and
“Art? What a joke. This kind of utter drivel only demonstrates how detached from reality these self appointed arbiters of ‘Art’ are.”

So after George Clooney and John Goodman and you and I had dumped the kid on the floor, we art defenders would have been mobbed by the Tate’s regular Sunday crowd, taken out back, and shot. 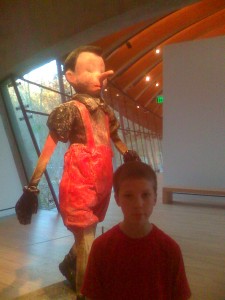 Please don’t assume I’m one of those people who think kids should be kept out of museums. I remember my earliest field trips to museums as my discovery of Shangri-La, and I think the slashing of funding for art education at any grade level or demographic is a recipe for a nation of even more slack-jawed yokels and stunted all-tech geeks. It is, in fact, tantamount to neglect. The art is out there. Let them see it.

We might all be citing a recent well-structured study conducted in Arkansas schools after the opening of Crystal Bridges, in Bentonville, in which the big lottery sampling of kids who visited the museum, when tested in the weeks after their field trip, “demonstrated stronger critical thinking skills, displayed higher levels of social tolerance, exhibited greater historical empathy and developed a taste for art museums and cultural institutions.” They also voluntarily went back to the museums with their families. In other words, they notably evolved emotionally and intellectually just from being around art for one day. If you’re concerned about correlation not equalling causation, please read about the study here.

We seem worried about the competitiveness of our future kids in a global economy, though if that’s your primary goal in shaping their education, I can’t think of a better way to help a future free-marketer be more competitive than to help him be more balanced, thoughtful, and knowledgeable. One-trick-pony science/math whizzes might head to Silicon Valley to gold dig amongst the startups, but the richest collectors I know (i.e. the richest people I know personally who actually earned their money) are finance people who honestly love art, and have since they were young. They’re also more benevolent with that cash.

So when you see a group of school kids careening through an exhibition, don’t get angry. Most of them, after instruction from a teacher or parent, won’t climb the Judd, and despite their age-related ADHD, they are looking and listening. They’re little sponges. It’s getting through. The world will be a better place tomorrow because those kids are at the museum today. 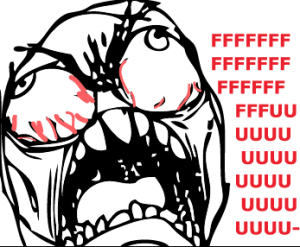 More on comments sections, and the great opinion divide

Back to movies for a second, but really this is about something else. In the last few months, the New Yorker online culture critic Richard Brody wrote his opinion on three movies—Inside Llewyn Davis, Her, and The Wolf of Wall Street—and I disagreed with him, acutely, about the intentions of the filmmakers. Not the plot, or loose ends, or the characterizations, but the very meanings of the movies themselves.

I was surprised by Brody’s Triple-Crown shutout of what I assumed was my truth, a.k.a what must be the actual truth about these three movies. I write that because I grew up on the words of left-leaning weeklies’ critics. I tend to at least partly agree with the bolder points of the good ones, and Brody is good. But upon first reading, I was temporarily scandalized to the degree I felt he was being irresponsible.

You know what I did after that? Here are some options:

a)    I wrote an anonymous and venomous “takedown” in his column’s comments section, then took my impotence and gleefully went looking for other online opinions to disagree with anonymously, since habitual anonymous commenters—especially trolls—are on the spectrum of psychopathy, as deduced by a recent study about online commenting.

b)    I wrote a venomous “takedown” in his comments section and left my real name and a link to my writerly blog (note: I do not have a blog).

c)     I wrote a letter to the editors about how off-base their culture critic is, and told them he should be fired (with of course, the secret hope that my letter was so awesome that they would immediately fire him and hire me me me!).

d)    I vented ad nauseam to friends and family about this terrible critic at this magazine I sometimes read online and in print.

e)    I chilled out and went about my day. Because he’s just one critic, doing the job he loves and was hired to do.

Answer: e. (That would be better upside down.) Also, I gave Brody’s points a bit of thought over the next few weeks, and decided he might actually be right about one of his interpretations. I won’t say which one.

Seen rape of Europa, the movie?
Great thoughts in your story…thanks

That last article of yours came at a fiery moment, for sure. For all the nastiness and venom that it brought to the surface, I feel like it galvanized many young artists into responding somehow. Since then, the atmosphere has shifted substantially. While Richard’s piece might have been prescriptive, I don’t know if it’s possible right now to trigger the kind of fire as in mid 2012. We’ve had a lot of centraltrak panels since then to not really solve anything, but we had fun talking about it (and talking, and talking). Citywide psychotherapy, I suppose.

Hopefully the reason it’s a little quieter now is because we’re all busy in our studios.

….Though, I suspect it’s because we’re all busy feeling implicated in a cranky conversation about race relations in the Dallas art world.