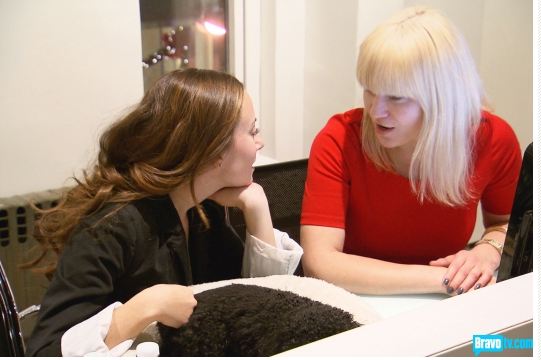 “I’m sorry, I’m supposed to remember what you just told me two seconds ago?”

Well y’all, we made it.  While the episodes were sometimes painful to watch, I have thoroughly enjoyed recapping them for you!  So let’s talk about the SEASON FINALE.

The Gallery Girls finale was filled with drama but little to no conclusion!  Such a letdown.  You know those little still frames with two sentences of epilogue Bravo usually gives you for each cast member at the end of their season finales?  No such thing here.  And considering this week’s Real Housewives of NYC’s finale included useless little tidbits like ‘Sonja still has not yet made a toaster oven’ and several of the gallery girls were considering quitting their jobs by then end of the episode, I think we deserved a little closure Bravo!  So here’s what happened with the girls…

Let’s start with Maggie.  At the beginning of the season finale, Maggie sits down with Amy to apologize for hating her at the direction of Liz.  Amy’s reaction was to burst into tears begging the question: exactly how many people dislike you??  Because this response seems a little extreme for a girl you barely know deciding you’re cool after all.  And yes, this exchange is important.  You’ll find out why later.

After this, Maggie gets a call from Frank Bernarducci for a trial run at his gallery AND she gets offered to get paid for the evening!!  She helps at Bernarducci Meisel Gallery’s opening reception and kind of bumbles around a little bit but doesn’t have any egregious errors.  Although she is unable to name both shows up at the gallery even after a tour of the exhibitions.  Note to all want-to-be gallery girls, always ALWAYS research the place you’re interviewing and, while you’re there, bring a notepad and take notes.  These are things even I appreciate when interviewing potential interns.  All in all, her day seemed to go well.  Not fantastic but well enough.

So what does she do?  Go over to Eli Klein, quit her internship, and tell him that Frank Bernarducci is willing to pay her to work for him. To which Klein hilariously replies: “I don’t want people working for me for free.”  Ha, Eli.  Good one.

Now before we finish Maggie’s story line let’s move over to Amy.  Last week Amy was told by her father that she needed to be out of her apartment and find a job in two weeks.  In order to solve the job problem, Amy does what every job searching gallery girl does.  Send her resume out to literally every gallery she might have any interest in working at in New York City.  Not just the ones with job postings, literally all of them.  I’ve done this multiple times and gotten two separate gallery jobs from this tactic, neither of which had a job posting.  May I just say, the best way to get your email read is to title the email ‘Inquiry’.  It is both vague enough that people get curious to click and accurate enough that the reader may not think you were intentionally trying to be crafty (even though you totally were).

Anyway from this endeavor Amy gets a call back for a trial run…. FROM FRANK BERNARDUCCI.  While many of you may be crying foul – this is too coincidental to not be fictional-in the gallery world it is completely possible.  There aren’t many galleries hiring at any given time, so if you and a fellow gallery girl friend are both looking for jobs, you’re probs going to be each other’s competition.  Anyway, on Amy’s trial she smiled, acted chatty with the boss man, TOOK NOTES, and indicated that she knew information from the gallery’s website.  Incidentally, she got the job on the spot.  And Maggie got to cry her way home in a cab after an awkward meeting with Bernarducci that started with her seeing Amy sitting at the entrance desk.

Amy and Maggie were two of my favorite cast members work wise.  They both had to deal with work situations that were VERY realistic for a gallery girl.  And yeah, they did get a little bit more luxury along with their parental support than most girls, but some form of outside help is needed in order to do the gallery thing for real in the beginning.

Liz was also semi believable.  She is the classic young-artist-working-at-a-gallery girl (or guy).  There are lots of those actually.  The fact that she is also the girl whose dad (or uncle or godparent) has the best art collection ever along with being an artist is much rarer, but still could exist.  Oh and just for the record, all she did this episode was talk about Maggie’s boyfriend behind Maggie’s back.  And not even in a witty way.  Such a waste.

As for Kerri, in the Season Finale she mostly just talked to her dad and Sharon about how she couldn’t juggle both jobs forever.  She sounded like she was leaning towards quitting the internship at the art advising firm, but there weren’t any definites.  Her struggle was pretty gallery-girl-legit even if it was really annoying that she didn’t have any background in art at all except that she went to Europe that one time.  Because going to Europe is totally a real education in art history.  Kind of like going abroad with a digital camera and/or Instagram on your iPhone makes every college student a totally legit art photographer.  Best line from Kerri:  “It doesn’t pay me; I can’t be an intern forever!”  Awww sweetie! Yes you can.

Anyway, now onto the other focal point of this episode, the girls of EOC!  Last week, we got to see Claudia open a final termination notice from the electric company.  Apparently after receiving a second one she decides to have a staff meeting with Chantal and Laura.  Basically, Laura blames Claudia for not selling any paintings, Claudia threatens to sublet the store, and Chantal mentions she might be moving to Paris.  Chantal does say on the side that Claudia isn’t reaching out to press about their exhibitions or actively networking on her own which actually would hurt sales at a gallery.  A large part of my job as just a gallery girl (not a gallery director like Claudia) is to do press and talk to people.  It’s kind of the name of the game and I’m surprised Claudia didn’t figure that out sooner.

For the rest of the episode, Claudia says some nasty things about Chantal to Angela, Angela tattles to Chantal, and Claudia and Chantal finally have the “I don’t know if this business relationship is going to work out” conversation.  While I don’t know if Claudia still does work at EOC, according to their website the store is still alive and well and includes a gallery program.  Caution: Do not try this at home.  If you try to open a gallery with your twentysomething friend whom you have no idea how to work with, there will probably be less of a happy ending than here.

As for Angela, she was the most ridiculous cast member on the show by far, and not just because of her wardrobe.  People keep asking me if I’m pissed at how Bravo is depicting gallery girls and, honestly, there were some serious nuggets of truth in there.  However, if I were a young artist, I would be furious that Angela was the chosen one to portray me.  Yes she had multiple jobs but, you know what?  Legit artists spend less time talking about how the most essential purchase of their life was a Givenchy bag and more time being obsessed with making art.  I work with artists all day long okay.  Making art for a real artist is a compulsion, not something they do to pass the time, become an ‘it girl’ and probably drop in three months when they get bored.  So yes, Bravo seriously dropped the ball here.  But I get why they focused on the social aspect of being a gallery girl.  What else were they going to do?  Watch the girls describe the same painting in a very similar way to several people in a row, schlepp paintings back and forth, answer the phones and sit at a computer writing press releases and answering emails?  It might be realistic, but it would also be very boring.  And to those of you who think these girls are ridiculously catty, you clearly have never seen any of the Real Housewives seasons.  Over there, shit gets real-ly fake.

For my last note about Gallery Girls Season 1, I would like to leave you with a stellar quote from Maggie describing her experience at the beach:

“It’s not that I’m afraid of nature.  It’s just that I don’t like it cuz I live in New York City there’s not a lot of nature around so when I get around squirrels and birds and seagulls it’s….hard.”

I literally burst into laughter at that one.  Mostly because I didn’t realize birds and seagulls were separate entities but, again, I digress.

I love your comments!