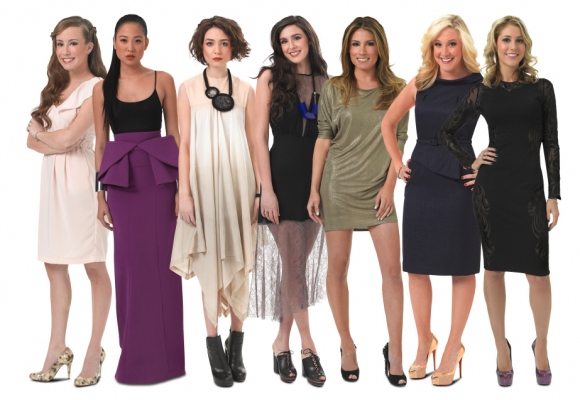 The cast of Bravo’s Gallery Girls. Photo from Bravo.com.

Some of you may have seen “Gallery Girls,” the new Bravo “reality” show which premiered on August 13. For those of you who are less of a slave to Bravo’s programming than I sadly am, what this show claims to do is to give you “a glimpse of the super cutthroat world in which these (gallery girls) live.” Cut to the “girls” discussing their obsession with NYC and Sex and the City while simultaneously introducing us to the apparent war that goes on between Upper East Side and Brooklyn gallery girls.

In between the vapid remarks of the promo, however, are some tiny bits of truth of what it is actually like to be a gallery girl. One girl laments: “I thought I had a pretty great résumé until I actually graduated college. You find out that everybody else has the same résumé you do.” Another states, “You work for free until somebody one day says, ‘We will give you a shot.’’’

I’ve been a gallery girl for the past four years of my life. While that might seem like a long time to do any job that contains the word “girl” in it, if you want to have a real shot at working in an art gallery, you have to start early and work for free. Since my first unpaid summer internship working 40+ hours a week at a for-profit gallery, I’ve graduated with a BA in art history and and MSc in modern art history and have continued working in galleries the entire time.

The idea of a Bravo show about my current profession irks me. Even though I’ve had four unpaid internships, a volunteer position and five paid jobs in the art world, my close family and friends still have little-to-no idea what I actually do. And if they have no idea, I cringe even considering what the outside world thinks of my job. Yes, I’m vain like that. Most people think the majority of what we do is look pretty and stand around charming clients; basically act as the equivalent of an art gallery Hooters girl.

And, okay, I have been directed by previous bosses, on more than one occasion, to stand close to the windows during an exhibition opening to draw in clients. The other name for a gallery girl is a “gallerina,” after all. And I have, on more than one occasion, had to deal with slightly lecherous married clients without offending them or pissing off their wives, who are always standing within a five-yard radius.

“Oh, you want to take me to lunch? Ummm well, my schedule is just so crazy that there is just NO telling on any day what time I’ll be able to eat!”

But that, thankfully, in no way can encompass the entire gallery girl experience.

The first thing you have to do to work in a gallery is to actually find a job. Galleries are small businesses with a lot of people vying for positions, giving them the power to be ridiculously nit-picky. Do you know how frustrating it is to find your dream job, where you check every preferred and required qualification, until you see “Must speak fluent Portuguese”?

Then, once you’ve actually gotten your first, second and maybe third gallery girl position, you have to get used to the idea of working for free or to be “creatively” paid for a long time. And by creatively, I mean like a cocaine dealer (AKA hundreds in an unmarked white envelope) or even via Paypal. For a long while, I actually worked for free lunches and iced coffee. Trying to do my taxes this year made me realize I have a long way to go before I can be considered anything near a real person, like my many lawyer and finance friends. I like to tell myself the money I’m losing is an investment in a future job, and no, business school graduates, I do not want your opinion on whether or not that is a legitimate form of investment.

This working without making real money while simultaneously selling very expensive luxury items has caused me to have a contradictory concept of how money should be spent. I no longer bat an eye when clients consider building a new wall in their house to mount their just-purchased $45,000 sculpture, yet I am simultaneously appalled at how much Gillette charges for Venus razor cartridges, or that a box of name-brand cereal costs more than $4 (thanks, but I’d rather purchase my no-name “Crispy Rice Cereal” instead).

To work in a gallery, you also have to be okay with doing work that ranges from housekeeper-type chores, like washing windows, cleaning people’s wine spills, spackling the walls and removing any and all dead (or not yet dead) creepy crawlies, to ridiculously tedious admin work. One of my super favorite activities is updating gallery contacts. I’ve spent innumerous hours deciphering people’s handwriting left in notebooks who want to be on our mailing lists. Just a note y’all, if you can just barely read what you wrote down, there isn’t a chance in hell I will have any idea what [email protected] is supposed to be.

What working in a low-paid environment with an undergraduate and graduate degree under my belt, while having to work a second job outside the art world to pay the bills, has taught me is that I really REALLY want to work in an art gallery. I love my job and all of its random incongruous parts. I don’t know why; there’s probably something wrong with me. Working in galleries is like a drug. All it takes is a sale, a press release you wrote getting attention from art writers, or a fantastic exhibition review to make up for all the rest of it. The exciting part of this job is getting to be a combination of charming salesperson, marketing executive and Hollywood agent. AKA a little Nancy Botwin from “Weeds” mixed with Don Draper from “Mad Men” and Ari Gold from “Entourage”.  Kick ass, right? You want your artists to become famous, and you get emotionally invested in the business excelling both monetarily and in reputation.

So yes, Bravo putting their particular dramatic spin on what it’s like to be a gallerina is annoying to me, but it is also slightly intriguing.   I might have a small Bravo addiction. Over the next few weeks I’ll be blogging after each episode to give my own personal spin on the goings on in an effort to, hopefully, counteract any false information given out by Bravo’s latest series. (First post here.) It should be entertaining to say the least. But then again, catfights, crocodile tears and unintentionally hilarious people usually are.

Hilarious article! You should do a series or a column or something.

At least you get invited to lunches and dinner parties. Most artists don’t. They figure we don’t bathe. They’re usually right.

love it =your right!!

In my personal experience (I can’t speak for everyone), I’ve worked with approx 5 “gallery guys” and they were all either being paid the same as I was or working for free (interns).

Go, Casey, GO! Let the teeth rattle. Bet the Dictionary of Job Titles and task descriptions, for aptitude testing, from the Bureau of Employment Security, has overlooked “Gallery Girls and “Guys.” Would any of the various State Employment Commissions help to determine your aptitudes and therewith make a “job” placement? ROTFLOL!