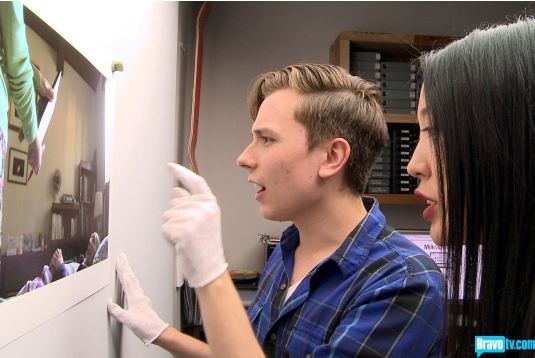 “Wait, is the photograph supposed to be level??” Image from Bravotv.com

For episode 5 of ‘Gallery Girls’, let’s begin by discussing Maggie’s attempt to leave the clutches of Eli Klein.  After taking a quick trip with her boyfriend to visit her parents, and having literally everyone there tell her she seems super unhappy with her job, Maggie finally decides to start looking for a paid position at other art galleries.  What a novel idea!  During this little exchange, we find out that Maggie has been working as an intern for Klien since graduating college….two years ago.  Totally brutal considering in a previous episode Klein at least pretended to think she hadn’t completed a full term as his intern.  For the record, the longest unpaid internship I have ever seen posted was 12 months and most are usually based on the academic year making them 5-10 months (one or two semesters).  I’m actually wondering what took her so long.  Could it be possible this had something to do with the previously alluded to tryst??  While that was probably just editing room magic, one can only hope that little hot topic will resurface later.

Maggie’s first interview is with a female gallery director who showed her around the space with the inevitable “So tell me what you think of this piece even though you know nothing about it and I’m going to judge every word coming out of your mouth.”  This is the worst type of question to ask an art person on an interview.  What do you expect her to do?  Tell you the painting is lame and the show you spent time and money promoting sucks?  Probs not the best way to get a job, so what’s a girl gotta do?  Lie through her teeth.  I actually have a couple specific “positive” adjectives I like to use in these situations.  I would tell you what they are, but then the jig would be up.

At the end of the interview, Maggie confesses that the place isn’t the right fit for her and doesn’t want a job there anyway.  Or maybe she just picked up on the fact her interviewer was definitely not impressed when she said she didn’t know anything about photography while standing in the middle of a photography exhibition.  Thankfully, Maggie’s second interview goes much better minus her getting points docked by the Associate Director for not being fluent in a second language or knowing how to do graphic design.  Because, you know, us art history majors are supposed to have studied every subject ever.  The best part of her interview was when she was asked what she learned at Eli Klein and Maggie totally blanked.  She should have said how to best fold doggie poop bags and the most efficient way to count tiny rocks.

Angela spent her entire time this episode preparing for her photography show that ended up being held in a shoe showroom.  For a hot minute I actually kind of wanted Angela to succeed.  She clearly was nervous and wanted to do well, but had no idea what she was doing.  First, Angela admitted she didn’t know photographs were sold in editions.  My only reaction to hearing this was a resounding “Huh?!”  Angela definitely could have benefited from one of those unpaid gallery internships, or at least paying attention when she went to other art exhibitions.  Next, she showed her lack of knowledge and skill while trying to hang her works in an uneven two row grouping.  A full measuring tape and level are usually useful in those situations.  While I understand how to hang an exhibition isn’t common knowledge, that’s what the internet is for!  I just checked and there’s some pretty solid beginner advice to be found on eHow.com.  Unfortunately, all my warm ‘n fuzzies about Angela’s show going well had to be totally ruined by none other than Angela.  Her parting thought for this episode solidified that she should definitely find another profession before actual artists try and destroy her:

“I get bored easily and I thought that photo was something that I wanted to do, but I feel in three months I won’t want to anymore.  I’ll be on to the next thing.  I’ll want to be a writer or something like that.  And I could see myself as a photographer but it’s always something new every few months.  It’s like maybe I should do this instead!”

I genuinely don’t understand why she’s on this show besides her penchant for questionable outfits, but at least they have yet to disappoint.

As for Kerri and Amy, they had a both eventful and slightly boring storyline this episode.  Amy throws a dinner party at her apartment and all the girls make fun of her old lady drapes.  At work, she is late to a meeting with Sharon, again, and then goes off to try and pawn some of her tasks on Kerri so she can do more of the fun work with Sharon that she’s always late for.  Clearly, #winning.  As for Kerri, she just talks about how tired she is and then goes and tells Sharon that Amy gave her random tasks.  Boring and a tattle-tell?  Not the best combination. 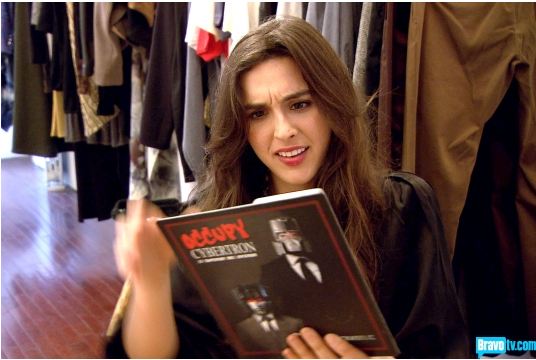 Claudia studying up on The Sucklord. Don’t worry, I’m confused too. Image from Bravotv.com.

In the realm of actually interesting events, End of Century is forced to work with The Sucklord, an artist who makes designer action figures, decorated toilet paper and, apparently, has a huge following in NYC.  After failing to convince The Sucklord to make My Little Ponies for EOC (major disappointment), Chantal and Claudia settle for theming his work “Occupy Cybertron” while simultaneously worrying he is going to alienate their current client base.  It is a tale as old as time, song as old as rhyme.  To have the money-making show that doesn’t quite fit in with your vision, or to hold on to your aesthetic and make diddly-squat?

While the masked nerdfest that followed almost looked like it was going to hit the fan during The Sucklord’s “performance piece”, once it was over, all Chantal and Claudia could see was a sea of green.  Good call girls, those “nerdy improv” kids (as Chantal dubbed them) had no issue shelling out $25 per toilet paper roll and The Sucklord’s show basically sold out.  Of course once it was all said and done, Chantal and Claudia suddenly LOVED him and his work and thought he was brilliant.  Quelle surprise.  I guess if someone made me that much money in such a spectacularly bizarre way I would probably say the same thing.

Next time on ‘Gallery Girls:

‘Cheers to Miami!’  The girls head out to Basel Miami and party down… Sharon has a serious talk with Amy and looks like she might fire her?? … Amy then offers to help the EOC girls with their pop-up shop.  Probably a bad idea considering it looks like Chantal and Claudia are about to start hating each other again… We get to see another gallery girl in a salon.  Yay for us….And people start to hate on Liz.  I guess they’re bored with Amy.  Aren’t we all?

Thankfully, Casey, you can address all the phony from real issues that Bravo scripts. So glad you watch each episode for us with great insight into what an internship does to/with/for one’s self esteem.

This show is nothing but Real Housewives of New Jersey or Jersey Shore wrapped up in the guise of silly young girls playing with stardom. Who needs to hear about bitchy young females acting as representatives of the art world. It’s pitiful and degrading to those who take the arts seriously. It’s hard enough trying to convince the American public that arts and culture are important facets of life. I am seriously embarrassed for us in that regard.

To put it plainly, i am disappointed that any time is spent on this site reviewing this absurd dumbing down of the arts and of our American culture in general. Shame on Bravo TV for continuing to pimp out garbage and bad behavior, and shame on Glasstire for adding fuel to the fire.