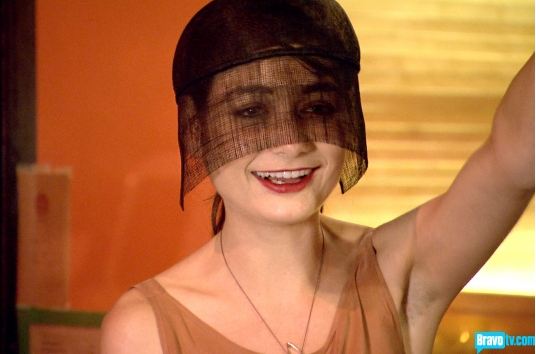 Get it together Claudia. Photo from Bravo.com.

So the majority of episode one of Bravo’s “Gallery Girls” was big on introducing the girls and low on any actual art.  Or, you know, working.  What is important to note here is that there is a clear division between the girls from Brooklyn and the Upper East Side (or UES for short).  Apparently each group thinks the other is really weird and vice versa.  Whatever.  If you’ve read my feature article, you know that as a Dallas gallery girl, I feel a bizarre need to not only watch this show, but comment on it. Here’s my take on the latest Bravo players:

First, there’s Angela: the man crazy, self-obsessed, want-to-be artist/photographer who also models and waitresses to pay the bills.  Oh and she’s on team Brooklyn and likes to dress “high concept” aka like a slightly goth Lady Gaga.  At one point she throws on a mesh body suit with pasties and some booty shorts to go to an exhibition opening.  Favorite quote from Angela during episode one: “Do you like how I light up when we talk about me??”  I can already tell she will have some of the best (and by best I mean hilariously vapid) sound bites this season.

Next up is Kerri, the lifestyle manager (that’s a new one) who is part of the UES group.  Kerri, apparently, saw some art in Europe and decided she loves art and wants to get in the business. Ooh-kay. Honestly, Kerri is pretty boring so far which means I’d probably like her in real life, although, a tiny cutthroat part of me hopes she fails since she didn’t go through the hell that was grad school that I did. 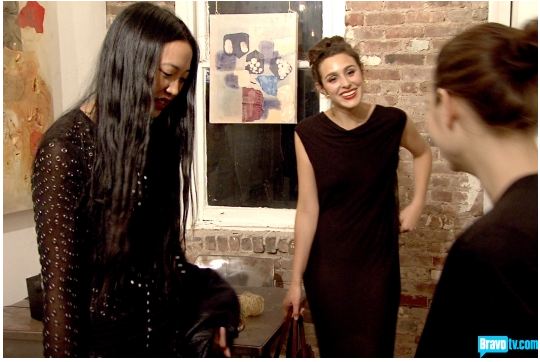 Amy is another one of the Upper East Side girls.  She apparently loves to party and her dad supports her which allows her to work for free as an intern.  I can’t really find too much fault in that; my parents have thankfully planned on me being poor ever since I transferred from Tulane’s business school to become an art history major.  Thanks Mom and Dad! I kind of like Amy.  She likes to drink, says outrageous things, and actually seems to have somewhat of a work ethic.  One of the most accurate scenes was of Amy at her art consulting internship attempting to man the copy machine.  Been there done that, girl.  Me and every form of copy machine are tight.

Claudia and Chantal are two of the Brooklyn girls who start out, at least, as friends who have decided to open their own gallery/boutique/I’m not sure what else shop.  Poor anxious Claudia is interested in owning a successful business and made the unfortunate decision to have her family lend thousands to Chantal’s weird hybrid space that she clearly dreamed up while playing in Candyland.  Chantal likes to talk about her “stress free” lifestyle so much it kind of made me want to throw something at her. A stress free small business owner is definitely an oxymoron.  Chantal, I can tell, will be the character I love to hate.

I have a feeling, however, that Chantal will have to fight Liz from the Upper East Side for the title of most annoying gallery girl ever.  Liz is interning at Eli Klein Fine Art and really REALLY likes talking about her daddy.  And no, this is not a daddy like Kim Zolciak’s infamous “Big Poppa” from the Real Housewives of Atlanta but like her actual daddy.  Within the first few seconds of being onscreen Liz refuses to lift anything heavy, paint, or spackle during an install because she thinks her clothes are too nice.  Ummm, can I just interject here that you’re not ACTUALLY a gallery girl until you install an exhibition in a silk shirt, pencil skirt, and 5 inch heels?  It’s kind of a regular part of the job.  Liz also proudly announces (like five times) that she can do what she wants because her father is a major collector and if she’s ever unhappy she’ll tell on her boss to him.  So gross.  She’s clearly the type of girl who wants to work in galleries for the “glamour” (haha) of it all and doesn’t realize in a small business you actually have to, like, work. 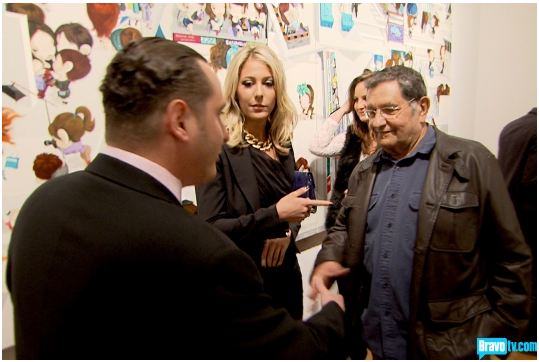 Liz playing “Haaave you met my dad?!” Photo from Bravo.com.

Finally, there’s Maggie.  She pays her bills with her trust fund and previously interned for free at Eli Klein until taking an unexpected break. Her interning montage after her introduction was the second most accurate depiction of being an art intern.  She basically did all the bitch work that Liz was shown refusing to do (and more) and says she thinks Klein likes to have pretty girl interns to boss around.  From the look of it, she’s probably not wrong.  Episode one shows Maggie belly crawling back to Klein to try and get her unpaid internship back.

The activities included in the pilot episode, for the most part, include the girls working very little, attending two very different art openings (one at Eli Klein and the other at End of Century, Claudia and Chantal’s space) and bitching about how weird the other girls are.  Oh and Angela prancing around in provocative outfits, talking about herself, and flirting.  Interestingly, I went in expecting to seriously take the Brooklyn girls’ side and hate the trust fund toting, whiney, Upper Eastsiders.  However, by the end of the episode, Chantal somehow managed to upset the spread and singlehandedly annoy me more than all of the UES girls combined.  That’s talent there folks.  However, she might want to consider fewer recreational substances and more caring about her business.  Just a suggestion.  Even more unexpectedly, during all that ridiculousness I somehow got hooked into the show and want to see what happens next.  Bravo Bravo, you’ve done it again.  Oh and the other part of the show what was definitely truthful?  Gallery girls do wear a lot of black. It’s kind of our thing.

Next week on Gallery Girls… Eli asks Maggie to make sure all of the sculptures have the same number of pebbles at their base.  Ha, sucks to be you.  Oh and it looks like they might have hooked up at some point. That sucks even more…Kerri gets to go to a Phillips de Pury auction.  Like I said, snoozefest for TV and something I would simultaneously love to do in real life…Also, the girls get to party at Art Basel Miami, and tears ensue. Duh….And Claudia breaks down because her twenty-something friends have no understanding of how a business works.  Really? That’s still a surprise??

Could not agree more with your comment about liking the Upper East Side gallery girls, and how that’s mostly due to Chantal. Can’t wait to read your next article!

I’m glad you are doing this because I can’t watch the show without getting anxiety…(scene where Angela Pham thinks she’s a frustrated artist and says, while getting her hair done, “I just need to have an idea and like, work on it”) thanks for the sane and humorous perspective!

I have to sort of call BS on Kerri and the Lifestyle Management job. If you are a “really wealthy” person, you either have an Ex. Assistant at your job or have a secondary Personal Assistant. Your wife probably as her own as well.

As for episode # 2 and the bagels, if you have a private jet, the catering people get that for you beforehand. So this is just baloney.