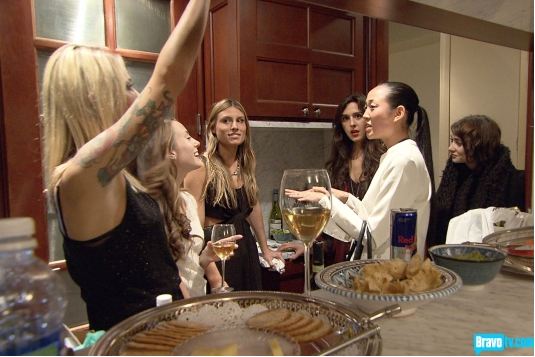 “We all like to party! Just not as much as Amy.” photo from bravotv.com

Let me just start this off by apologizing if this post seems less inspired than my previous four. You see, I’m lucky I remembered what day Monday was this week. And no, I don’t mean that it was “Gallery Girls” Day, I mean that it was a Monday at all. An example of my brain power this week: One evening on my way home from work I was SO EXCITED to come home, pop a frozen pizza in the oven, and watch a brand new episode of “Burn Notice” (my Thursday night show). About an hour later I realized that it was Saturday, not Thursday, that “Burn Notice” ended like two weeks ago, and that I hadn’t gone grocery shopping since its last new episode. Yikes.

My lack of brain power comes from the fact that the gallery I work for just moved locations, tripled its space, and is having its grand opening this weekend. It’s basically the most exciting thing ever. And I’m not even being sarcastic this time. So, I have been working my butt off to make our beautiful new space as perfect as I can. That “slight” Bravo addiction I told you about earlier? I might also have a “slight” addiction to my job too.

Episode four of “Gallery Girls” was the best BY FAR. Don’t get me wrong, this episode was very low on art but it was high on classic Bravo drama in the best way possible. Maybe I just loved it because it made the girls look more like bitches than my profession look like a joke. Who knows.

There were three main centers of contention in the episode. Shall we start with Maggie the hipster-hating UES intern? This episode highlighted Maggie’s birthday, her first with her boyfriend… honestly I don’t remember his name. BUT he has, somehow, convinced Maggie to have a small dinner with him for her birthday followed by a bowling party. Problems she found over these two events were as follows: he doesn’t order her food and wine for her, he didn’t buy her a giant cupcake from Crumb Bakery, he cut her too big a piece of chocolate cake, and he acts like frat boy when he hangs out with frat boys. #Gallerygirlproblems? I think not. But it was entertaining nonetheless.

Moving on. The second issue this episode is actually kind of art related. HOORAY. Angela, while scuttling around diners and doughnut shops taking photographs for her upcoming art show, finds out the super awesome venue she hoped to get for a steal wasn’t interested in hosting her exhibition. This is apparently a huge deal because she began promoting the event before the location was locked down. Just a small oversight. This is what happens when hype comes first, location comes second, and the art comes third. Priorities, girl, priorities. They will make your life sooo much easier. To be honest, I’m just impressed Angela showed any artistic initiative in this season at all. So props to her!

The final conflict of episode 4 came from basically everyone on the show hating on Amy, both behind her back and in her face. I actually got so uncomfortable during the scene where Amy brought cupcakes to Eli Klein Fine Art, as a pretense to ask Liz out for coffee, that I had to pause the episode like four times just to get through it. She might be a drunken mess but she JUST WANTS TO BE YOUR FRIEND, Liz.

One of my final comments about this episode is that I wish Klein had featured more prominently so I could have created a split screen image of him and Count von Count. Also, how awkward was that little Spencer exchange at Kerri’s party??? If there was a dislike button on things happening in real life, I’m pretty sure Chantal would have pressed hers. Hard.

Next time on ‘Gallery Girls’: Angela gets a venue for her art show… Kerri stirs up drama with Sharon and Amy…Maggie finally starts showing a backbone and looks for a job away from Dictator Eli… Claudia looks at some weirdo’s toilet paper rolls… And people wear creepy masks into EOC. Standard.

I love reading these! Keep it up Gallery Girl!

Bravo seems to be drifting from the premise. So many personality conflicts not seeming to do with art or the actual tasks of Gallery Girls. But, I’m not a TV fan. There must be intrigue.