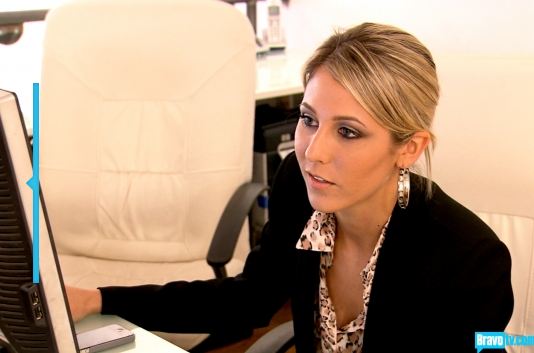 The beginning of the second episode of “Gallery Girls” started off with Claudia returning to End of Century after the opening rager, so let’s start this by checking in with the girls of EOC.  Surprise, surprise,  Claudia did all of the cleaning up while Chantal had a French press coffee, went to yoga, and arrived to work 2.5 hours late.  It must be nice to live in an imaginary land inside your own head instead of the real world.

Later, Chantal also provided the most unnecessary scene from the show.   Chantal getting a haircut took up a solid couple minutes of my life I will never get back.  Not only was it boring because IT WAS A HAIRCUT, all she did during it was talk about how she doesn’t get attached to her appearance (yeah right) and really doesn’t care what her boyfriend thinks about anything (poor thing).  To me, in episode one, Chantal was annoying but in a really entertaining way.  During this episode she just managed to be irritating without the entertainment making her plot line a total waste.

Back to EOC, Claudia is in hot with her two business partners because they have sold over two grand in jewelry and clothing and she has not yet sold a painting during their first month of operation.  Here’s the thing guys, I’ve worked in both art galleries and clothing boutiques and the fact of the matter is, selling clothes is just plain easier.  Clothes are worn every day and can be hidden away in closets when the owner isn’t feeling ‘em.  You just can’t do that with paintings.  I seriously felt for Claudia when the French clients brought in to see her exhibition got distracted by the clothes at the end of their meeting and simply signed the infamous mailing list.  If you haven’t figured it out by my previous posts, my mailing list and I have a serious love/hate relationship.

The big group activity for this episode was the Phillips de Pury auction.  I was impressed that all the girls took some sort of initiative and took notes.  However, it really annoyed me that while Kerri and Amy’s boss Sharon was bidding for an over-the-phone client on a Damien Hirst, we never got a clear shot of the Hirst!  I mean, I get it; the show is more about the dolla-dolla bills than it is about art, but is it too much to ask that we get a tiny glimpse of what these people are bidding on?  As far as entertainment goes, the only good moment of the auction was Claudia’s reaction to being asked if her shirt was on backwards (by someone making fun of her) which was to turn to Chantal and say, “Is my shirt on backwards?  It’s totally possible…”  That particular Liz Lemon-esque moment pretty much sums up the majority of my days and made me like Claudia a little more.

The goings on at Eli Klein basically revolved around Liz not doing work and Maggie getting every ridiculous job that Eli could think of.  At one point Maggie is forced to roll up shopping bags for people to use when their dogs go the bathroom during which she proclaimed, “Oh my God, this is making me dumber!”  Honestly, it probably is.  All I have to say about that is she should just be grateful she wasn’t asked to take her boss’ dog to the bathroom.  I have done that and, while the dog is really freaking cute, taking it potty was not the best moment of my life.  Particularly because once we got outside she forgot who I was and thought I was chasing her.  As you can imagine, it was a pretty special moment all around. 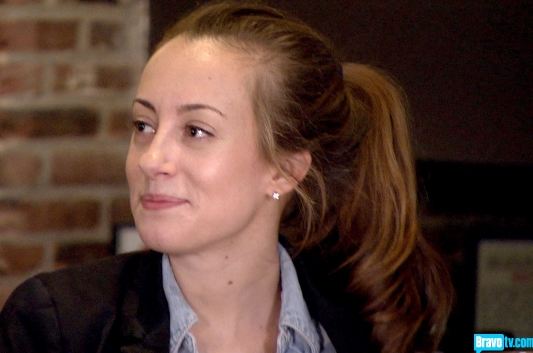 Later, during a super awkward after work drink that Liz declined to attend, Eli spends the entire time making  googly eyes at Maggie while grilling her about her new boyfriend.  At one point, Maggie asks him if he likes the new apartment he has moved into and Eli replies with a vague comment about how she’s seen them both so she should know.  I seriously hope she saw them during her short stint as his assistant where she supposedly had to pick up his underwear and help him put on socks but, sadly, I doubt that is the case.  Liz managed to do something productive and provide entertaining commentary on this situation saying, “Maybe Eli and Maggie will secretly get married have little midget babies with slick-back hair.” So on the nose Liz, maybe you’re useful after all.

Best outfit of the episode, along with best quote, goes to Angela.  This has nothing to do with art or galleries but neither does Angela.  During episode two she did basically exactly what she did in episode one, talk about herself and talk about boys.  Honestly, her dialogue gave me high school lunch flashbacks.  However, during one particular scene, while meeting up with a group of friends and wearing what I can only describe as the Seinfeld “pirate shirt” on crack, Angela spoke some of the best words ever spoken on television:

“So I wore my mating outfit.  I think I look like a big bird.  A mating bird.  A bird ready to mate.”

Oh Angela, with little gems like that I hope you never leave the show.  Even if you never EVER actually talk about art or show yourself, I don’t know, being an artist.  Unfortunately after a quick internet search I was unable to find a picture of this outfit, even under the “what were they wearing” photo album on Bravotv.com.  I’m assuming that’s because no one will actually want to look like that ever again.

Next week on “Gallery Girls”:

Amy gets drunk and yells at Maggie for making fun of her for being, well, drunk…The aforementioned pebble counting incident actually occurs. Someone should probably tell Eli that picking on girls to tell them you like them only works through elementary school…And Liz confronts her daddy issues.  Oh joy.

Casey, I’m glade you are previewing these Bravo episodes for us. Go right to the sarcasm and comparative episodes in your experiential Gallery Girl base. Awaiting what the Bravo script writers are admitting they know very little about. Hope you can stay with this project.

I swear it’s like you’ve recapped my thoughts while I was watching this episode! In all honesty, the set up for the not so turbulent Manhattan vs Brooklyn rift is half baked at best, but I’m confident the claws will definitely come out (albeit passive aggressively) back at EOC.